Mass vaccination site to offer shots to police, other officials

A state-run mass coronavirus vaccination site in Tokyo will start giving shots to police and other officials in charge of crisis management in addition to elderly people nationwide to fill vacant slots, the Japanese government said Monday.

The move comes as many slots remain vacant at the Tokyo venue and another state-run mass inoculation site in Osaka although the government has started allowing bookings from elderly people outside seven prefectures in the Tokyo and Kansai areas. 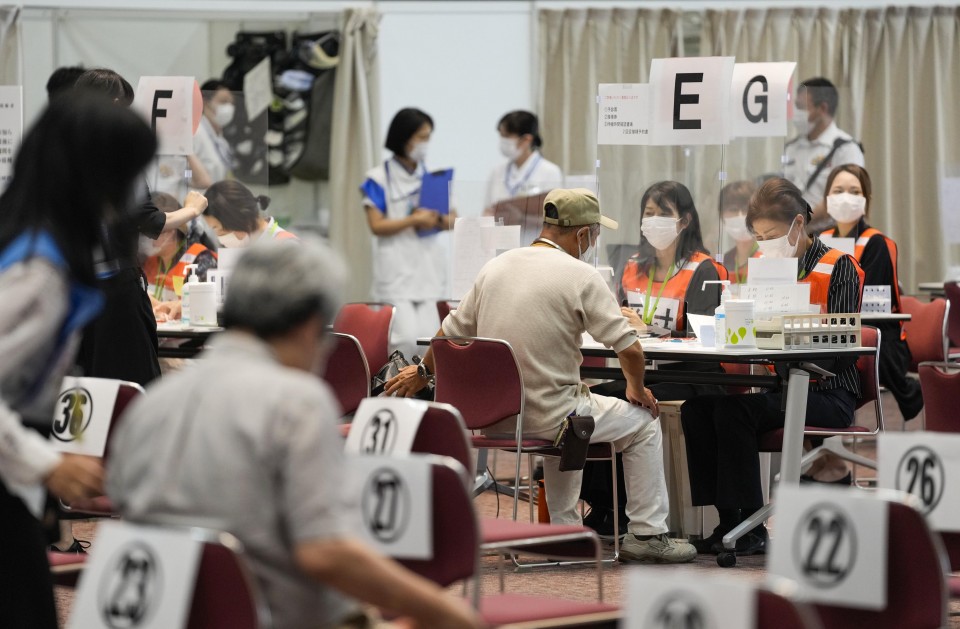 An elderly person undergoes procedures after getting a COVID-19 vaccine shot at a mass vaccination center in Osaka on June 14, 2021. Two state-run mass vaccination centers in Tokyo and Osaka began administering vaccines to elderly people from around Japan the same day, expanding the target areas from seven prefectures in the Tokyo and Osaka areas, as part of efforts to accelerate Japan's inoculation drive. (Kyodo) ==Kyodo

Over 60 percent of the slots remain vacant for two weeks through June 27, with the Tokyo site having capacity to administer 10,000 shots daily and Osaka 5,000. The two venues are run by SDF personnel.

As slots at the Osaka venue are filled through Wednesday, the government will consider starting to give shots to SDF members and certain officials from Thursday or later depending on the number of unfilled slots, government officials said.

"We are targeting officials in charge of crisis management such as disaster response as a temporary measure to effectively utilize inoculation capacity," a Defense Ministry official said.

"The timing and steps are being considered at the Defense Ministry," Kato said at a press conference, adding inoculating officials in charge of crisis management is "a temporary measure."

The two state-run venues were initially set up to give vaccine shots to people aged 65 or above living in the capital and the neighboring prefectures of Saitama, Chiba and Kanagawa, as well as in Osaka and nearby Kyoto and Hyogo prefectures.

"I am grateful I could be vaccinated. Staff were kind and I think its goodness is not being known. The government should provide more PR," said 74-year-old Takayoshi Sano, who traveled to the Tokyo venue from Ibaraki Prefecture, adding he would have needed to wait until July to be vaccinated in his municipality.

At the Osaka venue, 65-year-old Masazumi Matsushima, who said it took an hour to travel from Nara, added, "When I think of the travel distance, it's best to receive a shot from my doctor, but I couldn't get a reservation. I wanted to be vaccinated as early as possible."

The inoculation drive at the mass vaccination centers come in tandem with shots being administered at municipalities nationwide, mainly to health care workers and the elderly.

Japan's major airlines have begun administering shots at Tokyo's Haneda airport ahead of June 21, the date the government had expected companies and universities to start launching their own vaccinations aiming to speed up the process ahead of the Tokyo Olympics, which kick off in less than 40 days. 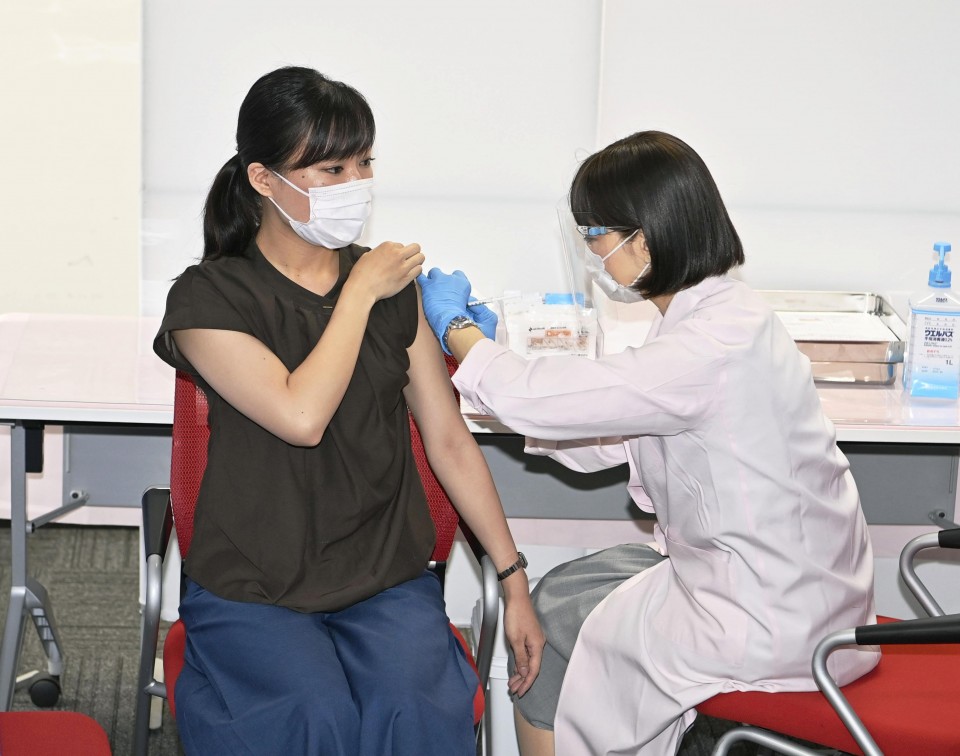 A Japan Airlines Co. flight attendant receives a COVID-19 vaccination at Tokyo's Haneda airport on June 14, 2021, as the airline began an inoculation program for employees. (Kyodo)

JAL aims to inoculate about 36,000 group employees, while ANA Holdings Inc., the parent of the major airline, said about 46,500 employees are eligible for the inoculation program with around 10,000 employees including pilots and flight attendants working on international flights given priority.

Other companies, including East Japan Railway Co. and trading house Itochu Corp., and universities are preparing to start vaccinations for employees or students on June 21.

As of 5 p.m. Friday, the government had accepted applications from companies and universities for inoculations for about 9.07 million people at 1,821 venues. A two-dose vaccine developed by U.S. biotech firm Moderna Inc. will be used.

Prime Minister Yoshihide Suga has said the country aims to complete the vaccination of those aged 65 or older, as well those turning 65 this fiscal year, by the end of July and finish vaccinating Japan's population against COVID-19 by November.

Japan's vaccination rollout was launched in February for health care workers and widened to senior citizens in April at sites run by municipalities, but the inoculation rate remains low compared with other industrialized countries.

Some municipalities have already started inoculations of those aged 64 or younger.