A just-enacted law in Japan to support children who need daily medical care and their families has laid bare the hardships such children face in entering the education system, including admission to nurseries and primary schools -- something the rest of society takes for granted.

Chihiro Kubo is the mother of one such child. Earlier this year she launched a drive to collect signatures online to support the efforts of legislators to tackle the issue. Targeting 2,000, she managed to gather 26,574 in just around a month.

Yuto was born in October 2019 with a large amniocele, a condition in which his intestines protrude through a hernia. He was finally released from hospital in August last year. 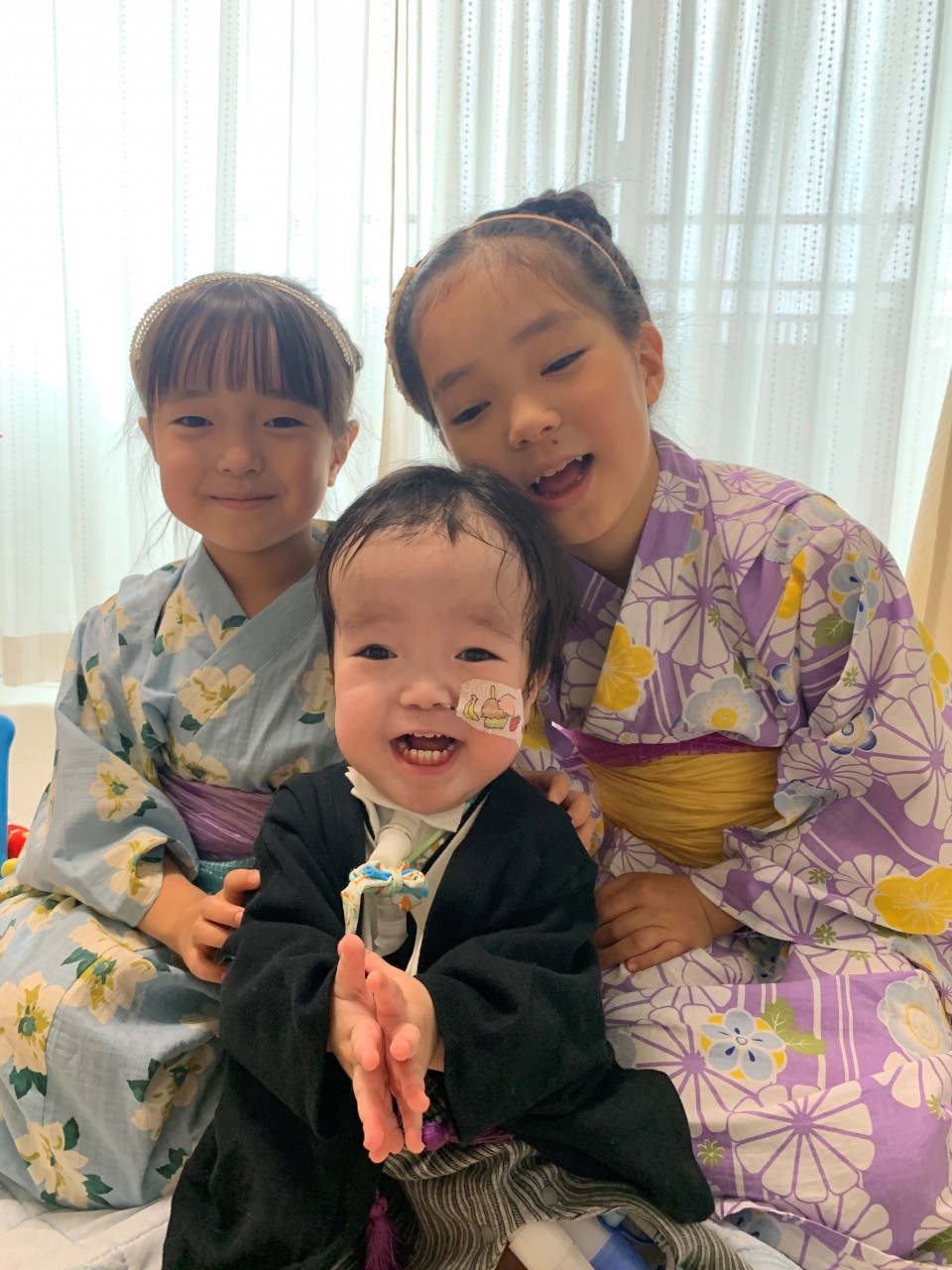 Photo taken on May 5, 2021, shows 1-year-old Yuto Kubo (C) and his sisters at their home in Tokyo's Setagaya Ward. Yuto uses an artificial respirator for breathing and feeding tube. (Photo courtesy of Chihiro Kubo)(Kyodo)

As he also had a lung disease, he needs to use an artificial respirator as well as a feeding tube, with his medical care mostly provided by Kubo, 37, at home in Tokyo's Setagaya Ward.

Kubo, a doctor by profession, used to work at an emergency hospital for seriously ill patients. But with the need to look after Yuto, Kubo, who also has two daughters, now works from home examining patients' CT scan and MRI data, partly because finding daycare for her son -- even for a short time -- has proven so difficult.

She was "shocked" to learn that, before Friday's enactment, no law to support kids such as Yuto existed. She said that she and other parents in her situation needed to use provisions from laws designed for elderly people and other adults to patch together support and were left feeling that kids in situations like Yuto's were not given legal definition.

The number of children aged under 20 who need daily medical care is estimated to total some 20,000 in Japan, with the figure having doubled in 10 years, according to the Health, Labor and Welfare Ministry. The sharp increase is due to progress in health care, leading to the survival of more children born with serious diseases.

Mothers of such children often take care of their children around the clock and are forced to stop working as they cannot find places to leave them, said Tomohiro Hongo, leader of volunteer group Wings, which supports families of children needing medical care.

It is a challenge for the children, especially those who need artificial respirators, to attend school daily, as they often require family members to both commute with them to and from school as well as accompany them while on the premises and because of a lack of medical staff there to provide necessary care on site.

"The families are also having trouble finding people with whom they can consult about their situations and feel at a loss as they are not taught which services they can use," Hongo said. "As a result, mothers get exhausted and cannot work."

Hongo, whose younger sister is the mother of a child requiring medical care, said such mothers often feel too burned out from raising their children to make their voices heard, while local governments are not even aware of how many such children exist.

"Welfare and society are lagging behind the advances made in the medical sector," Hongo said, adding that facilities offering welfare services have also lacked fiscal incentives.

The concept of children in need of daily medical care first appeared in the revised child welfare law in 2016, requiring local governments to "make efforts" to support them. But little progress was made to improve the environment surrounding the children and their families, with levels of local support varying considerably depending on where people live, experts say.

The latest legislation, five years in the making, was drawn up by a bipartisan group of lawmakers and obliges the central and local governments to offer assistance with the aim of helping children in need of daily medical care grow up physically and mentally sound and prevent their family members from having to leave their jobs.

The lawmakers include the ruling Liberal Democratic Party's Seiko Noda, who herself has a son needing daily medical care, and opposition member Yasuhiko Funago, who has been diagnosed with the progressive neurological disease known as ALS.

The law defines those in need of such support as children under 18 or high school students who need medical care on a daily basis, including breathing using artificial respirators and aspirators.

It says the central and local governments must ensure the children can receive education with others not needing medical care, regardless of where they live. It also obliges school operators to come up with necessary measures such as deploying nurses so the children can attend school without parental escorts. Prefectural governments must set up support centers for families.

"In Japan, the common practice of ensuring any child can grow up in a conducive environment is not often realized compared with other advanced countries," said opposition lawmaker Akira Nagatsuma on May 14, when he received the signatures collected by Kubo. He serves as lead opposition member of the House of Representatives committee on health, labor and welfare.

When Kubo started posting images explaining the legislation prior to collecting signatures, she was pleasantly surprised to find that the move was warmly welcomed even by people not involved with children needing daily medical care.

"In addition to delivering our signatures to lawmakers, I wanted to know how such children would be perceived by society, as supporting them involves the use of taxes," Kubo said.

As Kubo began communicating with mothers in similar straits on Twitter after Yuto was born, her campaign quickly garnered attention, was shared, and gathered steam.

"I thought the most important thing was to let everyone know about the existence of such children...knowing about this issue, people in society raised their voices to say this law is necessary. This is where its major significance lies," Kubo said.