Once valued by freight shippers as a cheaper option to the sea route between Asia and Europe but then losing customers in the turmoil after the collapse of the Soviet Union, the Trans-Siberian Railway, Russia's main artery traversing the Eurasian continent, is getting a refit.

Improvements are rapidly being made to allow both faster train speeds and bigger freight capacity in a bid to revive the line's leading logistical role in connecting Asia, where countries such as China have emerged as the driving force of the world economy, and Europe. 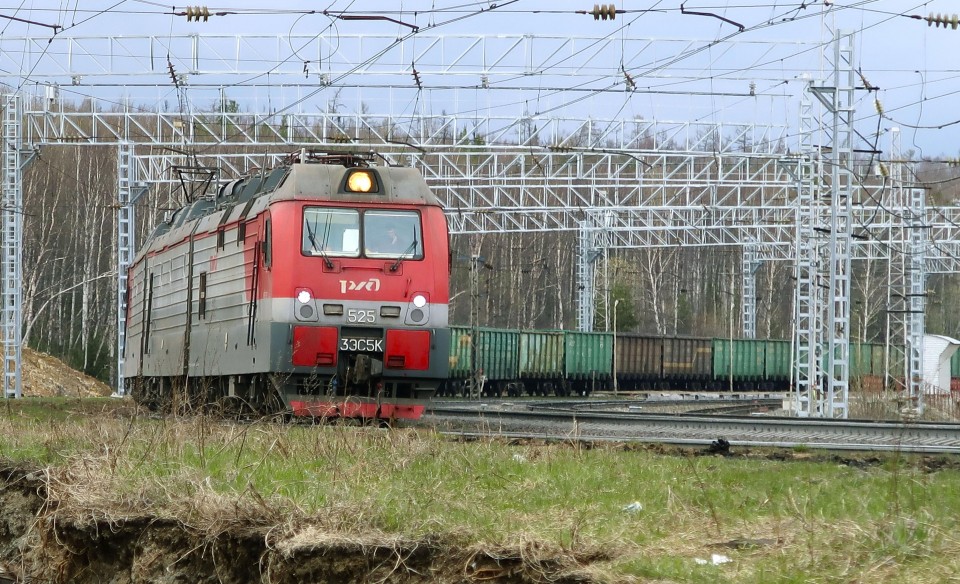 Photo taken on May 23, 2021, shows a Trans-Siberian Railway freight train running in Andrianovskaya, a suburb of Irkutsk, Russia. (Kyodo)

The renewed attention toward the railway, which is the world's longest at about 9,300 kilometers, also comes as the coronavirus pandemic causes a sharp decline in air cargo capacity, congestion at sea freight terminals, and soaring costs for shipments between Asia and Europe.

In late May, construction was under way in Andrianovskaya, southwest of Irkutsk, one of the major cities of the East Siberian economic region, to shave mountainsides in order to straighten the curve of the railway line.

Dump trucks came and went raising dust as they crossed unpaved roads, and about 60 workers had set up camps nearby. The work is part of a project to increase the average speed of the trains from 60 to 80 km per hour.

Sergei Fursov, an engineer for the eastern Siberian branch of the Russian Railways, said, "Improving speed is indispensable for service expansion. But we also need to reduce the risk of derailments, which tend to happen as trains get faster and longer."

The series of improvements will see the number of freight carriages increased by 20 percent, reaching a maximum length of 1 km. The railway is also working to resolve problems such as train delays and cargo damage -- issues that have been pointed out for many years.

The total freight transport capacity of the Trans-Siberian Railway and the Baikal-Amur Mainline, which traverses eastern Siberia and the Russian Far East north of and running parallel to the TSR, was 144 million tons in 2020, marking a 50 percent increase from 2012.

But under the pandemic, the number of passenger flights connecting Asia and Europe dropped significantly, which resulted in precipitous declines in air cargo capacity. As sea freight charges have also risen, transportation capacity connecting east and west has been under strain.

With the timetable of the Trans-Siberian Railway suffering from overcrowding, much expectation rests on work to completely remodel the Baikal-Amur Mainline as a bypass to expand freight capacity. With a view to exporting coal, oil, and timber along the line to Asia, construction work will proceed toward complete double-tracking by the end of 2024.

The Baikalsky tunnel, the second-longest railway tunnel in Russia with a total length of under 7 km, has been constructed in the mountains two hours from Severobaykalsk in the Republic of Buryatia. The double-tracking work has reached the final stages there. 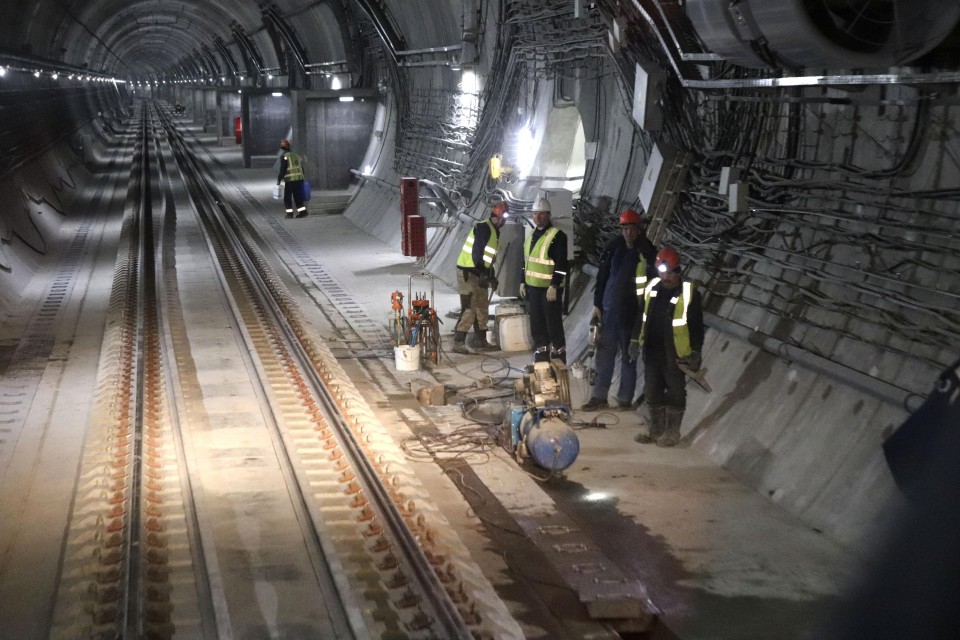 Photo taken on May 26, 2021, shows workers performing construction on the Baikal-Amur Mainline's Baikalsky tunnel in the mountains near Severobaykalsk in the Russian Republic of Buryatia. (Kyodo)

Vladimir Goncharov, deputy director in the department of construction preparation, said the expansion is aimed at supporting exports of resources especially to countries in Asia.

"We will support the expansion of resource exports to China, Japan and South Korea. It will also be useful for the development of areas along the railway line."

Among companies in Asian countries looking to benefit from the service expansions are two Japanese logistic firms. Hankyu Hanshin Express Co. and Toyo Trans Inc. have begun regular freight services with ships departing from Toyama New Port in central Japan's Toyama Prefecture and docking at Vladivostok, the largest Russian port in the Pacific Ocean and one of the line's terminuses.

The two firms ostensibly operate separate services but use the same shipping freight and train line. The cargo is transshipped to the railway in Vladivostok, bonded until arrival in Poland and transported throughout Europe.

Since the first shipment left port on Feb. 2, the freights have continued, more or less, at a pace of once every two weeks.

A spokesperson for Hankyu Hanshin said there has been steady customer demand and many inquiries.

Isao Takahashi, president of Toyo Trans, said disruption affecting international transportation during the pandemic has resulted in keen interest in the railway as an optional conduit.

"Containers are piling up at major European ports and ships are waiting offshore. There had also been a standstill in maritime routes due to the grounding accident that occurred in the Suez Canal," said Takahashi. "As efforts intensify for decarbonization, we are marketing new international logistic routes."

Aside from making improvements to the Trans-Siberian Railway, efforts are also under way to protect the environment from potential hazards that could result from boosting its capacity.

There is a section where the railroad tracks meet Lake Baikal, a UNESCO World Natural Heritage site dubbed "The Pearl of Siberia." European customers are paying close attention to protection of this cherished natural resource. 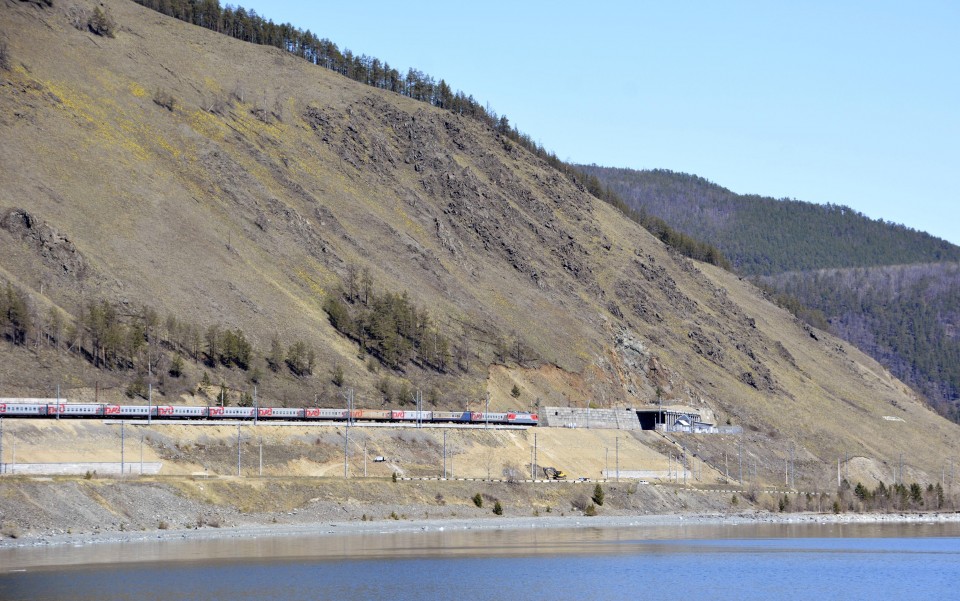 Photo taken on May 28, 2021 shows a passenger train running on the Baikal-Amur Mainline on the shores of Lake Baikal in Severobaykalsk in the Russian Republic of Buryatia. (Kyodo)

In 2019, an emergency response team base was set up along the Baikal Amur Mainline. Regular training will be conducted on ships and recovery vehicles to minimize the impact of freight trains derailing and oil reaching the lake. An official in charge estimates that recovery can be conducted within four hours.

The Russian government also plans to tighten its regulations. Vyacheslav Zdor, director for the center for environmental protection, said, "It is our responsibility to mitigate the environmental impact while developing the railway." 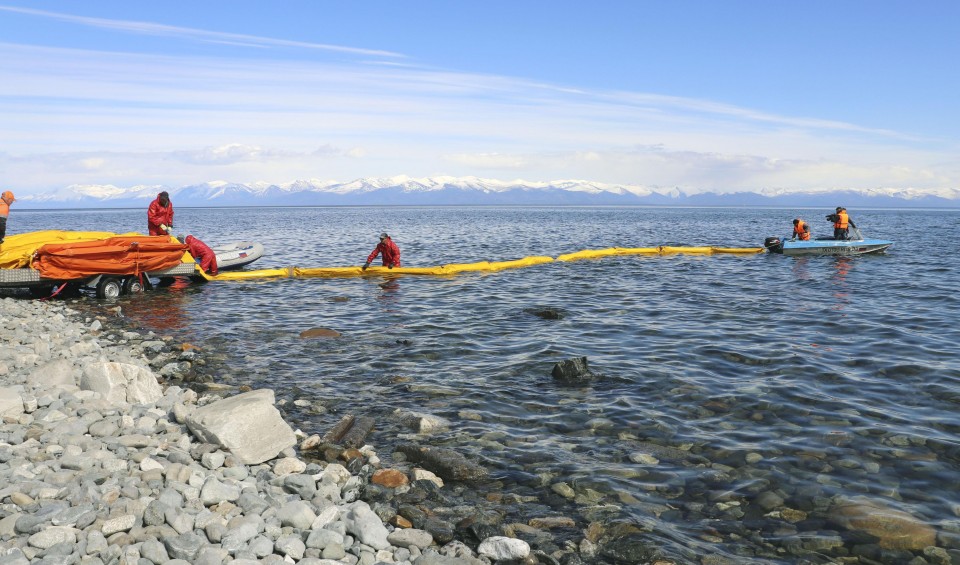 Photo taken on May 25, 2021, shows the Russian Railways' emergency response team conducting recovery drills, assuming an oil spill had occurred at Lake Baikal, in Severobaykalsk in the Russian Republic of Buryatia. (Kyodo)