Four U.N. human rights experts said in a letter revealed on Tuesday that the exclusion of students at Korea University from the Japanese government's cash handout program to mitigate financial difficulties amid the coronavirus pandemic was discriminatory.

The letter was sent to the government in February, and a month later the financial aid scheme ended. But Japan ignored the experts' views at that time, denying the claim in April that the scheme, which no longer existed, had discriminated against such minority students. 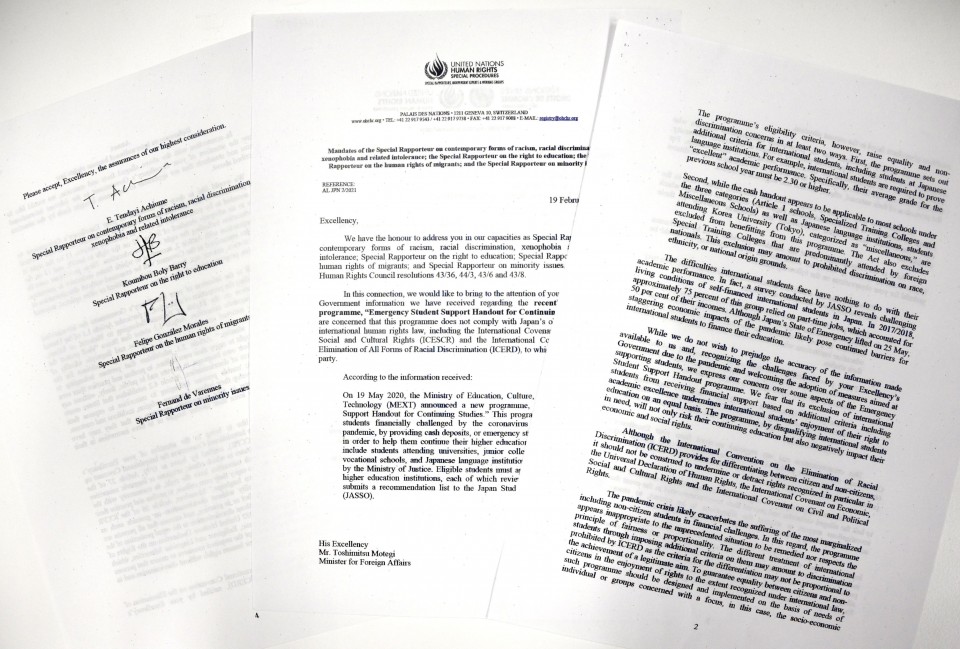 A copy of a letter, dated Feb. 19, 2021, by four U.N. special rapporteurs urging the Japanese government to correct criteria for its cash handout scheme for financially troubled students. (Kyodo)

The letter had been sent by Tendayi Achiume, special rapporteur on contemporary forms of racism, racial discrimination, xenophobia and related intolerance, and three other experts on the right to education, human rights of migrants, and minority issues.

The cash handout program was launched in May last year to offer up to 200,000 yen ($1,800) to financially troubled students in universities, junior colleges, and other schools such as the Japan campus of foreign universities.

But the scheme excluded students of Korea University in Kodaira in western Tokyo as it fell under a category of "miscellaneous schools" along with English language schools.

The experts said in the letter that they were "concerned that the program discriminates against students" attending certain schools "in particular minority students at the Korea University," characterizing such exclusions as posing the risk of undermining these school's institutional autonomy.

The letter went on to say, "For minority students, this further jeopardizes their access to an education that facilitates the promotion of their national, ethnic, cultural and linguistic identities."

They then asked the government at the time for "all necessary interim measures be taken to halt the alleged violations and prevent their re-occurrence."

The government said, though, that the cash handout program was not discriminatory as some Japanese students who are attending institutions not covered by the program are also not eligible.

While international students were also eligible for the handout, the education ministry required them to be among the top 30 percent of students.

Civic groups in Japan have criticized the scheme as discriminatory since its launch, with the International Movement Against All Forms of Discrimination and Racism, a nongovernmental organization, reporting the issue to the United Nations in June last year.