Leaders of the Group of Seven industrialized nations will gather in Britain on Friday to begin their first in-person meeting in nearly two years, seeking to showcase their unity to counter China's growing clout and tackle global challenges such as the coronavirus pandemic.

During the three-day talks, they will unveil a new initiative to provide financing for infrastructure in the developing world as an alternative to Beijing's "Belt and Road" project, while laying out a plan toward ending the COVID-19 pandemic, White House National Security Adviser Jake Sullivan told a press conference Monday. 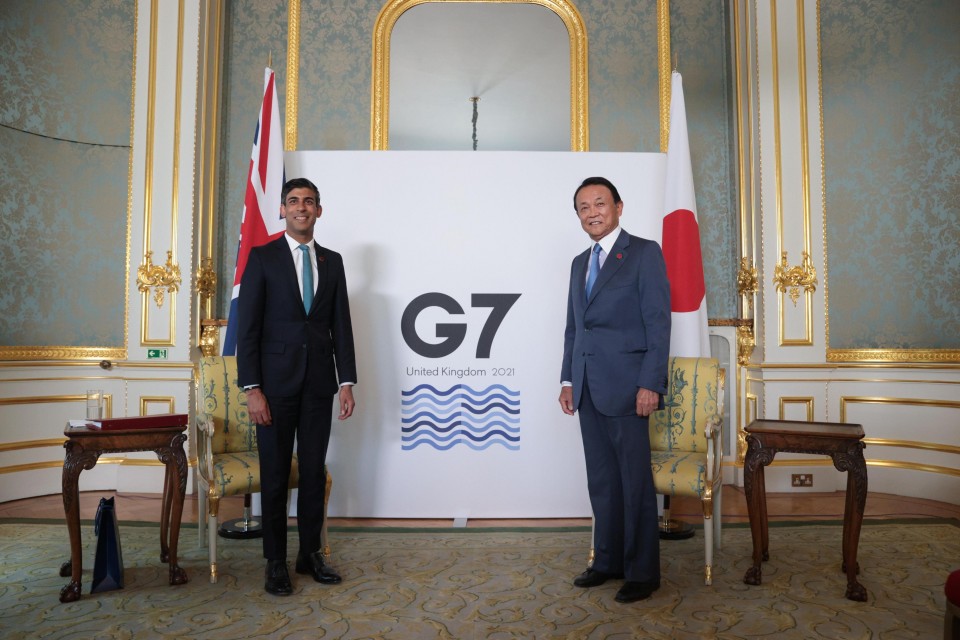 Britain's Chancellor of the Exchequer Rishi Sunak meets with Japanese Deputy Prime Minister and Finance Minister Taro Aso, on the eve of the G-7 Finance Ministers meeting, on June 3, 2021 in London. (Pool/Getty/Kyodo)

For Japanese Prime Minister Yoshihide Suga and U.S. President Joe Biden, the gathering in the seaside resort of Carbis Bay, Cornwall, will be the first G-7 summit they will physically attend since taking office in September and January, respectively.

The United States held the rotating presidency last year, but Biden's predecessor Donald Trump called the more than four-decade-old G-7 framework "outdated" and failed to host an in-person summit amid the pandemic and presidential election.

With Biden vowing to restore alliances and multilateralism, there is also likely to be more of a mood of unity among the leaders compared with the gatherings held during Trump's presidency, when he stood apart on trade and other issues based on his "America First" policy.

The overarching purpose of Biden's trip to Britain and other parts of Europe, which will be the first foreign travel of his presidency, is to "rally the world's democracies to tackle the great challenges of our time," Sullivan said.

China is expected to be a key topic at the G-7 summit amid concerns over Beijing's alleged human rights violations against the Muslim Uyghur minority in the Xinjiang region, its assertiveness in the East and South China seas, and its coercive economic policies including "vaccine diplomacy" through which the country aims to boost its influence.

Pundits are closely watching whether the G-7 members -- Britain, Canada, France, Germany, Italy, Japan and the United States plus the European Union -- can come up with a strong message regarding Taiwan, which is facing growing military pressure from Beijing.

China regards the self-ruled democratic island as a renegade province to be reunited with the mainland by force if necessary.

On the infrastructure initiative the G-7 are expected to roll out, Sullivan said it will be "a high standard, climate friendly, transparent and rules-based alternative to what China is offering."

Beijing has been criticized by the United States for its "debt-trap diplomacy" that allegedly lacks transparency in lending and can burden countries with high debt under its Belt and Road cross-border infrastructure project.

As the world continues to grapple with the pandemic, British Prime Minister Boris Johnson plans to call on his G-7 counterparts to make "concrete commitments" to help vaccinate the world by the end of next year.

Sullivan said the leaders are also expected to discuss climate issues and will work on an "action plan" aimed at increasing defenses against ransomware attacks after the United States saw critical infrastructure related to gas and food supply affected by hackers.

Japan, for its part, is seeking to win G-7 support for its efforts to stage the Tokyo Olympics from next month amid lingering skepticism over holding the global sporting event without the pandemic fully brought under control.

Bilateral meetings are expected to be held on the sidelines of the summit, with arrangements under way for Suga and Biden to hold their second face-to-face meeting following the Japanese prime minister's visit to Washington in April. 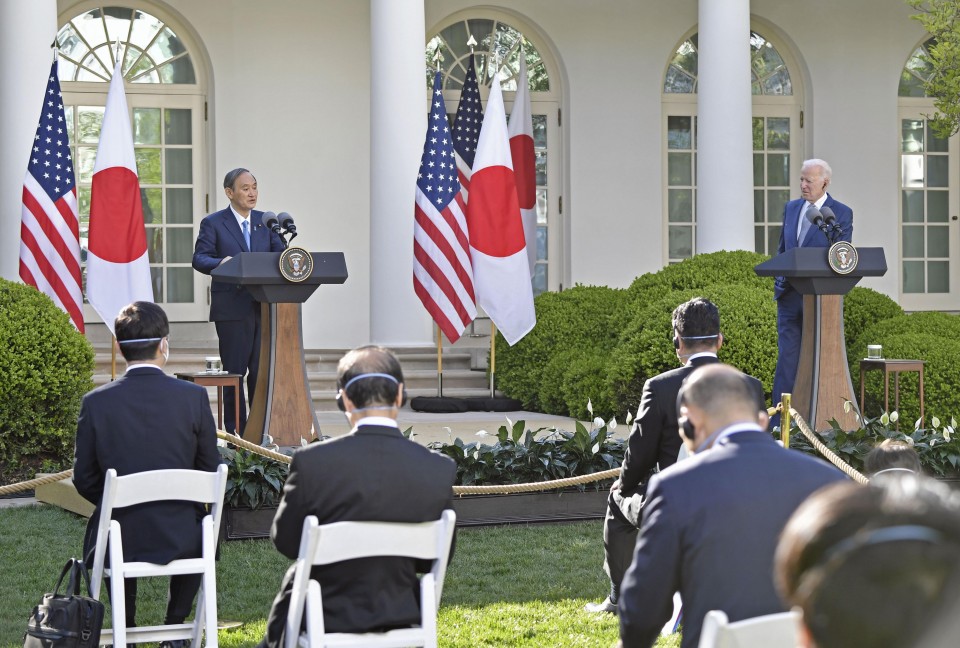 A trilateral meeting including South Korean President Moon Jae In may also take place, given that the country has been invited as one of the guests for this year's summit event.

If realized, it will be the first such meeting since 2017 as the Biden administration seeks to improve communication between its two key Asian allies -- Japan and South Korea -- whose ties remain soured due to long-running disputes over wartime compensation issues.

Suga may also hold talks respectively with his counterparts from Britain, France and Germany, which are increasing their engagements in the Indo-Pacific by such means as the dispatch of warships to waters where China is stepping up its territorial claims.

Other guest countries for this year's summit are Australia, India and South Africa. Together with Seoul, Canberra and New Delhi, the G-7 would form a group of the world's leading democracies known as the "Democratic 10" -- an idea proposed by Britain.

Indian Prime Minister Narendra Modi is not planning to travel to Britain for the summit, his government said in May, citing the pandemic that has hit the South Asian country hard.