Known for its pursuit of improvement and efficiency in auto production, Toyota Motor Corp. is using its know-how accumulated over years of being the top Japanese automaker to inject momentum into the rollout of COVID-19 vaccines.

At a vaccination center in Toyota, Aichi Prefecture, where the automaker is headquartered, the flow of people is being constantly checked and necessary adjustments are made to the layout of the facility and vaccine delivery to make sure crowds are not formed, and more importantly nothing is wasted. 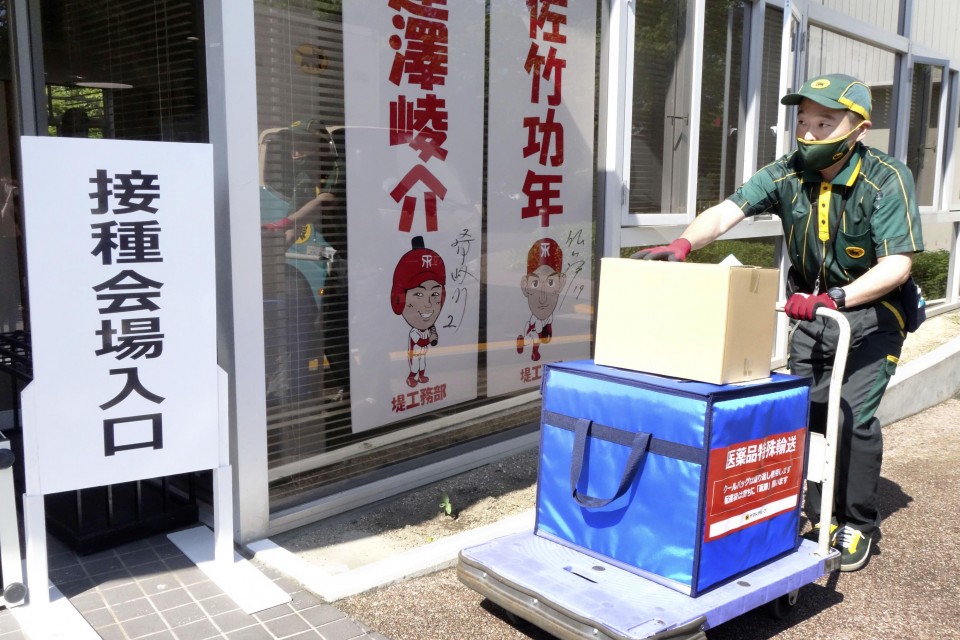 An employee of a trucking firm delivers vaccine to a mass inoculation venue in the Aichi Prefecture city of Toyota on May 30, 2021. (Kyodo)

"I got a shot much faster than I'd expected," an 81-year-old man said at the venue.

The time necessary for each person to get a shot is calculated there at 10 seconds for rolling up the sleeve and 90 seconds for one shot.

Japan is seeking to speed up its vaccine rollout, which is still very slow compared with countries like Britain and the United States. Japan has been giving priority to people aged 65 and older before younger generations can get shots. Vaccinations at universities and workplaces are expected to start on June 21.

By Tuesday, some 8 percent of the country's 126 million population had received at least one shot of COVID-19 vaccine, with the Tokyo Olympics less than two months away.

"Just-in-time" -- producing exactly when it is needed and keeping minimum inventory -- and "Kaizen (improvement)" are critical factors in Toyota's vehicle production system that has allowed it to aim for higher profitability.

These concepts have proven useful for the COVID-19 vaccination campaign and Toyota is seeking to help municipalities across the nation, too.

If the waiting area for people who received shots is getting crowded, the layout of chairs is quickly changed, an example of "Kaizen."

"Ideally, people need to flow like they are drawn into (each section)," a Toyota official said.

Vaccines are also delivered at the right time.

Normally, refrigerated vaccines are delivered to designated places for inoculation and in that case they can be used for five days.

But the combination of Toyota's inventory management skills and delivery service provider Yamato Transport Co.'s expertise has extended the period to six months as vaccines are transported frozen at minus 60 C or lower.

An ultracold freezer developed by ADD Co., based in Shizuoka Prefecture, central Japan, is used in the delivery scheme.

"Toyota's business is built on a safe and secure society," said a Toyota executive who led the vaccination efforts in the city of Toyota. "We'd like to contribute to the vaccination of as many people as possible."