With the eyes of the world on Japan during the Tokyo Olympics, Gon Matsunaka, head of the country's first permanent LGBTQ community center, hopes the games will prove a catalyst in fostering a society in which discrimination is no longer accepted and diversity is embraced.

Matsunaka, who has dedicated himself to improving the rights of sexual minorities, has personally experienced the anxiety and difficulties commonly confronted by lesbian, gay, bisexual, transgender and queer or questioning people in Japan, ranked among the lowest of developed countries in legal inclusivity for those groups. 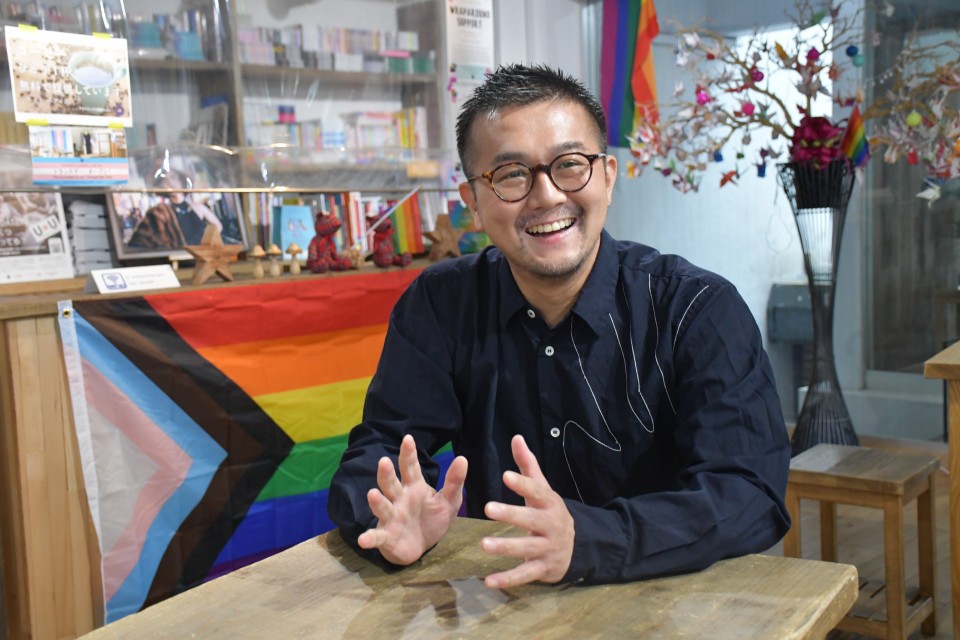 Gon Matsunaka, head of Pride House Tokyo Legacy, speaks at an interview at the LGBTQ community center on May 27, 2021. (Kyodo)

"It is our community's wish that the Olympics and Paralympics will become a transitioning point. Since the world will focus on Japan, we want to use that attention to drive change," Matsunaka, who leads Pride House Tokyo Legacy, said in a recent interview.

The LGBTQ hub, located on the second floor of a building in the capital's thronging Shinjuku district, is the latest to join the Pride House movement that began at the 2010 Winter Olympics in Vancouver. The mission is to welcome LGBTQ athletes, fans and their supporters, while also providing learning opportunities.

Operated by a consortium consisting of nonprofit groups, 15 Tokyo Games sponsors and 21 embassies, the center, decorated with rainbow flags, contains over 1,000 books, a small cafe and space for counseling. The door is open to anyone.

The 45-year-old Matsunaka said the Tokyo Games, set to open on July 23, are "not just any Olympics and Paralympics" due to organizers' stated ambition to push for wider diversity and improved inclusivity.

The International Olympic Committee charter stipulates individuals must not face discrimination of any kind and the reference to sexual orientation was included in the code after Russia held the 2014 Sochi Winter Games amid international concern and commentary over its anti-gay legislation.

With its "Unity in Diversity" slogan aimed at building a world that is more tolerant of difference, Tokyo may now be able to boast the first transgender athlete to ever compete at an Olympics. New Zealand weightlifter Laurel Hubbard is expected to compete in the women's over 87-kilogram category, her entry coming after the IOC adopted in 2015 new guidelines for transgender athletes.

"Sports have been considered the final frontier in Europe and the United States, where understanding (of sexual minorities) has developed at schools and workplaces. Sports are said to be the area where discrimination is most severe," Matsunaka said.

"But in Tokyo, we want to change many aspects in society, not just sports. Our focus goes beyond sports," he said.

Under an official program running alongside the Tokyo Games, members of the consortium have taken on different projects, including holding a discussion session on creating safe spaces for LGBTQ people at universities and companies, as well as staging pride events.

During a visit to the center in April, Seiko Hashimoto, president of the Tokyo Games organizing body, said, "As for the understanding of sexual minorities, it is the duty of the organizing committee to engage in the sorts of activities that could allow people to think of the Tokyo Games as a turning point." 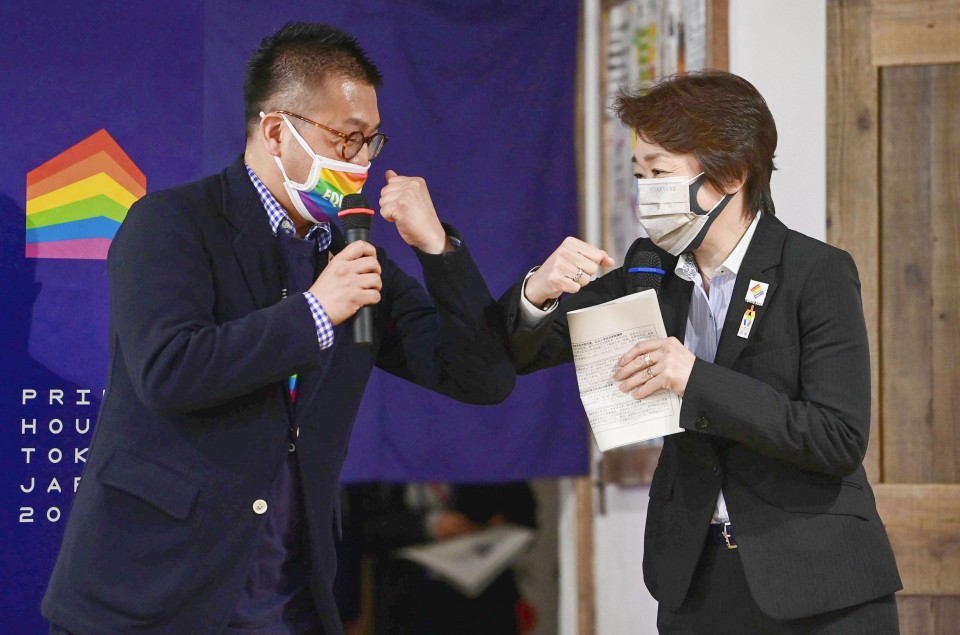 Having operated during the 2019 Rugby World Cup, the LGBTQ house was initially set to open for a limited time to coincide with the Olympics and Paralympics in 2020.

But it became a permanent facility in October as the novel coronavirus has swept the world, forcing many people to stay at home as much as possible to prevent the spread of infections.

The operators saw the need to offer a place for sexual minorities, especially young people, who have increasingly said they are feeling more uneasy about not having access to support networks they had pre-pandemic.

Since its opening, the center has received more than a thousand visitors from a wide age group. There have been high school students coming as part of classes, or parents bringing a child who has questions around sexual identity to talk to the staff to learn more.

In Japan, about one in 11 people identify as LGBT or belonging to another sexual minority group, according to a survey by Japanese advertising agency Dentsu Inc. But people say the country lacks support infrastructure, both from the psychological and legal aspects.

Japan is the only country among the Group of Seven industrialized economies that has not legalized same-sex unions, while the Organization for Economic Cooperation and Development placed the country at 34th among 35 on ensuring equal rights for sexual minorities.

Japan's main ruling party decided against submitting to this year's ordinary session of parliament that ended Wednesday a bill to promote greater public awareness of sexual minorities, a call that advocacy groups say goes against the core values of the Olympics. 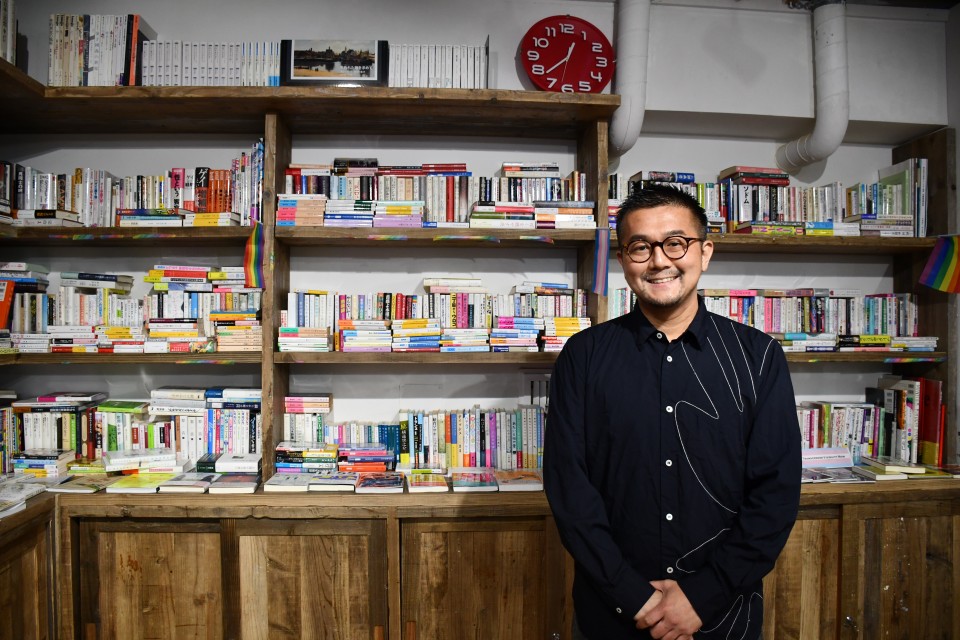 Gon Matsunaka, head of Pride House Tokyo Legacy, stands in front of hundreds of books related to the LGBTQ community at its facility on May 27, 2021. (Kyodo)

Matsunaka is also apprehensive that an explanation about LGBTQ is not included in many textbooks for elementary and junior high school students. "This is dangerous," he said, because children who think they may be gay or transgender do not get access to sufficient information during a crucial time and the lack of knowledge can also lead to bullying.

A native of the central Japan city of Kanazawa, Matsunaka said he became aware that he was gay during his elementary school years, and he does not have very positive memories from growing up. He felt unable to confide in his parents or his siblings and left for Tokyo to attend Hitotsubashi University.

While he kept his sexual orientation hidden during his school years in Japan, telling his friends that he had a girlfriend amid pressure to fit in, it was when studying abroad for about a year at the University of Melbourne he was able to come out to his peers.

At the Summer Games in 2016, Matsunaka was in Rio de Janeiro with his previous job with Dentsu. Thinking about the Tokyo Games four years later, he said "it was like a dream" to be able to make the most of the sporting extravaganza as a platform to improve the environment for the LGBTQ community.

But when in the Brazilian city, Matsunaka heard that a Hitotsubashi University graduate student had died the previous year when he had plunged from a building on campus in an apparent suicide. The man was outed as gay by a fellow student on a messaging app.

Hearing the news, Matsunaka said he could not breathe as he thought about the plight of the man and how close it was to home for him. The incident influenced his decision to quit his job with the advertising agency and change the direction of his life.

Following a one-year postponement because of the pandemic, the Tokyo Olympics will be different from any other games. There will be no spectators from abroad, and athletes will not be able to casually visit a place such as the LGBTQ center due to COVID-19 restrictions on movement.

"We just have to do whatever that can be done. We had been considering how to provide visitors from abroad a safe place or how to share information with athletes, but now we are thinking about what we can do," Matsunaka said.

"There is so much that needs to be done, we just need to select what we can do," he said. 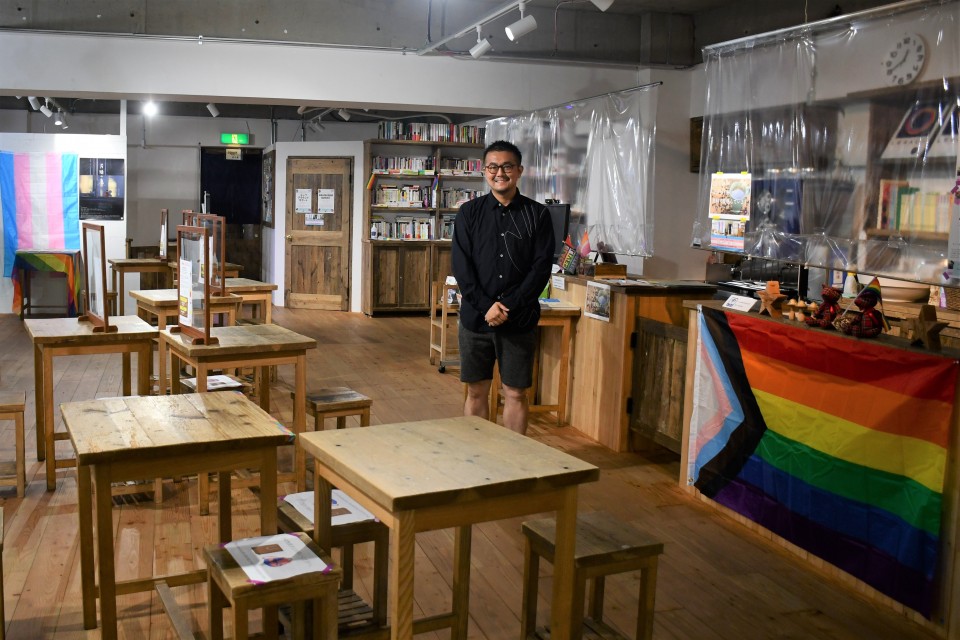 Gon Matsunaka poses for a photograph at Pride House Tokyo Legacy on May 27, 2021. (Kyodo)