The total population on the Chinese mainland grew to 1.41 billion in 2020 but the proportion of those aged 60 or older also increased, government data showed Tuesday, reinforcing fears about a decline in the national strength of the world's second-biggest economy.

The release by the National Bureau of Statistics of the population data based on a once-a-decade census comes as the nation's population is expected to begin falling in a few years' time, ending a five-decade trend of growth.

The bureau had planned to release the results in early April, but postponed doing so. It later said the population had grown in 2020 and concrete figures would be shown when census data was released.

Amid mounting concern that a possible shrinkage of the population could undermine economic development, the leadership of Chinese President Xi Jinping has become cautious about dealing with demographic data, sources close to the matter said.

If the population decreases in China, it would be the first since the catastrophic Great Leap Forward from 1958 through the early 1960s, regarded as a misguided economic policy initiated by Mao Zedong, caused millions of people to starve at home.

Chinese people aged 60 and over accounted for 18.7 percent of the total population, 5.44 percentage points higher than the level in 2010, when the previous census was conducted.

Ning Jizhe, a senior bureau official, said at a press conference that the aging of China's population is "deepening" and the country needs to implement measures to ensure "balanced population growth." 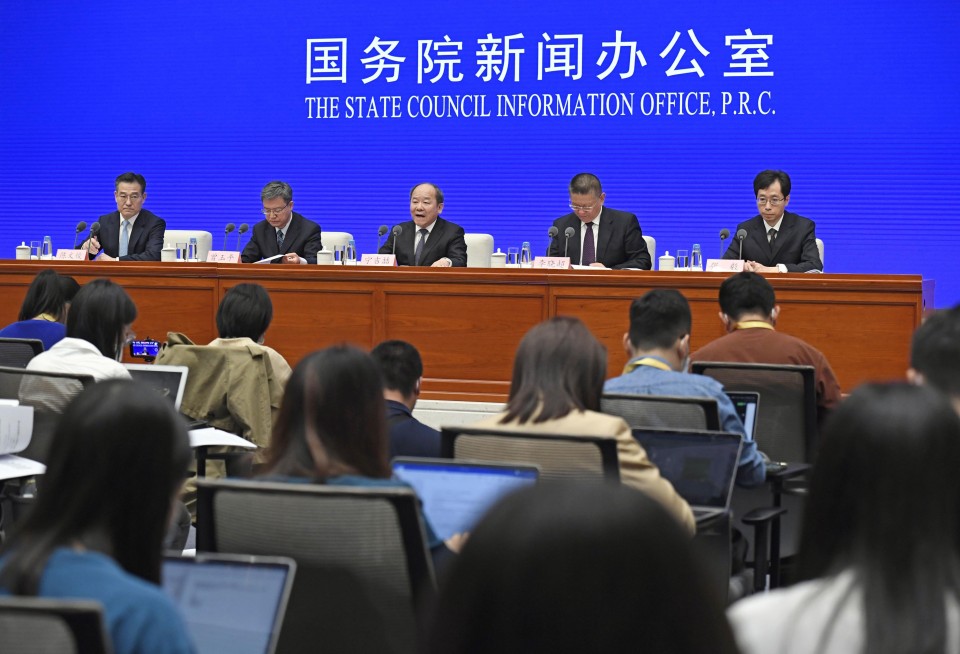 The National Bureau of Statistics of China holds a press conference in Beijing on May 11, 2021. The total population on the Chinese mainland came to 1.41 billion in 2020, up from 1.40 billion in the previous year, according to data released by the bureau. (Kyodo) ==Kyodo

The Global Times, a tabloid affiliated with the ruling Communist Party, said late last month that the government would be forced to take steps to encourage births in the next few years, such as subsidizing couples who choose to have more than one baby.

China should avoid "becoming another Japan," the newspaper said, adding the nation's population is likely to start shrinking as early as next year.

The population of China, excluding Taiwan, Hong Kong and Macau, exceeded 1.4 billion by the end of 2019 for the first time since Mao founded the Communist-led People's Republic of China in 1949.

China's population, meanwhile, has been aging, due largely to its decades-long "one-child policy." The policy, introduced in 1979, was scrapped in 2016 with expectations growing that a rapidly aging population will constrain the country's economic expansion.

The government has recently allowed all married couples to have a second child, but a baby boom has not occurred in China so far.