Retired wing Kenki Fukuoka won the Player of the Year award for the 18th and final Top League season on Monday after helping Panasonic Wild Knights to the title against Suntory Sungoliath in the final.

The 28-year-old capped his career by scoring a try during the 31-26 win on Sunday, propelling Panasonic to their fifth Top League title and his first. The former Japan international is leaving the game to concentrate on medical school. 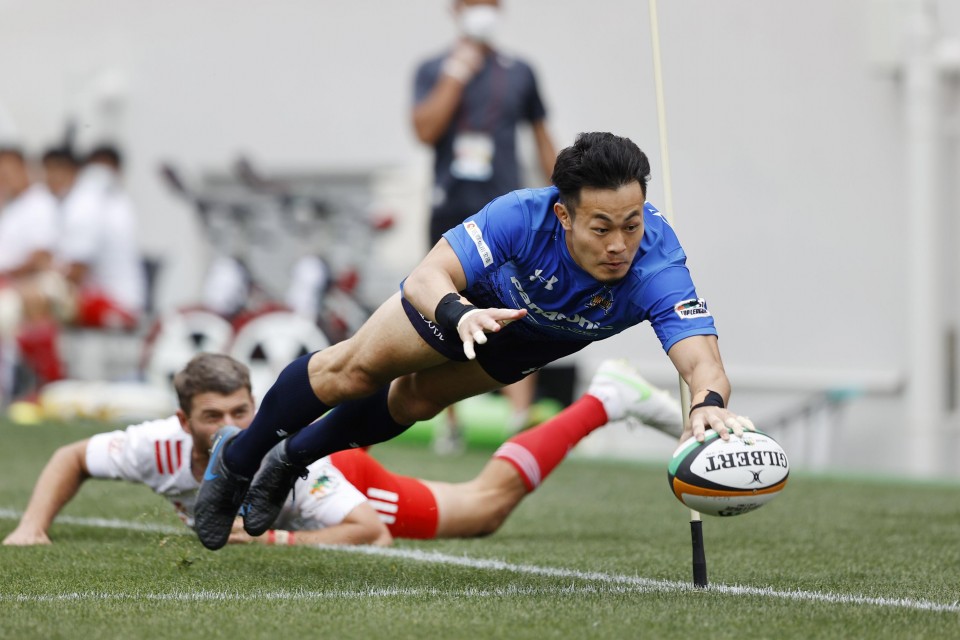 Kenki Fukuoka scores the opening try during the first half of Panasonic Wild Knights' 48-21 semifinal win over Toyota Verblitz in the Japan Top League knockout tournament at Hanazono Rugby Stadium in Higashiosaka, Osaka prefecture, on May 15, 2021. (Kyodo) ==Kyodo

"I'm really honored to receive the highest accolade in my retiring and final Top League year," Fukuoka said during an online ceremony. He received the top award for the first time while also making the Best XV for the third straight season.

"(The retirement) hasn't sunk in," he said. "I was blessed with a wonderful environment and teammates. I really feel I had luck on my side."

Panasonic prop Keita Inagaki, a teammate of Fukuoka also for Japan after playing the 2015 and 2019 World Cups together, made the Best XV for the seventh straight season.

Suntory's New Zealand star Beauden Barrett won the prize in the flyhalf position ahead of his return to the Blues following a one-year deal in Japan.

The 29-year-old All Black lauded the high playing standard of the leading Top League teams, claiming the top six to eight can match those of the Super Rugby sides. He also expressed his desire to one day return to play for Suntory along with his younger All Black brothers Scott and Jordie.

Fullback Ayumu Goromaru, whose performance at the 2015 Rugby World Cup in England made him a household name in Japan, received a special award after retiring this year as the all-time leading point scorer for the Top League with 1,282 points playing for Yamaha.

"I'm proud to be leaving the game as the leading scorer, and together with the Top League," the 35-year-old said.

The Top League will be replaced by a new three-tier setup starting in January.