A total of 28 prefectures and large cities in Japan are either planning or considering setting up large-scale coronavirus vaccination sites to expedite inoculation of elderly people, a Kyodo News survey showed Saturday.

About 90 percent of such local governments will use the vaccine developed by Moderna Inc. of the United States and approved by the health ministry on Friday. 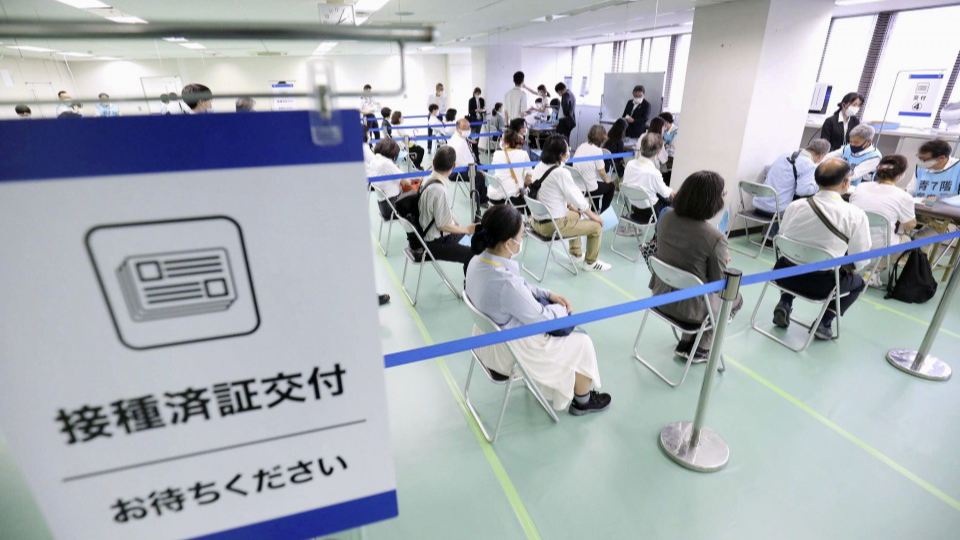 A rehearsal is held at a mass COVID-19 vaccination center in Tokyo on May 21, 2021, for inoculations to be administered by Self-Defense Forces doctors and nurses targeting senior citizens and beginning May 24. (Kyodo) ==Kyodo

Miyagi, Gunma, and Aichi prefectures will open their venues on Monday, followed by the city of Kobe on Tuesday, according to the survey conducted on 47 prefectural and 20 municipal governments from Tuesday to Friday.

The central government will begin vaccinations at state-run mass vaccination sites in Tokyo and Osaka on Monday as it aims to complete the vaccinations of the elderly by the end of July.

Japan's vaccination program lags behind other developed countries. Since its launch in February, beginning with health care workers and later expanding to people aged 65 or older, only around 4 percent of the country's population of 126 million has received at least one dose.

Osaka city is aiming to vaccinate around 3,500 people per day, the highest target among the 28 local governments.

Prime Minister Yoshihide Suga has vowed to ramp up vaccinations to 1 million shots a day in the country.

However, a number of local governments face challenges in securing enough doctors and nurses to administer the shots due to limited medical resources, among other reasons. It is unclear whether inoculations at those sites will proceed smoothly.

Notable challenges mentioned in the survey included "securing doctors and other personnel," "appointment systems without causing confusion," and "handling of cancellations on the day of vaccinations."