The total as of Sunday increased 34 from the previous day, while the hospital bed occupancy rate for people in serious condition has topped 50 percent in some prefectures, including Osaka and neighboring Hyogo, which have been under a state of emergency since late last month with Tokyo and Kyoto. 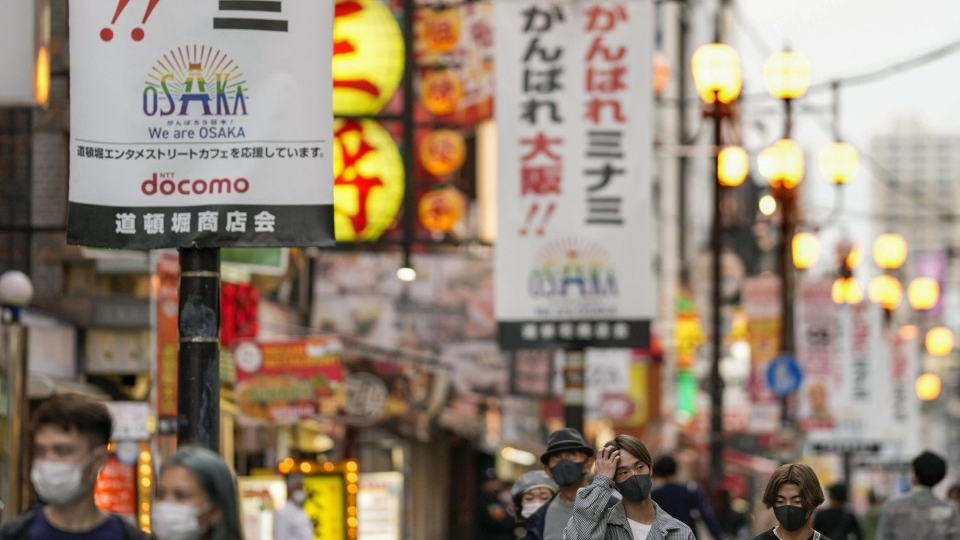 People wearing masks to protect against the novel coronavirus walk in Osaka's Minami area on May 1, 2021. (Kyodo) ==Kyodo

In Osaka and Hyogo, the number of coronavirus patients recuperating at locations such hospitals, hotels and homes as of last Wednesday was double the peak of the "third wave" of infections seen in January, according to the health ministry.

As highly contagious variants of the virus rage in western Japan, 17,689 COVID-19 patients in Osaka represent a 2.8-fold increase compared to Jan. 20 when hospital bed availability was previously at its tightest. Hyogo reported 4,706 patients, a 2.4 increase.

Under the state of emergency, due to be effective through May 11, authorities have imposed stricter anti-virus measures including requiring restaurants serving alcohol and large shopping facilities to close.

But Osaka and Tokyo reported on Monday 847 and 708 new cases of COVID-19, respectively. Across Japan, the daily number of confirmed infections totaled 4,470. 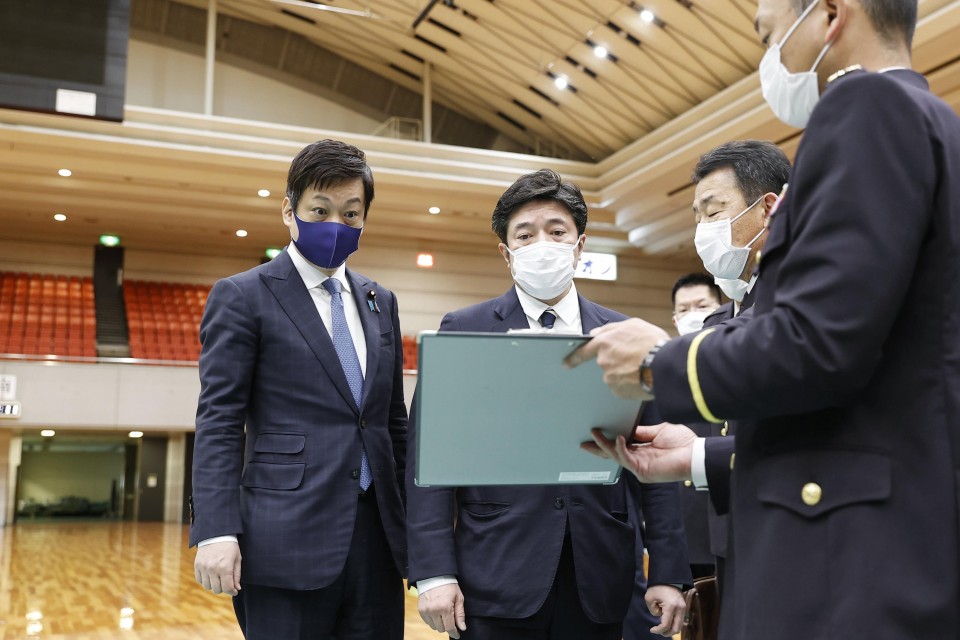 With Japan lagging behind other advanced countries in its vaccine rollout, the government plans to set up large-scale inoculation centers in Tokyo and Osaka to be staffed by Self-Defense Forces doctors and nurses, separately from similar vaccination efforts being made by local municipalities.

After the visits, Nakayama, who heads the Defense Ministry's headquarters on planning the centers, told a press conference the inoculation center is expected to open on May 24 at the convention facility.

At the facility, the government is considering inoculating not just residents of Osaka but also residents of neighboring Kyoto and Hyogo prefectures.

Separately, the government plans to open a large-scale vaccination center on May 24 in a government building in the Otemachi business district in Tokyo that will be open from 8 a.m. to 8 p.m. everyday including weekends and national holidays.

The vaccination centers will exclusively offer Moderna Inc.'s vaccine, rather than the vaccine developed by Pfizer Inc., which is currently used by municipalities across Japan. The Moderna shot has been under review by the health ministry and is expected to get the green light for usage in the country later this month.

Japan began its vaccination program in mid-February, starting with health care workers. Inoculations for those aged 65 and older began in mid-April.

About 900,000 people aged 65 or older residing in the capital and neighboring Kanagawa, Chiba and Saitama prefectures, or 10 percent of the elderly in the area, are expected to use the Tokyo center, which will be capable of administering 10,000 shots a day.

Prime Minister Yoshihide Suga has said the government aims to finish inoculating the country's 36 million elderly people by the end of July, which would require the rollout to speed up significantly.