The prolonged coronavirus pandemic is likely to lead to a widening of the gender gap in Japan, already the worst among major advanced countries, unless the government takes action, a Cabinet Office panel said recently.

In a report compiled in late April, the panel of experts said the crisis has led to an increase in domestic violence cases and suicides among women while hitting them harder financially as many have lower-paid nonregular jobs in badly affected sectors such as restaurants and hotels. 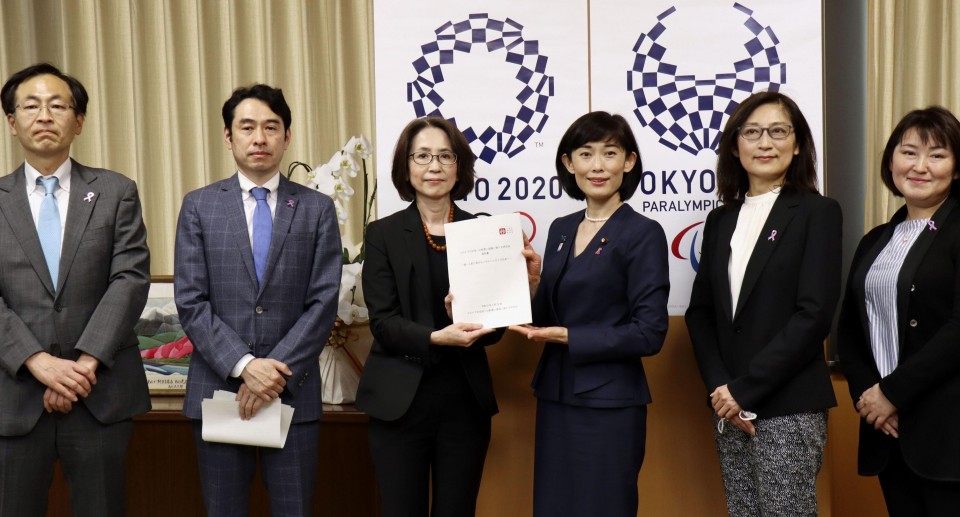 Tamayo Marukawa (3rd from R), Japan's minister in charge of gender equality and women's empowerment, receives a report on the impact of the coronavirus pandemic on women from an expert panel member at the Cabinet Office in Tokyo on April 28, 2021. (Kyodo)

The paper said an entrenched view that men were breadwinners and women responsible for household chores and childrearing was still holding women back in society despite "rapid changes in individuals' work styles and family forms."

For example, women working from home are still expected to do more housekeeping chores even if their spouses telework, the report said, while adding that the pandemic has also highlighted the severe situation faced by young women, single mothers and unmarried female nonregular workers.

The government should come up with policies to boost financial support for women and promote their empowerment, according to the paper, which was submitted on April 28 to Tamayo Marukawa, the minister in charge of promoting gender equality.

"The fallout from the pandemic is unpredictable and an additional impact may arise later. We will continue to discuss measures" to support women, Marukawa said on receiving the report.

The government plans to compile a policy package in June to address urgent issues such as measures against the rise in domestic violence and suicides among women.

Japan ranked 120th among 156 countries in the gender gap rankings in 2021 released in March by the World Economic Forum, a Swiss-based think tank.

The number of domestic violence consultations in Japan including those made online surged around 50 percent between April 2020 and February 2021 from a year earlier to 175,693, according to the Cabinet Office.

Meanwhile, the number of suicides by women in 2020 rose 935 from the previous year to 7,026, with the figures especially rising among the unemployed and high school students, the panel report said, citing National Police Agency data. The figure for men edged down 23 to 14,055 in the same period.

Financial hardship, domestic violence and mental illness were among factors behind an increase in women's suicides, all issues that became more serious amid the pandemic, according to the report.

Noting that single mother households and unmarried women are particularly struggling amid the pandemic, the panel stressed the need to improve labor conditions for nonregular workers and help them find jobs in the growing digital industry.