Chinese President Xi Jinping on Friday told International Olympic Committee chief Thomas Bach that his country will support the holding of this summer's Tokyo Games, as the novel coronavirus outbreak has shown few signs of easing soon in Japan.

The official Xinhua News Agency also quoted Xi as saying during a telephone conversation with Bach that China is confident in hosting the Beijing Winter Olympics and Paralympics next year on schedule despite the pandemic. 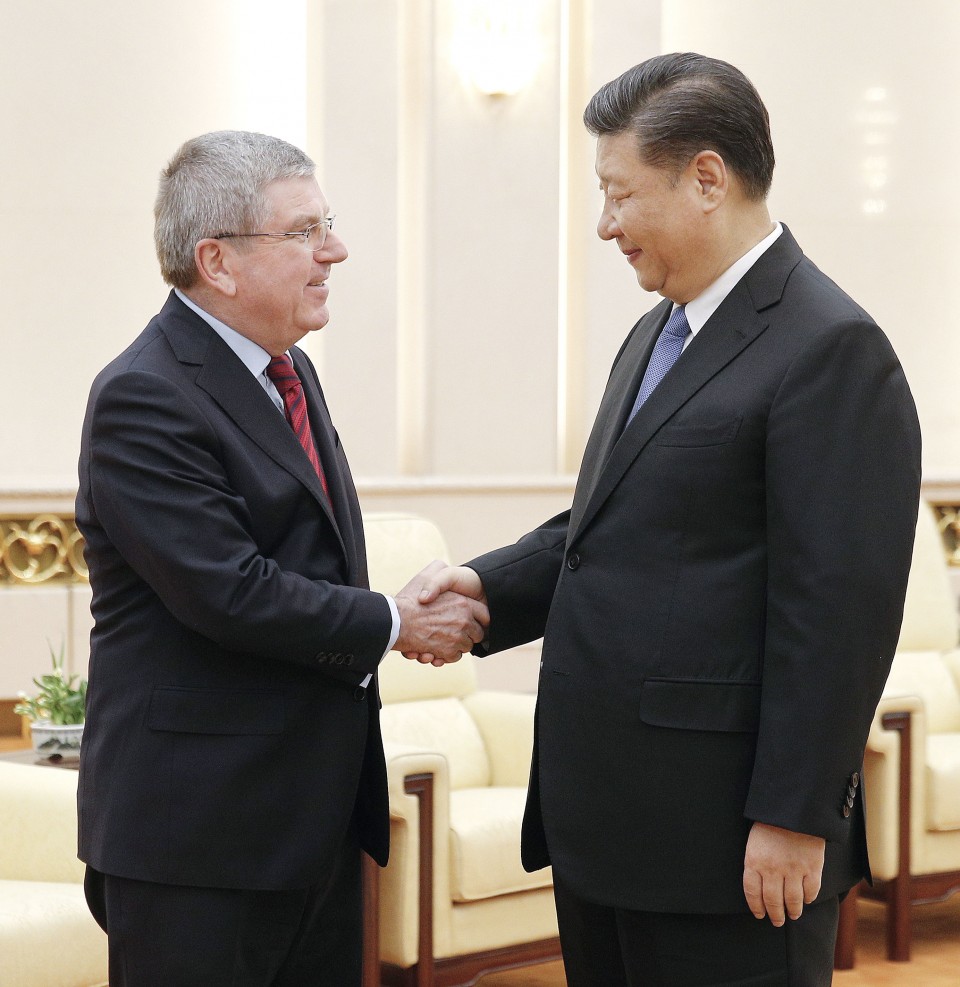 International Olympic Committee President Thomas Bach (L) and Chinese President Xi Jinping shake hands before their talks at the Great Hall of the People in Beijing on Jan. 31, 2019. (Kyodo) ==Kyodo

Xi's remarks came as calls are mounting both at home and abroad for the Tokyo Games to be postponed or canceled amid the virus spread, while China has been facing Olympic boycotts by democratic nations condemning its alleged human rights violations.

In April, Japanese government sources said Foreign Minister Toshimitsu Motegi backpedaled on a previous pledge to cooperate in making the Beijing Olympics a success during a telephone call with his Chinese counterpart Wang Yi in the same month.

The change in stance indicated that Japan, a close U.S. ally, has started to fall into step with the administration of President Joe Biden, which has ramped up criticism of China's alleged human rights abuses in its far-western Xinjiang region.

Xi, however, may be trying to prevent relations between China and its neighbor Japan from souring further by expressing support for the Tokyo Games, as Sino-U.S. tensions have been escalating over several economic and security matters, pundits say.

The Chinese Communist-led government has been accused of mass detention of the country's Muslim Uyghur minority who oppose growing state surveillance under a "re-education" campaign in Xinjiang.

China has consistently said its detention camps are vocational training centers established to combat terrorism and religious extremism preemptively, urging the United States not to interfere in its "internal affairs."

In Japan, meanwhile, Prime Minister Yoshihide Suga on Friday extended a state of emergency covering the capital past its scheduled end date on Tuesday to May 31, having deemed more time is needed to bring down COVID-19 cases.

Bach's planned visit to Japan in mid-May will be "very difficult" against backdrop of a resurgence of infections in the nation, Seiko Hashimoto, the head of the Japanese organizing body of the Summer Games, said Friday.

The Tokyo Games were already put off by one year from summer 2020 due to the coronavirus outbreak.