Japan Airlines Co. reported Friday a net loss of 286.69 billion yen ($2.6 billion) for the business year through March as the coronavirus pandemic depressed travel demand, causing the air carrier to log its first red ink since relisting in 2012 following rehabilitation.

JAL, which has been undergoing cost-cutting to ride out the COVID-19 crisis, did not disclose earnings forecasts for the current year through next March, citing uncertainty.

The carrier said it incurred a loss of 398.31 billion yen before interest and taxes as sales plunged 65.3 percent from the year before to 481.23 billion yen in the year through March 31.

JAL President Yuji Akasaka said the situation remains "severe" and the outlook for a recovery in travel demand remains uncertain. 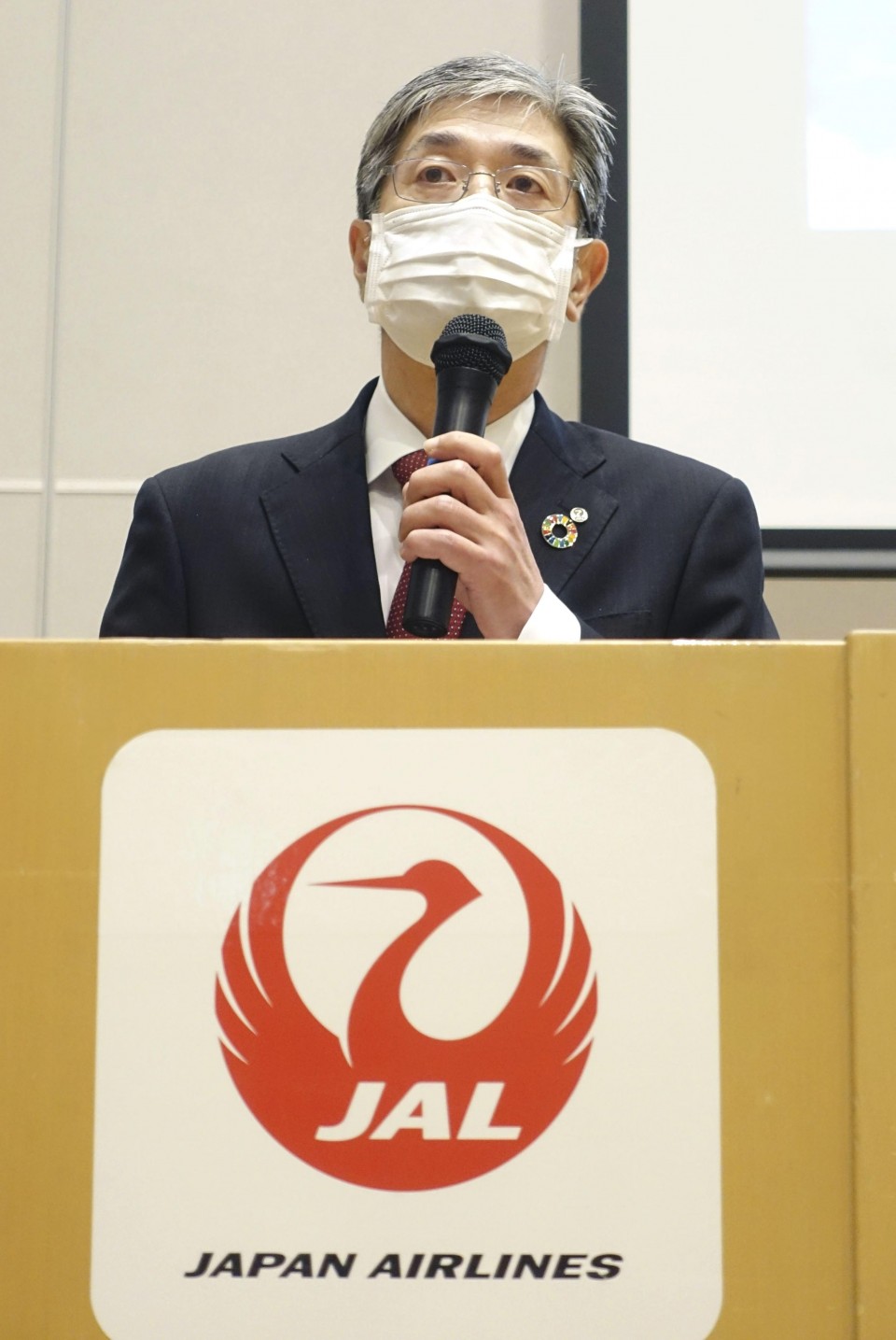 Japan Airlines Co. President Yuji Akasaka speaks at a press conference in Tokyo on May 7, 2021. The airline reported a net loss of 286.69 billion yen ($2.6 billion) for the business year through March as the coronavirus pandemic depressed travel demand. (Kyodo) ==Kyodo

"Air travel demand depends on when the effects of vaccinations will start appearing," Akasaka told a press briefing. "Looking at the situation in the United States and Britain, demand has certainly returned as vaccinations have progressed. So we need to prepare for a sharp recovery...but what we do not know is when that will happen."

JAL is not alone in struggling to stay afloat as the pandemic has limited people's movements and economic activity. Last week, its domestic rival ANA Holdings Inc., the parent of All Nippon Airways Co., reported a record net loss of 404.62 billion yen for fiscal 2020.

With its vaccination rollout much slower than in the United States and some European nations, Japan is struggling to curb coronavirus infections and a third state of emergency for populous areas like Tokyo and Osaka was extended.

In the just-ended business year, the number of passengers on domestic flights came to 12.21 million, down 66.5 percent from a year ago, while those on international flights tumbled 96.0 percent to 357,519 due to COVID-19 travel restrictions.

Revenue from international flights took a much larger hit than that from domestic ones, marking a 94.3 percent year-on-year drop to 27.9 billion yen. Domestic service revenue came to 174.0 billion yen, down 67.2 percent.

The cargo segment, however, saw robust demand, with a 40.6 percent jump in revenue to 128.8 billion yen.

The dwindling air travel demand led to the airline's first red ink since recovering from its bankruptcy a decade ago and returning to the First Section of the Tokyo Stock Exchange in 2012.

Looking to a post-pandemic recovery in travel, JAL said it will shift more resources to low-cost carrier businesses as a medium-term business plan until fiscal 2025 was also unveiled Friday.

The Japanese airline will make Spring Airlines Japan Co., a unit of China's major LCC Spring Airlines Co., a consolidated subsidiary in June, according to the new medium-term plan.

Akasaka said JAL expects to "fully recover" from the impact of the pandemic in fiscal 2023 when it hopes to see a profit of 170 billion yen in earnings before interest and tax, or EBIT, with 10 billion coming from the LCC business.

The company will raise the capital adequacy ratio, a measure of fiscal health, to 50 percent by fiscal 2023 after it fell to 45.0 percent in fiscal 2020.

Travel demand is expected to see a rebound globally but at a moderate pace this year, supported by vaccination rollouts. The International Air Transport Association forecasts air travel this year will return to 43 percent of pre-pandemic 2019 levels and the number of passengers to roughly half of the 4.5 billion.