Japan's top court on Monday ruled in favor of around 500 plaintiffs in four suits seeking damages from the state over diseases contracted by construction workers following exposure to asbestos.

In the first unified judgment handed down by the Supreme Court over the suits, the ruling said the government was negligent in its duty to protect workers from contracting lung cancer and other diseases linked to asbestos. 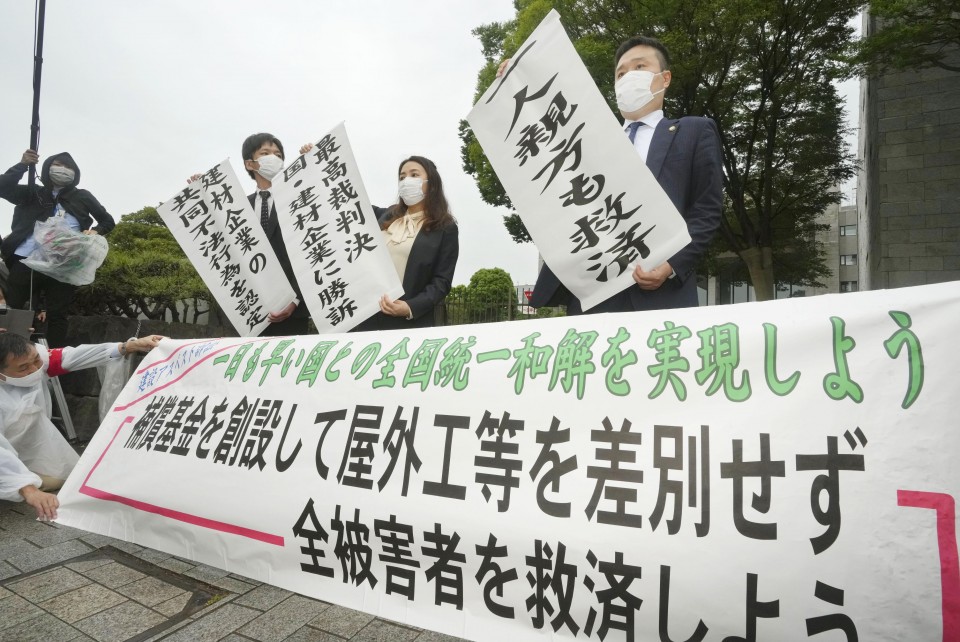 Lawyers hold up banners showing victory in an asbestos health damage case in front of the Supreme Court in Tokyo on May 17, 2021. (Kyodo)

It said manufacturers of construction materials containing asbestos were also responsible to some extent, in its ruling on the four lawsuits filed with district courts in Tokyo, Yokohama, Osaka and Kyoto.

Prime Minister Yoshihide Suga, who will meet with the plaintiffs on Tuesday, is planning to offer them an apology, a ruling party source said.

As a way to support the victims, the ruling coalition of the Liberal Democratic Party and Komeito decided to propose that the government pay compensation of up to 13 million yen ($119,000) to each victim exposed to asbestos.

Toshitaka Onodera, a lawyer for the plaintiffs, told reporters it will accept the compensation proposal.

In the ruling, Presiding Judge Takuya Miyama said the state should have warned of the dangers of asbestos by October 1975 through labels on construction materials or at construction sites, and should have instructed workers to wear dust-protective masks.

"It significantly lacks rationality" that the state did not exercise its authority to regulate the use of asbestos, Miyama said.

The substance, a naturally occurring fibrous mineral, was widely used for insulation, fire protection and sound absorption, in buildings.

Since 2008, a number of damages suits, including the four on Monday, have been filed nationwide related to asbestos exposure at construction sites, with a total of 1,200 plaintiffs as of April this year, according to the lawyers involved. The plaintiffs include bereaved family members of workers exposed to asbestos.

"I feel responsibility and offer my deep apologies," said Yoshihisa Tamura, minister of health, labor and welfare, in a statement.

The four suits were examined by the top court after high court rulings differed in assigning responsibility to the state and manufacturers.

The top court had previously ordered the state and manufacturers to pay compensation to the victims but had not provided detailed reasoning for awarding damages.

The plaintiffs argued that state regulations for asbestos, which did not require workers to wear protective masks, were insufficient. They also said manufacturers failed to properly indicate the dangers of the material.

The state, meanwhile, argued it only had a responsibility to protect company employees as self-employed workers are responsible for their own health and safety.

Manufacturers denied responsibility on the grounds that it was impossible to confirm which materials were responsible for the diseases contracted.

The use of the substance was gradually regulated as it was found that inhaling asbestos fibers could cause lung cancer and other diseases. Due to the decades-long latency period, it was referred to as a "silent time bomb."

A law to provide financial support to people suffering from asbestos-linked diseases took effect in Japan in 2006.