80% supportive of reigning empress amid shrinking pool of heirs: poll

About 80 percent of respondents in a recent Kyodo News poll said they would accept both a reigning empress and an emperor descending from a female member of the imperial family amid a shrinking number of heirs.

The results of the mail survey conducted in March and April were broadly in line with the outcome of the previous Kyodo poll on the issue conducted last year, indicating an overwhelming majority of people support changes to the rule limiting imperial succession to men from the paternal line.

The latest survey conducted ahead of the nation's Constitution Memorial Day on Monday also showed 67 percent were opposed to the idea of reinstating male patrilineal descendants of the now-abolished collateral branches of the imperial family who abandoned their status in 1947.

How to ensure a stable succession to the Chrysanthemum Throne has become an urgent task since former Emperor Akihito, 87, relinquished the throne in 2019 -- the first emperor to do so in around 200 years -- based on a one-off law. 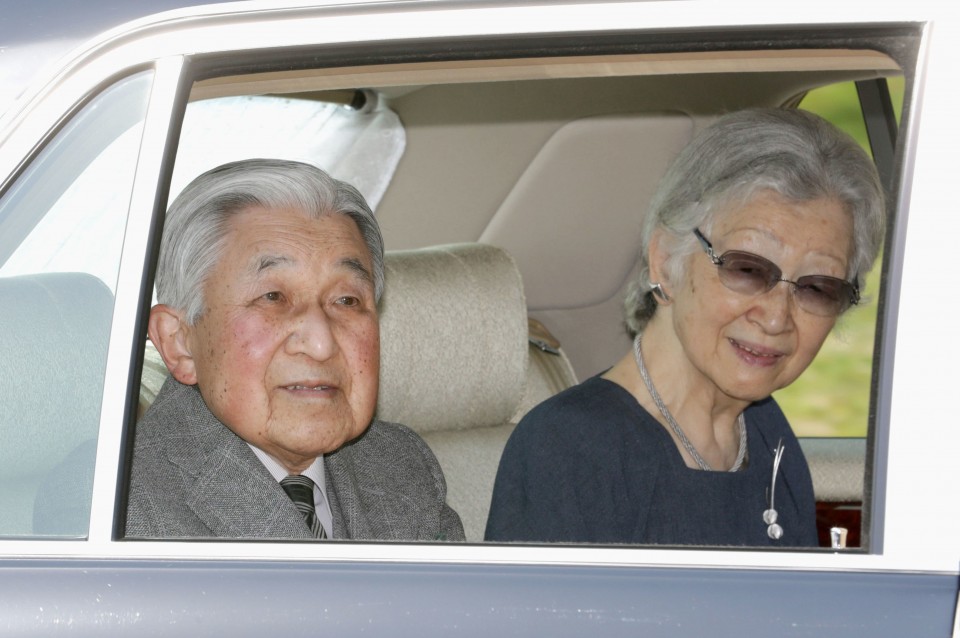 Former Japanese Emperor Akihito and former Empress Michiko move out of the Imperial Palace in Tokyo on March 19, 2020. (Kyodo)

Current Emperor Naruhito, 61, has only three heirs -- his brother Crown Prince Fumihito, 55, his nephew Prince Hisahito, 14, and his uncle Prince Hitachi, 85. The emperor and Empress Masako have one daughter, 19-year-old Princess Aiko.

The number of imperial family members has been decreasing as women are required to abandon their royal status upon marrying commoners under the 1947 Imperial House Law.

In March, the government launched formal discussions on how to ensure a stable imperial succession by establishing an advisory panel to solicit views from experts.

Despite widespread public support for a reigning empress and an emperor descending from the maternal line, opposition to the idea remains strong among conservative academics and lawmakers including members of Prime Minister Yoshihide Suga's Liberal Democratic Party.

The world's oldest monarchy has an unbroken history of patrilineal succession.

The panel has been discussing topics including the creation of a system to enable women to remain in the royal family even after their marriage to commoners and reinstating members of the 11 former collateral branches that share with the imperial family a common ancestor some 600 years ago.

It showed 52 percent of the respondents supported and 35 percent somewhat backed a reigning empress, meaning a total of 87 percent were in favor of the idea, up slightly from 85 percent in last year's survey.

Asked about an emperor descending from the maternal line, 43 percent of the respondents were in favor and 37 percent were somewhat supportive. The total of 80 percent was almost unchanged from 79 percent last year.

By age and gender, more than 90 percent of female respondents in their 30s or younger said they would accept both a reigning empress and an emperor from the maternal line, the poll showed.

Among a total of nine academics and journalists interviewed during two meetings of the advisory panel held in April, many were in support of a reigning empress, but most of them were cautious about an emperor from the maternal line.

The advisory panel will hear from a total of about 20 experts and is aiming to reach a conclusion by this fall, at which point it will present its findings to parliament.