As the international community focuses on the humanitarian crisis in India, a deadly coronavirus crisis is also unfolding in neighboring Nepal, leaving the small Himalayan nation in a battle it is ill-prepared to fight, public health experts say.

Nepal was among the first in Asia to start an inoculation drive, launching the effort in January, but it has been suspended since April as vaccines stopped coming from India, where the health system has collapsed under the burden of the pandemic.

The Indian government has temporarily banned vaccine exports to prioritize vaccinating its own population in a frantic effort to contain the rapid spread of the virus in a nation of over 1.3 billion people. 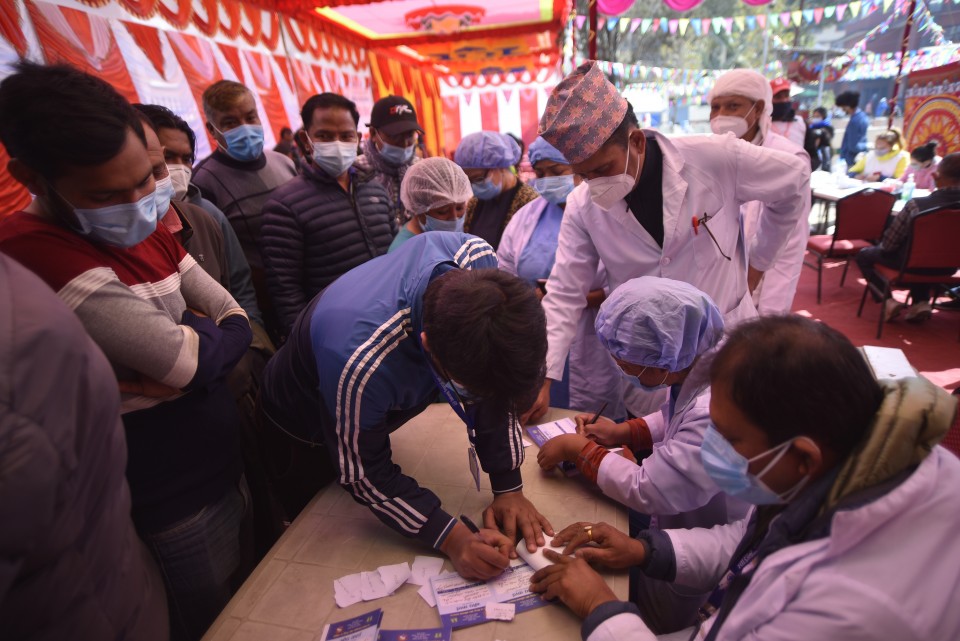 Nepal, which shares an 1,800-kilometer open border with India, saw daily new cases spike from below 500 in mid-April to over 9,000 in early May, with the COVID-19 positivity rate now close to 50 percent.

The nation had 9,070 newly confirmed virus cases on Thursday, taking the tally to 368,580, according to the Health and Population Ministry. The death toll reached 3,529, including 54 new deaths.

The new cases were confirmed out of 21,142 standard PCR and rapid antigen tests conducted on Nepalis.

Contact tracing has become logistically impossible to continue, he added.

The government has taken measures such as putting under lockdown 50 of the country's 77 districts, closing most border crossings with India and suspending domestic and international flights.

But with just 600 ventilators and 1,700 ICU beds, the nation's weak health infrastructure is already overstretched at a time when experts warn that this surge will peak in a matter of weeks to over 200,000 daily infections.

"The curve is much steeper in Nepal than in India," said Anup Subedee, an infectious diseases expert in Nepal. "The virus reproduction rate in Nepal is among the highest in the world. A replay of scenes in Italy last year is already evident here."

In the absence of beds equipped with ventilators, critical COVID-19 patients are being kept in general ward beds, even in the capital Kathmandu.

"Patients in their 30s and early 40s are dying because there is no ventilator, ICU bed and oxygen," the U.S.-trained doctor said.

In Kathmandu, which has consistently accounted for half of daily infections, the only crematorium is overburdened. Makeshift funeral pyres have been set up on the banks of a river that flows by the revered Pashupatinath temple, now closed to worshippers.

At some hospitals in regions neighboring India, infected medical personnel are having to treat COVID-19 patients.

This worrying trend will continue for weeks, Subedee predicted. "The nation immediately needs 3 million vaccine doses to protect people aged over 55 and those who have significant co-morbidities," he added.

Facing a lack of vaccines, thousands of Nepalis at home and abroad have joined an online petition asking U.S. Ambassador to Nepal Randy Berry and the State Department to immediately release at least 12 million doses of vaccines to help resume inoculation efforts.

"America's timely action will save hundreds of thousands of people from unnecessary suffering and death and reduce the long-term impacts of poverty and lost development," says the petition, which has garnered more than 19,000 signatures since its launch Thursday. 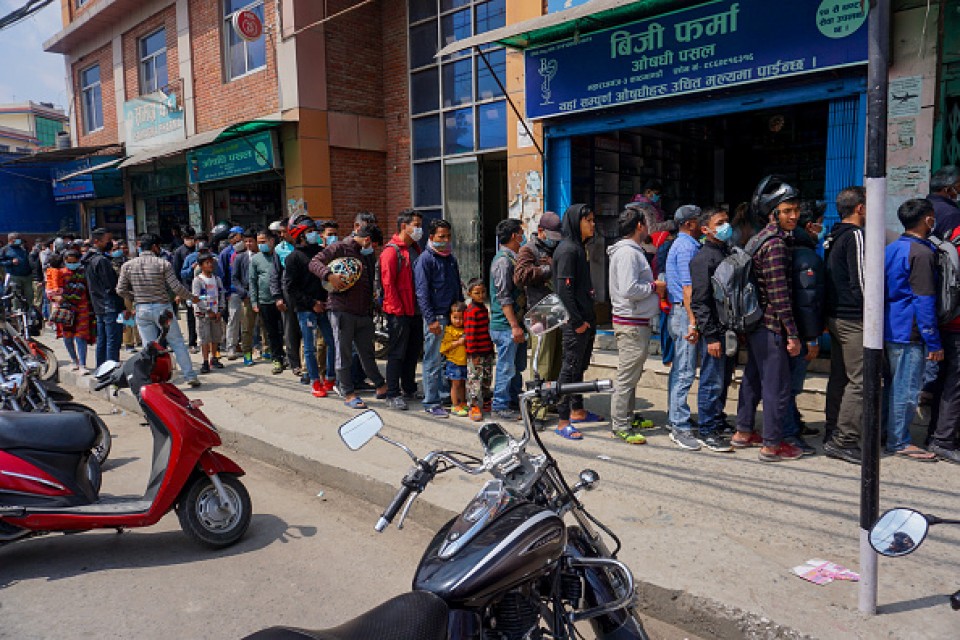 People queue outside a medical store to buy face masks amid concerns about the spread of coronavirus in Kathmandu, Nepal, on March 20, 2020. (NurPhoto/Getty/Kyodo)

Nepal began its inoculation drive thanks to a million doses of the vaccine known as Covishield that it received as a gift from India. Originally developed by major British drugmaker AstraZeneca Plc and the University of Oxford, the vaccine is produced by Serum Institute of India, a major Indian vaccine maker.

Buoyed by the gesture, which was followed by China's decision to gift Nepal 800,000 doses of Chinese-made vaccine, Prime Minister Khadga Prasad Sharma Oli announced ambitious plans in January to inoculate the population of 29 million by the end of April.

However, the plans faltered. So far, just 370,000 Nepalis have received both vaccine doses, while 2.1 million have received a single dose.

Nepal has paid Serum for an additional 2 million doses of Covishield, but half of this amount is yet to arrive. Plans to buy an additional 5 million Covishield doses from the Indian company stalled after India temporarily banned vaccine exports last month.

Under intense criticism for taking the pandemic lightly and for losing precious time to prepare for the second wave that has now overwhelmed Nepal's health system, Oli appealed for help earlier this week.

"We are of the view that vaccines and critical care medicines are global goods and everyone should have access to them," he said in a televised address on Monday. "I would like to request our neighbors, friendly countries and international organizations to help us with vaccines, diagnostic equipment and kits, oxygen therapy, critical care medicines."

Nepal is in talks with China, Russia and the U.N.-backed COVAX Facility to procure vaccines. Because of poor infrastructure for storing and delivering vaccines to vaccination centers, the Himalayan nation can only use Covishield, India's indigenously manufactured Covaxin, Chinese vaccines and Russia's Sputnik V, none of which need the subzero storage temperatures that some of the other vaccines require.

The United States announced last month that it would share 60 million doses of Oxford-Astrazeneca vaccines with other countries as part of its vaccine diplomacy. As of now, there is no mention of Nepal in the list of prospective recipients of the doses.

"Our two nations have shared a long history of mutual cooperation, exchange and support. By ensuring timely delivery of vaccines for Nepal you will be adding an important chapter to that history," the petition to the U.S. ambassador says.