Yusei Kikuchi turned in one of his most dominant performances of the season for the Seattle Mariners on Sunday, carrying a no-hitter into the sixth inning of a 4-2 victory over the Texas Rangers.

The Japanese lefty earned his third win of the year after striking out five over 6-2/3 innings, while allowing two runs on three hits and a walk at Seattle's T-Mobile Park. 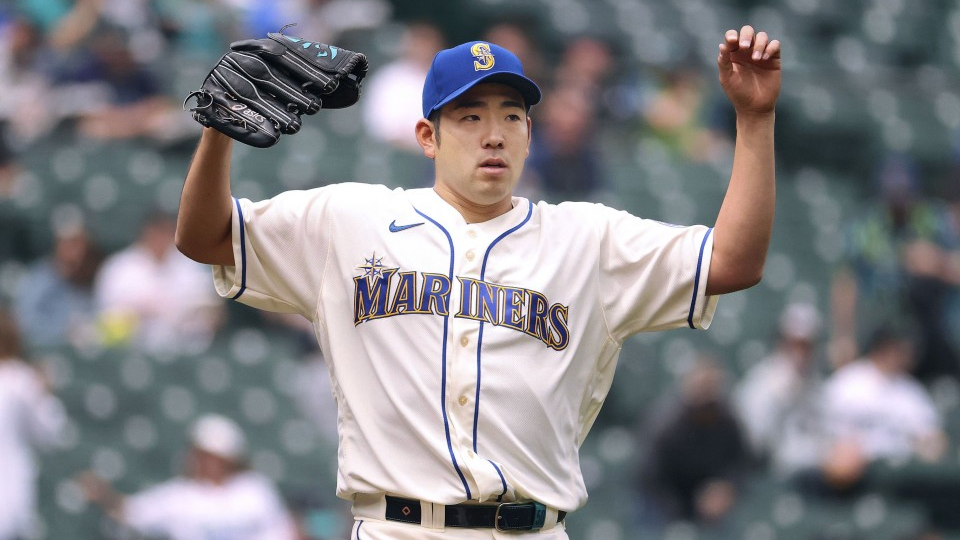 Yusei Kikuchi of the Seattle Mariners reacts during the third inning against the Texas Rangers at T-Mobile Park on May 30, 2021, in Seattle. (Getty/Kyodo)

His attempt at the Mariners' first no-hitter since James Paxton in 2018 was broken up when Willie Calhoun grounded a single to lead off the sixth.

Kikuchi (3-3) exited in the seventh, when he earned two outs but gave up a two-run homer to Joey Gallo.

The 29-year-old former Seibu Lions ace said he had been aware of the no-hitter around the fifth inning, but tried not to let it affect his approach.

"I knew about it, but it's not an easy thing to do," said Kikuchi, who threw first-pitch strikes to 18 of his 24 batters.

"I just focused on getting out each batter in front of me. I felt a lot of confidence throwing every pitch."

Kikuchi benefited from early run support, with Ty France delivering an RBI double against Texas starter Yang Hyeon Jong (0-3) in the first inning. France drove in two more runs in the third in a 2-for-4 outing.

With their pitching depleted by injury and coronavirus safety protocols, Seattle have leaned heavily on Kikuchi, who has pitched at least six frames in nine of his 10 starts.

Lauding the southpaw's performance on Sunday, Seattle manager Scott Servais said he was capable of carrying the responsibility.

"He's got plenty of gas in the tank. This guy throws and prepares more than anybody else that we have," Servais told MLB.com.