China has celebrated Chinese-born filmmaker Chloe Zhao's becoming the first nonwhite, female best director Oscar winner, but her historic success may be an irritant to the Communist Party accused by the Western countries of violating human rights and stifling democracy.

On Sunday, the road movie "Nomadland" won best picture at the 93rd Academy Awards in Los Angeles and Zhao became the first Asian woman to scoop the best director prize, at a time when tensions between China and its rivals such as the United States have been escalating. 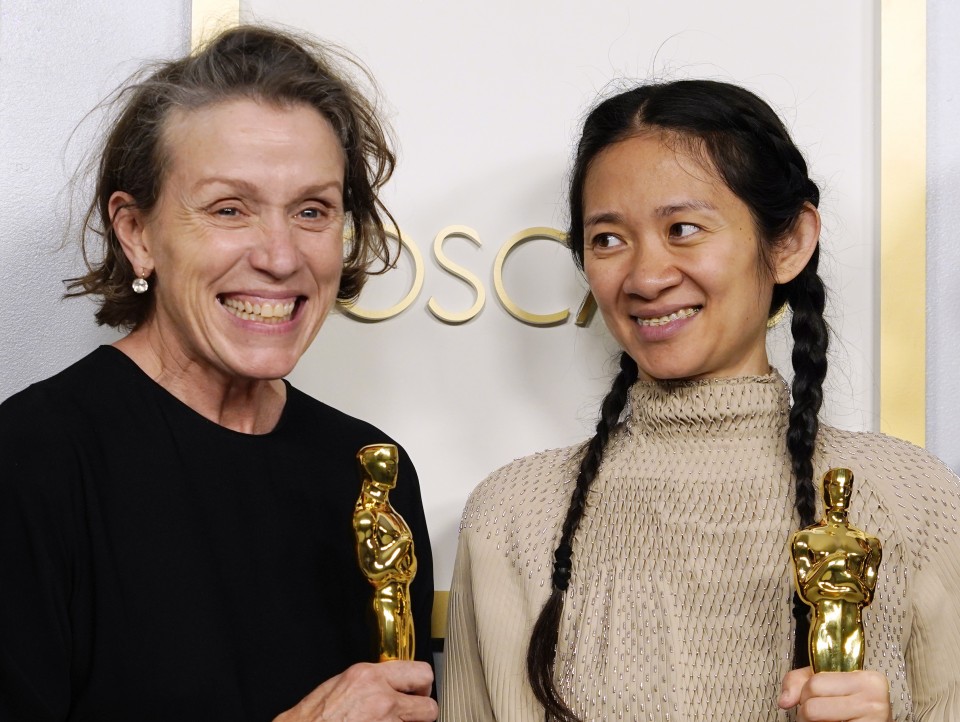 Chloe Zhao (R) and Frances McDormand, winners of the award for best picture for "Nomadland," pose in the press room at the Oscars on April 25, 2021, in Los Angeles. (Pool/Getty/Kyodo)

Although overseas media have reported the leadership of President Xi Jinping considers Zhao's Oscars win to be an awkward situation, the Communist Party has praised her achievement in its mouthpiece, saying she has been well influenced by Chinese culture.

The main issue in question for China is not Zhao's receiving the award but an apparent attempt by the Academy of Motion Picture Arts and Sciences to use her as a "political symbol" to correct its public image as a predominantly male, overwhelmingly white institution, some foreign affairs experts say.

China has felt "uncomfortable" with the Oscars, as it believes Zhao's victory would not only benefit the award organizer but make more democratic nations cast their stern eyes on the Communist Party's political behavior, a diplomatic source in Beijing said.

The Global Times, a tabloid affiliated with the ruling party, on Monday quoted Xiao Fuqiu, a film critic based in Shanghai, as saying Zhao's win of the Oscars and other international film awards "show her talent is great and should be praised."

"She definitely should be recorded by history, and she has set a good example to encourage many Chinese filmmakers to continue their art dreams," Xiao was quoted as telling the newspaper.

Noting that Zhao in her acceptance speech touched on classic Chinese philosophical ethos, Xiao said she showed "the positive influence of Chinese culture" and she would "win more support among Chinese moviegoers."

The Global Times, however, lambasted the Oscars for trying to regain the hearts of moviegoers around the world by playing the "politically correct" and "diversity" cards in reaction to previous hashtags, "OscarsSoWhite" and "OscarsSoMale."

Shi Wenxue, a film critic based in Beijing, was quoted by the newspaper as saying, "Chloe Zhao's best director win has many aspects, with the biggest highlighting the Oscars' 'political correctness.' She is the first nonwhite women to win the prize."

Foreign media, meanwhile, have reported that Beijing has been keen to block out information about Zhao's Oscars victory, as she in the past made controversial remarks against the Chinese government.

In an interview with a film magazine in 2013, Zhao said her home country was a "place where there are lies everywhere." She came under fire in China after the comments were spread online following her win at the Golden Globes in February.

Social media posts about Zhao and "Nomadland" have reportedly been deleted by Chinese authorities from Weibo, China's equivalent of Twitter.

Asked Monday whether the government has been imposing restrictions on reports about Zhao's Oscars win, Chinese Foreign Ministry spokesman Wang Wenbin was unforthcoming to reporters, saying only, "This is not a diplomatic issue."

China has been at odds with the United States as well as its security allies including Japan over its alleged human rights abuses in the far western Xinjiang region, the crackdown on freedoms in Hong Kong, and security challenges posed to Taiwan and its vicinity.

Stephen Nagy, a senior associate professor at International Christian University in Tokyo, said that Zhao's Oscars win has presented a "potential loss of face for the Communist Party during its 100th anniversary celebrations."

Hollywood actors have recently had a "reputation for championing causes that step on Beijing's redlines," he said.

"The ignoring Ms. Zhao's tremendous achievement follows a track record of silencing accolades from the international community when they go against the political and historical narratives promoted by the Chinese government such as the Nobel Prize for Chinese author Liu Xiaobo in 2010," Nagy said.

Liu, an outspoken critic of the Communist Party, died in 2017 of liver cancer while serving an 11-year prison sentence for his involvement in drafting a manifesto calling for an end to one-party rule in China and for peaceful democratic reform.

The high-profile democracy campaigner was not able to attend the peace prize award ceremony in Oslo, Norway, as he was detained in prison.

Zhao was born in Beijing in 1982 and she moved to Britain in her teenage years. After receiving a bachelor's degree in politics at Mount Holyoke College in Massachusetts, she studied film production at New York University Tisch School of the Arts.

In the wake of Zhao's contentious remarks against the Communist Party, the release of "Nomadland," which tells the story of van-dwelling nomads in the United States, has been effectively banned in China.

Shi was quoted by the Global Times as saying that since Nomadland heavily features the director's personal style and focuses on social issues in the United States, it may fail to capture the interest of Chinese moviegoers.