FEATURE: Travel-hungry South Koreans board "scenic flights" to whisk them over Japan

When Jun Jae O, a pilot for South Korea's low-cost carrier Air Seoul, announced that his plane was entering the skies above Japan's Tottori Prefecture on the Sea of Japan coast one recent Sunday morning, the cabin began to stir to life.

While passengers positioned their cellphones to take photos of the land opening up below them, the 44-year-old pilot added that local officials were also welcoming them from ground level -- social distancing taken to an extreme. 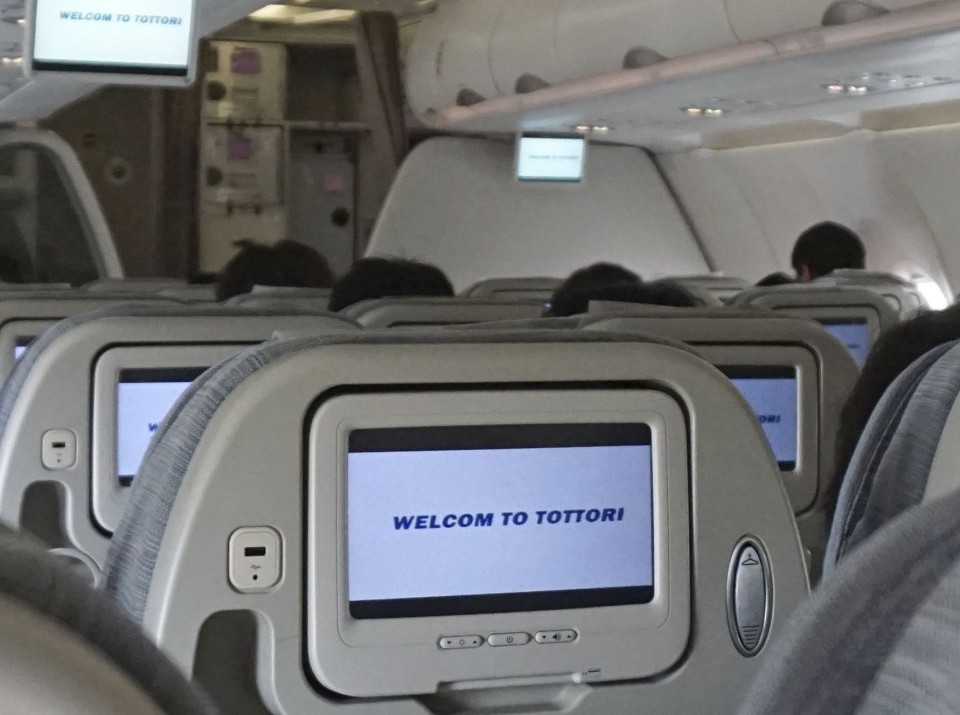 A message on the monitor welcomes passengers to Tottori Prefecture on Air Seoul's nonstop scenic flight over Japan in March 2021. (Kyodo)

"Today's flight will be a short one, but I really hope that once the coronavirus pandemic is over, you and your family and friends can enjoy traveling to Tottori Prefecture," he said.

South Koreans, like people around the world, have had to put their overseas travel plans on hold due to COVID-19 restrictions. But special flights that whisk passengers over Japan for an hour or so before landing them back in South Korea have become a big hit since their launch last fall.

Permission for the scenic flights was given in November by the country's Ministry of Land, Infrastructure, and Transport to help boost the airline industry, which has been hammered by the health crisis. Tickets cost 103,000 won (about 10,000 yen), including tax.

Besides Air Seoul, South Korea's second-biggest carrier Asiana Airlines and Jeju Air, another local low-cost carrier, have sent flights to the skies over Miyazaki and Fukuoka prefectures, respectively, since December. Nonstop flights of Air Busan have been flying over Nagasaki Prefecture, also on Japan's southern island of Kyushu, since around mid-April.

The planes depart from Incheon International Airport near Seoul, circle Japan's skies, and return to Incheon on trips that last about two and a half hours.

The flights are a welcome reprieve for the passengers, many of whom have been following the country's stringent social distancing measures since the pandemic began.

All passengers must wear masks while aboard, have a vacant seat next to them, and there is no food and beverage service for the flight duration. Those who have made overseas visits within the past 14 days are not allowed on the plane, Air Seoul said.

"I feel as if I am actually traveling though I'll be coming back (home) some hours later," said Park Sun Young, who decided to use Air Seoul's nonstop service to celebrate her 37th birthday.

"I used to visit Japan quite often, but now I can't. I was looking for something I could do for my birthday on the web and found out about this from a blog," an ecstatic Park said before boarding the flight.

Japan has long been a country frequented by South Korean travelers, in large part due to its proximity.

Woo Jong Ha, 35, was one of them. He used to visit Japan over 10 times a year as he is fond of Japanese culture and cuisine. He feels sorry he is not able to travel there freely nowadays.

"I hope I can visit again as soon as the coronavirus pandemic settles down and the relationship between the two countries gets better," said Woo as he stood at the gate to board.

Park and Woo and many other passengers also pointed to enjoying the duty-free shopping offered by international flights as one of the reasons for choosing the nonstop plane service.

After flying over Tottori, Jun's flight also cruised above Kagawa Prefecture, on Shikoku Island, before making the return to Incheon. He did not forget to encourage his passengers to visit Kagawa, saying that it is famous for its udon noodles.

"Our passengers actually do enjoy hearing about what's must-see and must-eat in each Japanese prefecture," Jun said before deboarding the plane upon their return.

"Though we cannot actually make a landing there, the feeling of getting on a plane, that very feeling of hope that this pandemic will end soon is offering happiness to them," Jun added.