Basketball: Rui Hachimura returns from injury in loss for Wizards

Rui Hachimura returned for the Washington Wizards on Monday after missing four games with a sore left knee, contributing 13 points and six rebounds in a 146-143 overtime loss to the San Antonio Spurs.

The second-year forward played 32 minutes at Washington's Capital One Arena as head coach Scott Brooks reinserted him into the starting lineup. 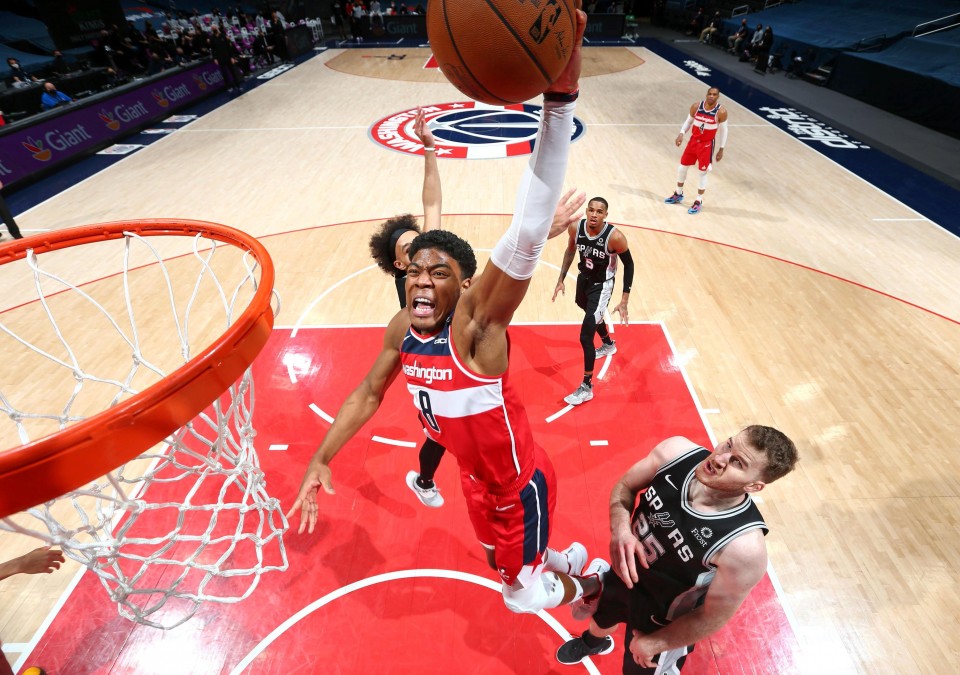 Rui Hachimura #8 of the Washington Wizards dunks the ball during the game against the San Antonio Spurs on April 26, 2021, at Capital One Arena in Washington. (NBAE/Getty/Kyodo)

The loss snapped an eight-game winning streak for the Wizards, who sit 10th in the NBA's Eastern Conference with a 27-34 record as they battle for a place in the playoff play-in tournament.

"The team had been winning while I was out, so I wanted to make sure I gave a really strong effort," said Hachimura, who knocked down a clutch three-pointer as the two sides traded baskets over the final minutes of regulation.

"The knee held up well, so I was able to play a little longer than expected. I want to get some treatment and be ready for the next game."

Bradley Beal led all scorers with 45 points for Washington, while DeMar DeRozan had 37 points and 10 assists for the Spurs.

At Tampa's Amalie Arena, Yuta Watanabe scored nine points and grabbed a pair of rebounds in 20 minutes off the bench for the Toronto Raptors, who beat the Cleveland Cavaliers 112-96.

The 12th-place Raptors improved to 26-35 to continue their bid for an Eastern Conference play-in berth.