The summit between U.S. President Joe Biden and Japanese Prime Minister Yoshihide Suga on Friday was a testament that the Asian ally is at the front-and-center of the U.S. strategy to counter China's assertiveness in the Indo-Pacific region.

But what awaits the decades-old alliance is the actual work to upgrade itself to meet the rising threats and challenges posed by Beijing, which may require further coordination in areas ranging from Taiwan and human rights to trade. 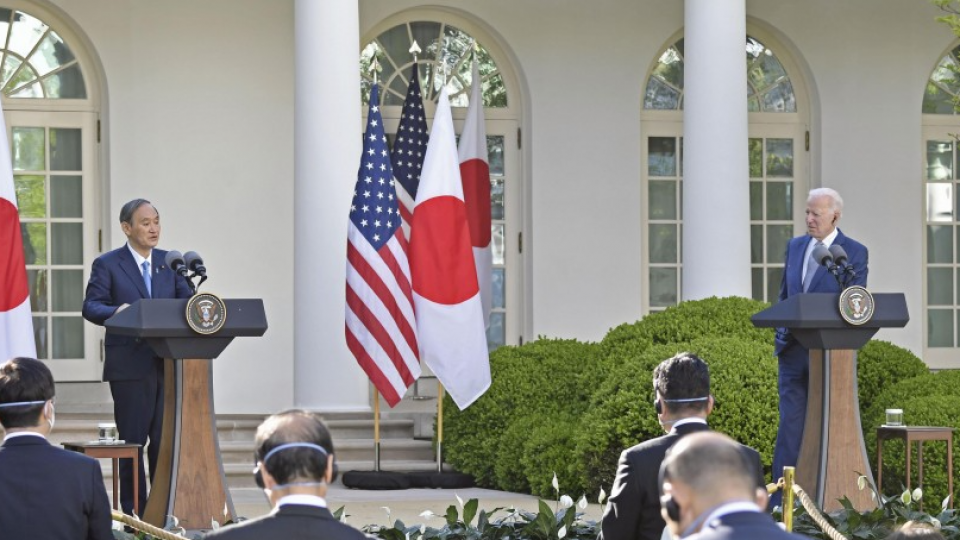 Under the Biden presidency, Japan has frequently been in the spotlight, having become the first destination of overseas trips by the U.S. secretaries of state and defense, joining the first-ever summit of the Quad grouping also involving Australia and India, and Suga becoming the first foreign leader to visit the White House.

"Part of the strategy (in the Indo-Pacific) of course is focusing really intensively on working with allies and friends and partners, and at the center of that strategy is Japan," Kurt Campbell, White House coordinator for the Indo-Pacific, said at a recent online event.

Some foreign policy experts in the United States believe Tokyo is moving in sync with the Biden administration's tough stance on China amid growing concerns over Beijing's assertiveness around the Japanese-administered Senkaku Islands in the East China Sea, toward Taiwan, its crackdown on Hong Kong and its human rights abuses.

"While a lot of states are trying to balance their economic relations with China versus their security relations, Japan doesn't really seem to fall into that," said Jeffrey Hornung, a political scientist at the Rand Corporation, a U.S. research organization.

"Japan has huge economic ties with China...but...is very willing to take China to task on things and so that's where I think Biden sees a like-minded partner, a treaty ally very capable," he said.

One notable development was that the post-summit joint statement touched on the importance of the peace and stability across the Taiwan Strait.

Although a similar phrase was included in a press statement issued after bilateral security talks involving the foreign and defense chiefs from Japan and the United States in March, it was the first time in decades that Taiwan was mentioned at the leaders' joint statement.

Hornung said getting the alliance to publicly discuss the Taiwan issue is a "significant development," given that Japan has typically shied away from doing so even as Washington has always viewed Tokyo as a relevant party in a Taiwan contingency.

The U.S. military has recently been stepping up its warning over possible China aggression toward Taiwan, with Adm. John Aquilino, nominated to lead the U.S. Indo-Pacific Command, saying in March that the threat is "much closer to us than most think."

In the same month, Adm. Philip Davidson, outgoing commander of the Indo-Pacific Command, touched on the possibility of such a move occurring within the next six years.

Beijing regards Taiwan as a renegade province awaiting reunification, by force if necessary. It is a potential military flashpoint that could draw the United States into conflict with China due to its security assurances to the island democracy.

In the case of a Taiwan contingency, Japan, which has restrictions in its use of force under the war-renouncing Constitution, would likely be called upon to provide logistical and other support to the U.S. military.

As part of the preparation, the Japanese government will have to seek deeper public understanding on the issue, taking into account the likelihood of mass casualties as Japan itself can become a target of an attack as it hosts bases which the U.S. military will rely on for executing operations, Hornung said.

With China having the ability to launch missiles to virtually anywhere in Japan, Tokyo may also have to study whether it has enough air and missile defenses and equipment to bring the personnel, ammunition and fuel where necessary to cope with such attacks, he added.

Toshihiro Nakayama, a politics professor at Japan's Keio University, said in a recent webinar that Japan should engage in serious discussions on how to play an "active role" in a Taiwan contingency.

"It's critically important for us to realize that the situation has changed and the United States is asking more in terms of Japanese contribution to the alliance," he said. "If Japan is not forthcoming in playing an active role, I think that might signal sort of a crisis moment for the alliance."

Another question Japan faces is whether it can fully align itself with the Biden administration's renewed focus on human rights promotion, particularly against China's abuses of the Muslim Uyghur minority in its far-western Xinjiang region.

Japan has recently become more vocal in its condemnation of China's human rights violations, as seen from the joint statement mentioning Suga and Biden shared "serious concerns" over the situation in the Xinjiang region.

But Japan, distancing itself from the United States and other Western countries, has been reluctant to impose sanctions over such issues, with some inside the government and businesses wary about retaliation from its largest trading partner.

On the economic front, other experts suggested that the Biden administration's still-obscure trade strategy for the Indo-Pacific region may complicate efforts to push back China's growing clout.

The Biden administration has maintained that its initial focus will be on investment in American competitiveness at home rather than negotiating any new trade deals, upholding what it calls "a foreign policy for the middle class."

"Without TPP, the United States doesn't have a lot of options for how to more deeply engage (with the region)," Zack Cooper, an expert on U.S. strategy in Asia, said.

While Biden and Suga came up with agreements to boost cooperation in areas including regional security to technology on Friday, the research fellow at the American Enterprise Institute said the hardest part will be to take the "general agreement" on a whole range of issues and turn that into an effort to build coalitions on specific issues to meet the challenges ahead.