Prime Minister Yoshihide Suga sent a ritual offering Wednesday to Yasukuni shrine in Tokyo, which is seen by China and South Korea as a symbol of Japan's past militarism.

The "masakaki" tree offering was made to celebrate the shrine's biannual festival held in the spring and autumn. The Shinto shrine honors convicted war criminals along with more than 2.4 million war dead.

Japan's top government spokesman, Chief Cabinet Secretary Katsunobu Kato, said the government is not in a position to comment on Suga's act as a private person, but added, "Whether to visit the Yasukuni shrine or not is up to the prime minister to properly decide." 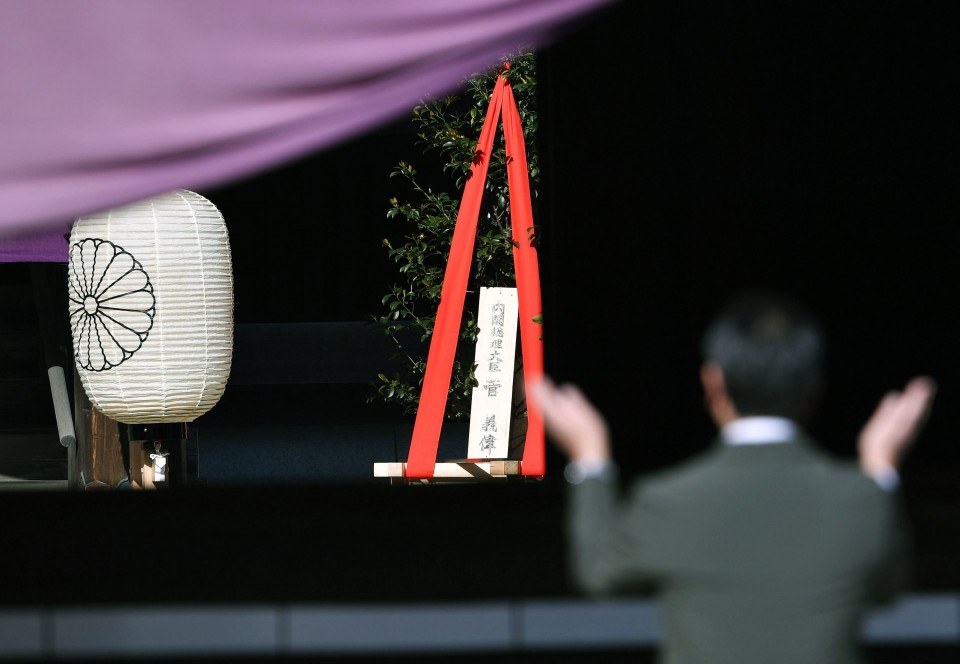 A "masakaki" tree offering made by Prime Minister Yoshihide Suga to Yasukuni Shrine in Tokyo is pictured on April 21, 2021. (Kyodo)

Suga does not plan to visit the shrine during the two-day spring festival through Thursday, according to people close to him. He took the same approach -- sending a ritual offering under his name as prime minister without visiting the site -- for the autumn event last October.

The premier did not make such an offering while he served as chief Cabinet secretary under his predecessor Shinzo Abe, but followed the practice of the former prime minister after succeeding him in September.

Abe did visit the shrine on Wednesday and told reporters, "I paid a visit to show my sincere respect to the spirits of those who fought and devoted their lives to the country."

The former premier went to the shrine in September, shortly after stepping down from his post, and in the following month as well. 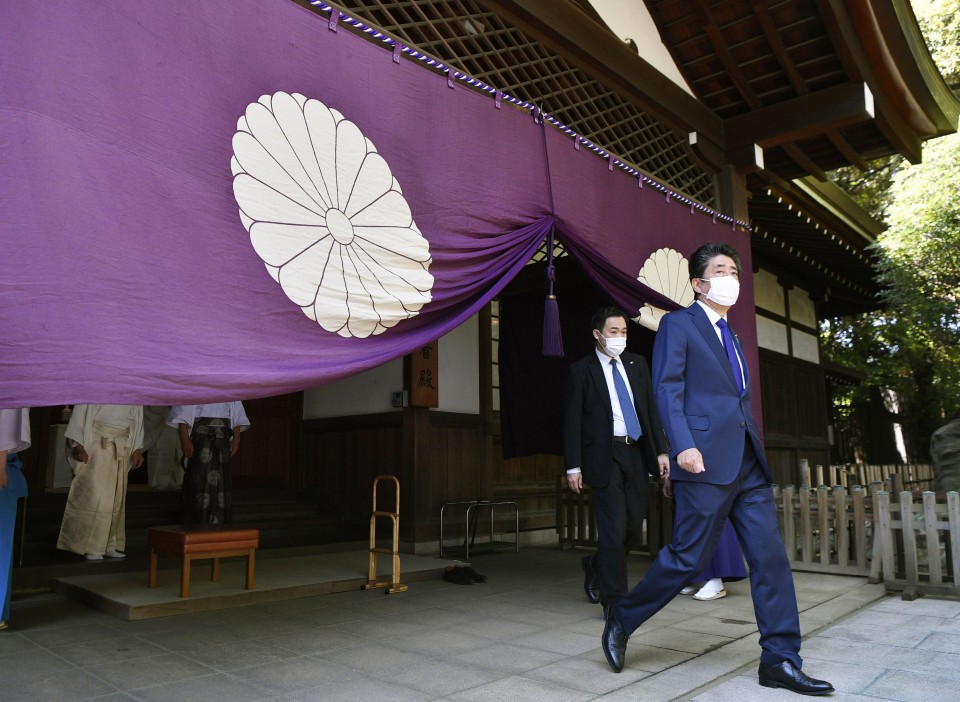 Former Japanese Prime Minister Shinzo Abe is pictured at Yasukuni shrine in Tokyo on April 21, 2021, during a spring festival. The Shinto shrine is seen by China and South Korea as a symbol of Japan's past militarism as it honors convicted war criminals along with more than 2.4 million war dead. (Kyodo) ==Kyodo

"The government urges Japanese leaders to squarely face history and show their humble introspection and sincere reflection through action, and to keep in mind that these are the foundation for developing future-oriented South Korea-Japan relations," Choi Young Sam said.

China, meanwhile, expressed opposition to what it calls "wrong practices of Japanese political leaders," lambasting the Yasukuni shrine for enshrining "Class-A war criminals who were directly responsible for Japan's war of aggression."

China asks Japan to "face up to and deeply reflect on the history of aggression" and to "take concrete actions to win the trust of its Asian neighbors and the international community," Foreign Ministry spokesman Wan Wenbin told reporters in Beijing.

A group of lawmakers who advocate the importance of visiting Yasukuni had planned to visit Thursday but canceled due to a resurgence of coronavirus infections. Hidehisa Otsuji, a former vice president of the House of Councillors and current leader of the group, will go on their behalf.

During the shrine's most recent autumn festival, neither Suga nor any of his Cabinet members visited the shrine.

Past visits to the shrine by Japanese leaders and lawmakers have drawn criticism from China and South Korea, where memories of Japan's militarism run deep.