Osaka Prefecture on Wednesday reported a record 1,130 daily coronavirus cases, bringing the nationwide tally to the highest in over two months, as the country grapples with what medical experts describe as a "fourth wave" of the pandemic.

Osaka saw another record of infections after topping the 1,000 mark for the first time Tuesday, prompting Gov. Hirofumi Yoshimura to say the western Japan prefecture could ask the central government to issue a state of emergency again.

"I have a strong sense of crisis," Yoshimura told a press conference, adding a "request for large-scale business suspensions would be necessary" if effects of the current measures under the quasi-state of emergency are proven unproductive next week.

The Osaka governor said his government is considering requesting schools to switch to online lectures and suspend student club activities as part of efforts to curb the infections.

The nationwide tally topped 4,300 new cases, the highest since Jan. 23, with Hyogo Prefecture adjacent to Osaka also confirming a record 507 cases, as highly contagious variants are spreading around Osaka with Tokyo also seeing them rising.

The capital reported 591 new infections while neighboring Kanagawa Prefecture saw its daily figure surpass 200 for the first time since the end of the virus emergency for the area on March 22.

Shigeru Omi, an infectious disease expert who chairs the government's subcommittee, said in parliament Japan has entered a "fourth wave" of infections when asked about the current situation.

The government should expand areas subject to tougher anti-virus measures "in an extremely swift and nimble manner," he said.

"It is necessary to fully consider the possibility of issuing a state of emergency" in Osaka, which entails stronger anti-virus measures such as closure of eateries and heavier punishments for noncompliance compared with the quasi-emergency, Omi said in a separate parliament committee meeting.

Toshio Nakagawa, head of the Japan Medical Association, echoed Omi's view on the fourth virus wave, saying another state of emergency might be needed in Osaka and some other areas.

"A collapse of the medical care system has already begun" in the western prefecture, he said at a press conference, adding that hospitals in Tokyo and its neighboring prefectures could be put under similar strain.

The bed occupancy rate for patients with severe symptoms stood at over 90 percent, according to Osaka.

Prime Minister Yoshihide Suga, however, took a cautious stance as to whether the country has entered the new phase of infections, telling a House of Councillors plenary session, "I don't see a big wave (of infections) nationwide."

The government is considering adding some prefectures to the list of areas requiring the quasi-state of emergency that involves shorter business hours for restaurants and bars, among other anti-virus steps.

The quasi-state is already in place in six prefectures including Tokyo and Osaka. Yasutoshi Nishimura, minister in charge of the state coronavirus response, said the central government is working with the Saitama and Aichi prefectural governments to beef up anti-virus measures, saying a recent surge in highly contagious virus variant cases in the two areas is worrisome. 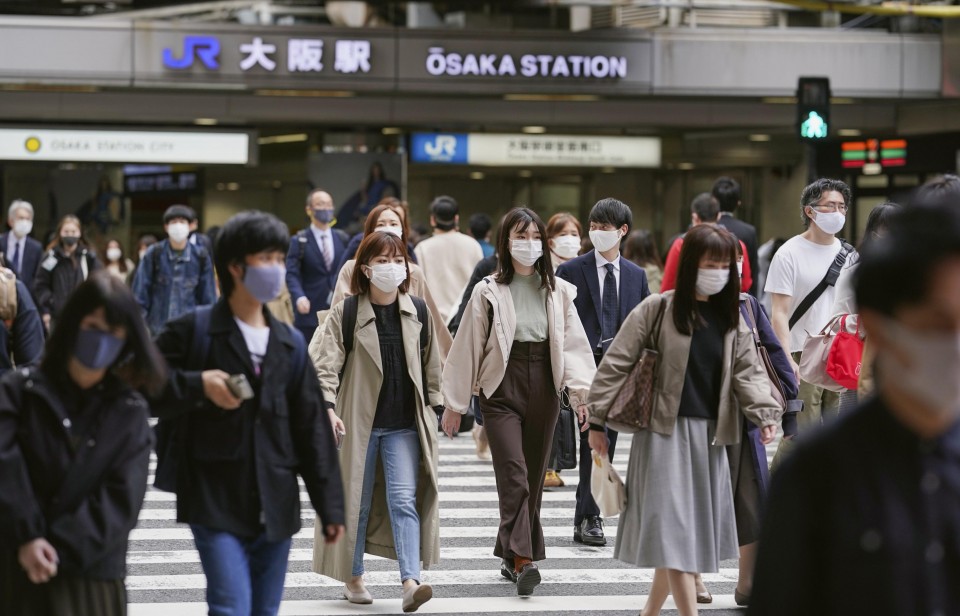