A total of about 15,000 elderly people in Japan have been vaccinated against the novel coronavirus, more than double the number released by the health ministry, a Kyodo News survey showed Sunday.

The discrepancy casts doubt on the ability of the government's new digitalized system launched last Monday as part of efforts to gather and manage individual inoculation data across the country in line with the start of the vaccination program for those aged 65 or older. 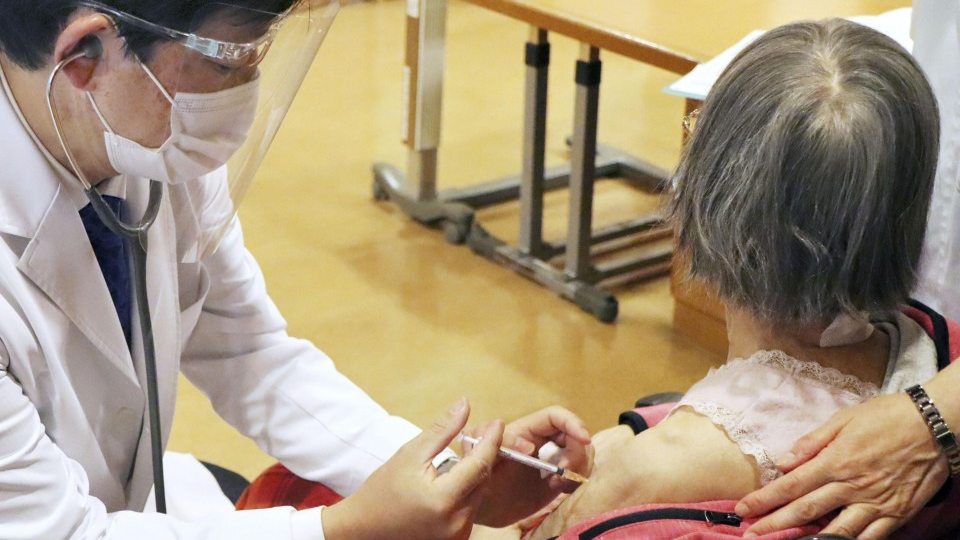 An elderly person is inoculated against the novel coronavirus at a nursing home in Kawasaki in Kanagawa Prefecture, eastern Japan, on April 12, 2021. Japan began vaccinating people aged 65 or older against COVID-19 the same day. (Kyodo) ==Kyodo

The Ministry of Health, Labor and Welfare has said a total of about 6,700 elderly people have so far received vaccine shots across Japan since the government started inoculations for about 36 million seniors last Monday.

In contrast, the Kyodo survey, conducted Friday, found that a total of 14,994 elderly people have been vaccinated nationwide.

The actual vaccination number is likely to be larger because many municipalities failed to accurately record the number of jabs they have given to elderly people.

As municipality officials do not enter the data in real time in some cases, there seems to be "a time lag" until the information is reflected on the system, an official of the Cabinet Secretariat said.

Kyodo News conducted the survey on 148 municipalities -- which received the first batch of vaccines for some 50,000 elderly people in line with an announcement by the health ministry -- and Japan's 47 prefectures.

According to the survey, 63 municipalities responded that they were not aware of the number of vaccinated people in their areas or they have not yet started inoculating eligible residents.

Japan's vaccine minister Taro Kono said Sunday that Pfizer Inc. will increase supply of its coronavirus vaccine, allowing the country to procure enough doses by the end of September to inoculate all eligible residents aged 16 or older.

Japan has been witnessing a spike of infections in what experts have called a "fourth wave," while the country's inoculation program progresses slowly compared with the United States and Europe.

In the survey, at least 19 municipalities said they had diverted vaccine shots designated for the elderly to health care workers -- the top priority target for vaccination given the high risks of infections their jobs involve -- as vaccine supplies lag behind the number of eligible workers.

Some local governments wasted doses as a result of last-minute cancelations, according to the survey.

Following the elderly, people with pre-existing conditions, such as diabetes, and those working at elderly care facilities are slated to be inoculated next, after which vaccinations will eventually be extended to the rest of the population.