Japan PM Suga says COVID vaccines to be secured for all eligible by end-Sept.

Prime Minister Yoshihide Suga said Monday that the government will secure enough COVID-19 vaccines for all eligible citizens by the end of September after an agreement with U.S. pharmaceutical giant Pfizer Inc. on additional supplies.

The agreement was reached after Suga made a request for extra supplies to be able to offer vaccinations to all residents aged 16 or older, or some 110 million people, by the end of September during telephone talks with Pfizer CEO Albert Bourla on Saturday, the last day of his three-day visit to Washington. 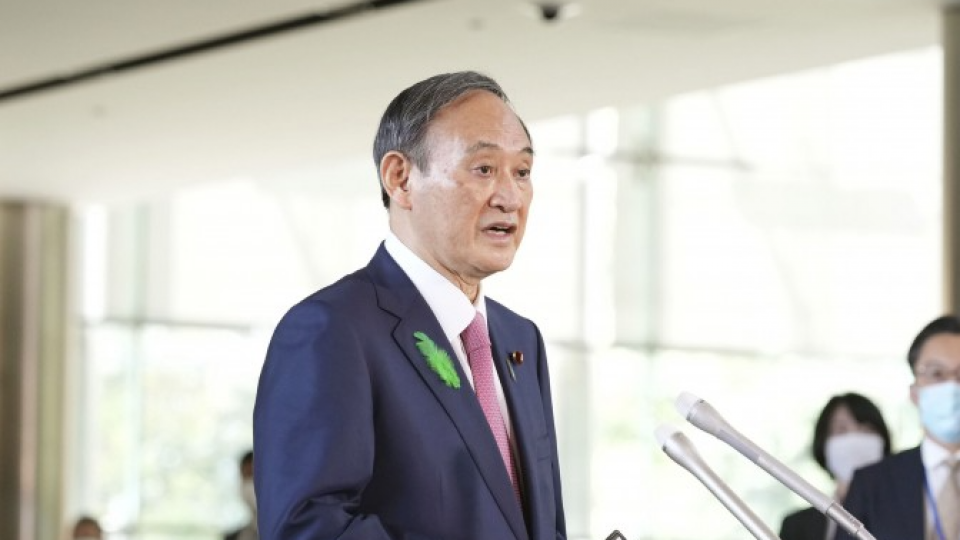 Japanese Prime Minister Yoshihide Suga meets the press at his office in Tokyo on April 19, 2021, following a recent trip to Washington for talks with U.S. President Joe Biden. (Kyodo) ==Kyodo

Japan "will mostly likely be supplied by September," Suga told reporters at his office a day after returning from the trip for a White House meeting with U.S. President Joe Biden.

The prime minister did not elaborate on details such as the number of doses.

Pfizer is the only pharmaceutical firm to have its vaccine approved for use in Japan at present. The country also has supply deals with Britain's AstraZeneca Plc and Moderna Inc. of the United States but their vaccines are pending approval by the health ministry.

Apart from the latest deal, Japan is due to receive enough doses for two shots for 72 million people under contracts with the U.S. pharmaceutical giant.

Chief Cabinet Secretary Katsunobu Kato said the same day the government is considering allowing dentists to administer the vaccine amid concerns there will be a dearth of doctors and nurses once the rollout is at full tilt.

"We will consider what is necessary to ensure the Japanese people can get vaccinated quickly and safely," he said when asked at a press conference about media reports that such a decision could be finalized this month.

Since Japan launched its vaccination program in mid-February, around 1.2 million health care workers have received at least one dose of Pfizer's two-shot vaccine.

A further 13,000 people aged 65 or older have taken the first dose, according to government data.

That adds up to less than 1 percent of the country's population of 126 million. Supply shortage has been the main reason for the slow rollout, with Japan trailing far behind countries such as Britain and the United States.

Upon assuming office last October, Suga had said he planned on procuring enough vaccines for all citizens by the first half of 2021.