The death toll from the novel coronavirus in Japan topped 10,000 on Monday, doubling in about three months, as the country battles a fourth wave of infections driven by more contagious variants, a Kyodo News tally showed.

The country's vaccination rollout, which has been criticized as sluggish, only began for those 65 and over earlier this month, and is thus unlikely to lead to an immediate improvement in fatalities. 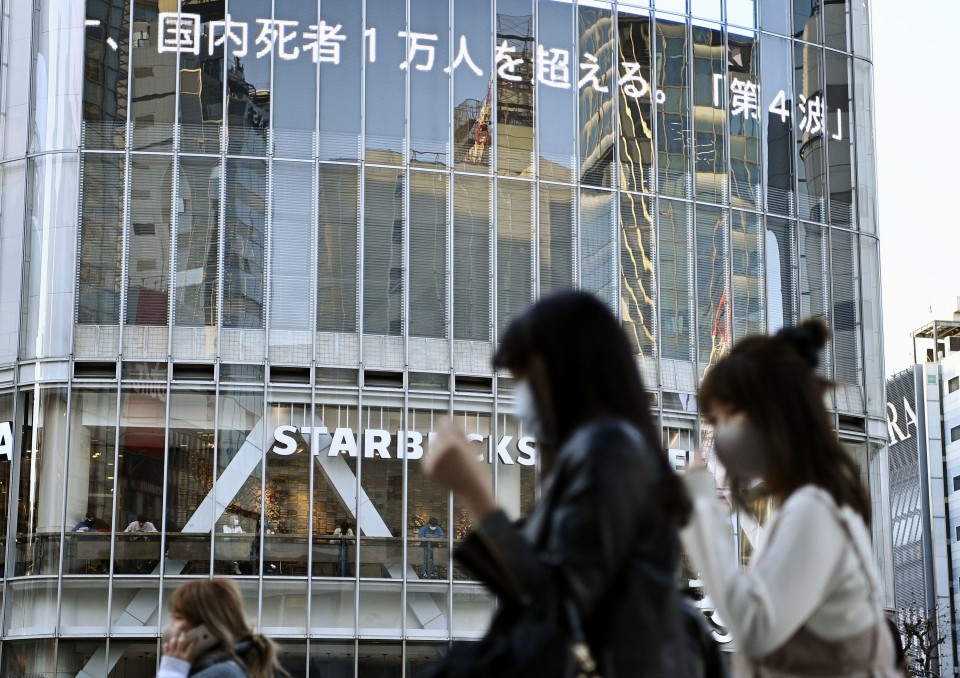 A large screen in Tokyo's Shibuya area shows the news of Japan's death toll from the novel coronavirus topping 10,000 on April 26, 2021. (Kyodo) ==Kyodo

But the government on Monday decided to open from late May a large-scale COVID-19 vaccination center in Tokyo's Otemachi business district capable of administering shots to 10,000 people per day, sources close to the matter said.

Deaths attributed to COVID-19 have surpassed 3.1 million worldwide, with Japan ranking 42nd by country, according to a tally by Johns Hopkins University. The United States is the hardest-hit nation in the world at 570,000 deaths, followed by Brazil and Mexico at 390,000 and 210,000 deaths respectively.

The number of deaths per day, which had been on a downward trend from February to March, began to reverse in April following the complete lifting of the second state of emergency, with more and more days topping 50 deaths recently.

The resurgence has forced Prime Minister Yoshihide Suga to declare a third state of emergency from Sunday to May 11 in Tokyo and the western Japan prefectures of Osaka, Kyoto and Hyogo.

Mortality rates also tend to be higher for men at 19 percent for those in their 80s and older, compared to 10.9 percent for women in the same age group.

The Tokyo vaccination center, which is expected to be operational for three months at a government building and mainly targets the elderly, aims to vaccinate a total of 900,000 people -- around 10 percent of the elderly population living in the capital and the three surrounding prefectures of Saitama, Chiba and Kanagawa.

The government plans to open similar centers in Osaka Prefecture, and is considering other areas as well.

Prime Minister Yoshihide Suga is pushing to finish inoculation of 36 million seniors by the end of July.

The government plans to utilize medically-certified Self-Defense Forces personnel to administer shots to address the dearth of doctors, and will also make use of private nurses if necessary.

To avoid confusion, the COVID-19 vaccine by U.S. company Moderna Inc., subject to approval in Japan, would be administered exclusively at those state-run facilities, rather than offering the vaccine by Pfizer Inc. in tandem, according to the sources.

The Ministry of Health, Labor and Welfare has only approved the Pfizer vaccine so far, with the Moderna vaccine expected to be given the green light as early as next month.

The latest state of emergency, covering roughly a quarter of Japan's population of 126 million and about a third of its economy, comes with less than three months to go until the Tokyo Olympics begin.

Around 3,300 new coronavirus infections were confirmed nationwide on Monday, with Tokyo accounting for 425 of the cases, down from 635 the previous day.

On Saturday, the capital reported 876 cases, the highest number since its second COVID-19 emergency was lifted in late March.