China, South Korea and Taiwan on Tuesday expressed opposition to Japan's decision to release into the Pacific treated radioactive water that has accumulated at the crippled Fukushima Daiichi nuclear power plant in two years' time, with Beijing calling the move "extremely irresponsible."

But Japanese government officials pointed out some other countries with nuclear power plants, including South Korea, have released treated radioactive water from the plants into the environment.

Chinese Foreign Ministry spokesman Zhao Lijian said China urged Japan not to release the treated radioactive water at the Fukushima plant "without permission" from other countries and the International Atomic Energy Agency, or IAEA. 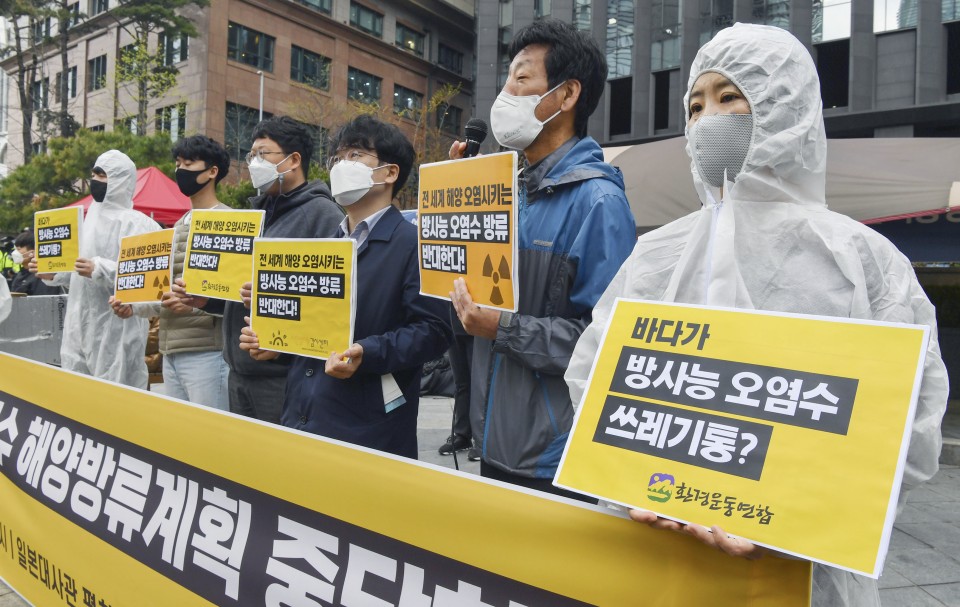 South Korean environmental group members gather near the Japanese Embassy in Seoul on April 13, 2021, to protest against the Japanese government's decision earlier in the day to release treated radioactive water from the crippled Fukushima Daiichi nuclear power plant into the sea. (Kyodo) ==Kyodo

"The decision...was a unilateral move made without enough discussion or understanding from us, South Korea, which is the closest country geographically," Koo said at a press briefing.

"The government will never tolerate any actions that could be harmful to our people's health," Koo added.

In the capital Seoul, several civic groups held a rally protesting Japan's decision, calling on Tokyo to scrap the plan. "The sea is not a trash can. The Japanese government has no right at all to dirty the waters," said one member of a group at the rally.

Meanwhile, Taiwan's Atomic Energy Council called Japan's decision regrettable, noting that legislators and others on the self-ruled island have opposed such a move.

But Ou told reporters the Taiwanese government has received a notice from the Japanese government that said the water will be treated in accordance with the standard of the International Commission on Radiological Protection, or ICRP.

The decision by the government of Prime Minister Yoshihide Suga had followed years of discussions on how to dispose of the water used to cool melted fuel at the plant in northeastern Japan, which was hit by a massive earthquake and tsunami in 2011.

China, South Korea and Taiwan have all kept restrictions on some food imports from Japan in the wake of the nuclear disaster. The latest decision is likely to delay the lifting of those restrictions still in place.

In contrast to South Korea and China, the United States showed understanding of the Japanese plan, saying shortly after the Japanese announcement that Tokyo's decision-making process was "transparent."

"We thank Japan for its transparent efforts in its decision to dispose of the treated water from the Fukushima Daiichi site," Secretary of State Antony Blinken tweeted, adding that the United States looks forward to Japan's continued coordination with the IAEA.

State Department spokesman Ned Price emphasized in a press release that Japan has worked closely with the U.N. nuclear watchdog to manage the aftermath of the accident 10 years ago, including over cleanup efforts.

Noting that the United States is aware that the Japanese government examined several options related to the management of the processed water, Price said Japan has been "transparent about its decision" and "appears to have adopted an approach in accordance with globally accepted nuclear safety standards."

While some of Japan's neighbors reacted harshly on the release of the treated water from which radioactive materials have been removed except tritium, which is related to hydrogen and said to pose little health risk in low concentrations, Japanese government officials said other nations have discharged tritium into the sea and into the air.

According to the officials, South Korea releases tritium into the environment from about 20 nuclear reactors, many of them located on its coast facing the Sea of Japan.

The concentration standard for releasing tritium into the environment is decided by each country, following the limitation of radiation exposure per year set by the ICRP.

The Fukushima Daiichi plant suffered core meltdowns in the wake of the March 2011 earthquake and tsunami disasters. Massive amounts of radioactive water have been generated in the process of cooling melted reactor fuel.

The water is treated at a processing facility on the premises to remove most contaminants but the process cannot remove tritium, a radioactive byproduct of nuclear reactors. The treated water, stored in tanks, has been building up, with storage capacity expected to run out from around fall next year.