When Niesha found out she was pregnant, her mother was unhappy, so the then 16-year-old moved from home and left school. But she always planned to go back and complete her education one day.

"Obviously, dropping out of school at 16, I didn't really have any qualifications or anything like that, so I needed to set -- not only myself, but my child -- up for life," she said, explaining she expected to one day go to a technical college.

But luckily for Niesha, she moved in with a family who referred her to Ipswich State High school, which runs a unique program that caters explicitly to pregnant and parenting women, aged 24 and under, who want to complete high school. 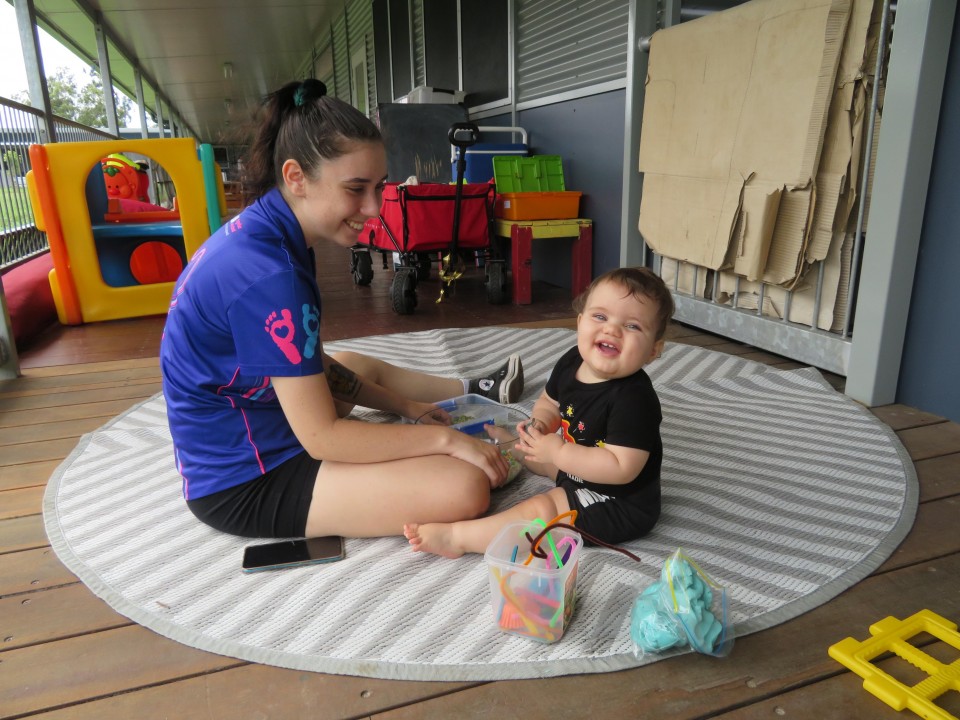 Located almost an hour southwest of Brisbane, Queensland, the Young Families Connect program is a rare opportunity for young mothers to bring their children to school three days a week while also providing access to medical services, child care, and social support programs where necessary.

Currently, 26 young women, mostly aged 18 or under, are enrolled in the program, which sees them take vocational education subjects such as financial literacy and general adult education and mainstream subjects if they're particularly interested.

Now 18, Niesha brings her 1-year-old-son Malachai to school, where he plays in a creche, or day-care facility, so she has time to study in a separate, baby-free room. A shared nursery, outdoor play area, and kitchen allow the mothers also to spend time with their children.

"We have full trust in the ladies who take care of the kids in the nursery (so) we're actually able to sit down and get our work done. It's good. It's really good," she said.

Young Families Connect has been running in its current form for about six years. However, the program is the brainchild of principal Simon Riley, who encountered his first pregnant students 20 years ago at a different school.

"They were going to drop out, and I said 'No, you're not going to drop out,' and we found a way of keeping them at school for as long as we could with various organizations," said Riley, 64, adding it's easy to accommodate pregnant and parenting students "if you care enough."

For Ipswich State High School, that means being as flexible to a young mother's schedule as possible and not necessarily policing ordinary high school concerns like attendance, provided students stay engaged.

"The majority (of the mothers) come from very complex backgrounds," says program manager Corinne Harper, explaining that many women have experienced domestic or intimate partner violence, as well as homelessness.

"For some girls who have all this going on, we may not see them for a little while because they're looking for somewhere to live, or they're dealing with child safety...(But) we know that a young woman who is engaged with the program, her attendance always picks up eventually."

Harper, 56, says she's always been passionate about women's rights and believes that for too long, society has not expected young women to stay in school after they become a parent, meaning many miss out on completing their education and future career opportunities as a result. 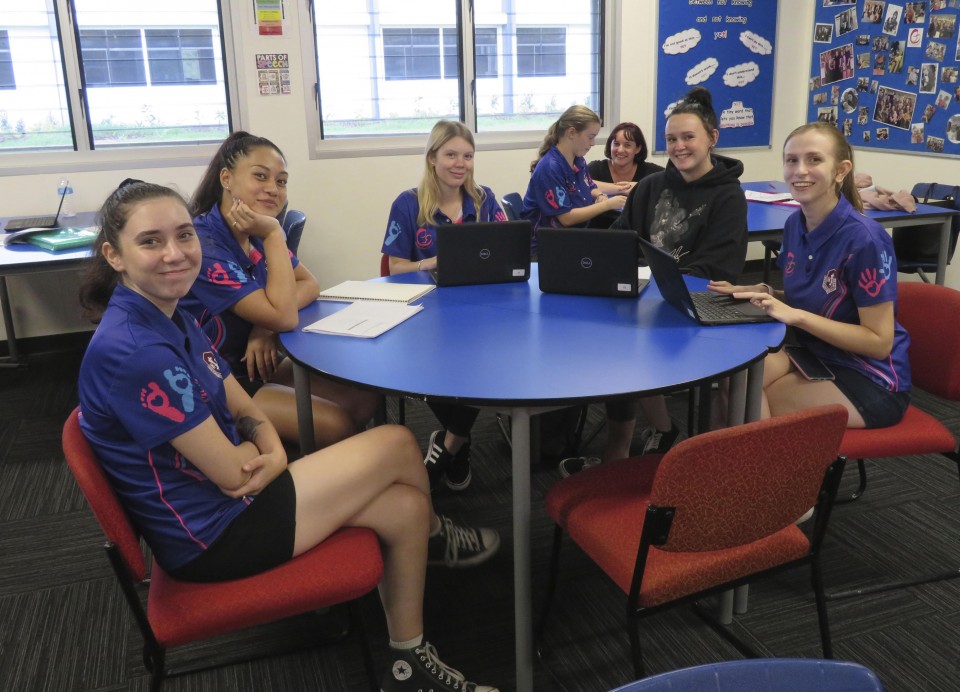 Niesha (far L) and her schoolmates are pictured at Ipswich State High School in Queensland, Australia, in March 2021. (Kyodo)

"When you educate a mother, you educate her family," Harper says. "Getting these girls feeling empowered to finish school and get their senior certificate sends a very strong message to her family, and she will make a difference."

According to the Australian Bureau of Statistics, levels of tertiary education in the Ipswich region are lower than the rest of Australia, with 12.8 percent of people aged 15 and over attaining a bachelor's degree or higher, compared with 22 percent among the national population.

Although secondary school completion is slightly higher than the national average, more students leave school at the end of middle school, with 13.8 percent of the local population listing their highest level of education as Year 10, compared with 10.8 nationally.

Principal Riley says mothers who attend the program and students in the mainstream school reflect the broader Ipswich community.

He adds that in the state of Queensland, students who complete high school have an 80 percent better chance of obtaining employment.

Part of students' success moving straight from education into work is the wide variety of vocational education subjects ordinarily offered at technical colleges, available to the entire student body, including the mothers' program.

Niesha, who is completing certificate-level courses in nail technician and retail cosmetics, says this means that after graduation, she'll be able to run a home salon until her son is old enough to go to school, after which point she hopes to study midwifery at university.

However, for soon-to-be-mother Breeanna, the overall support and care from the program have been the most impactful benefits.

"When I found out (about the pregnancy), I was scared. I didn't really know what to do," the 18-year-old said. "(But) you get heaps of support from here. Everyone checks on everyone." 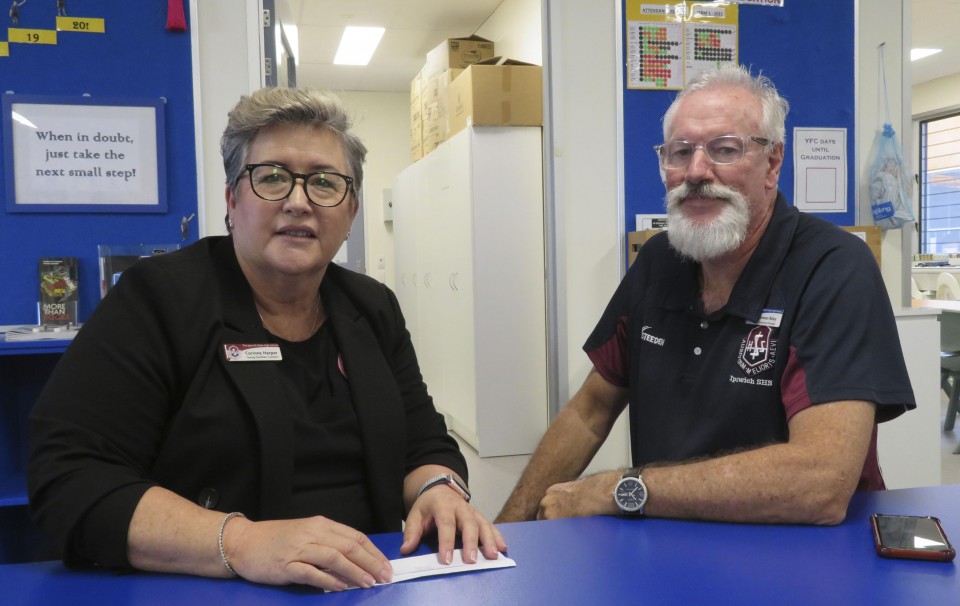 Breeanna, who also hopes to become a pediatric nurse one day, said not feeling judged by staff and other participants has helped make her feel more comfortable and relate to others.

Program manager Harper says by making sure mothers feel safe and welcome, the facility has deliberately created an environment that is "a bit like a family." This is reinforced by other mainstream teachers who have recently given birth using the program's space to pump their own breastmilk or by former students occasionally returning for playgroup and helping the newer mothers.

"Often when they first walk through the door, we get: 'I'm dumb, I'm stupid, I can't do this,'" she says. "But when they graduate, their whole persona is different. They're confident parents, they're confident citizens in our community."

With births to teenage mothers making up over 2 percent of all live births in Australia, both Harper and Riley are aware there's a great need for similar programs to be established elsewhere and remain hopeful that other schools or governments may be prepared to step in.

Likewise, both Niesha and Breeanna would like to see more mothers have the opportunity to participate in something similar.

"You're never too old, or too late to get your education," encourages Niesha.

"And it's okay to be scared. There are other people out there to support you. You've just got to reach out," says Breeanna.