Tougher measures against the novel coronavirus were introduced in Tokyo and the western Japan prefectures of Osaka, Kyoto and Hyogo on Sunday under a third state of emergency amid a virus surge, but they appeared not to deter crowds in some downtown areas.

Under the new restrictions, large commercial facilities, theme parks and movie theaters closed across the board as requested. But with some stores sidestepping the government's request by continuing to serve alcohol, many of those that have complied have called the measures "meaningless." 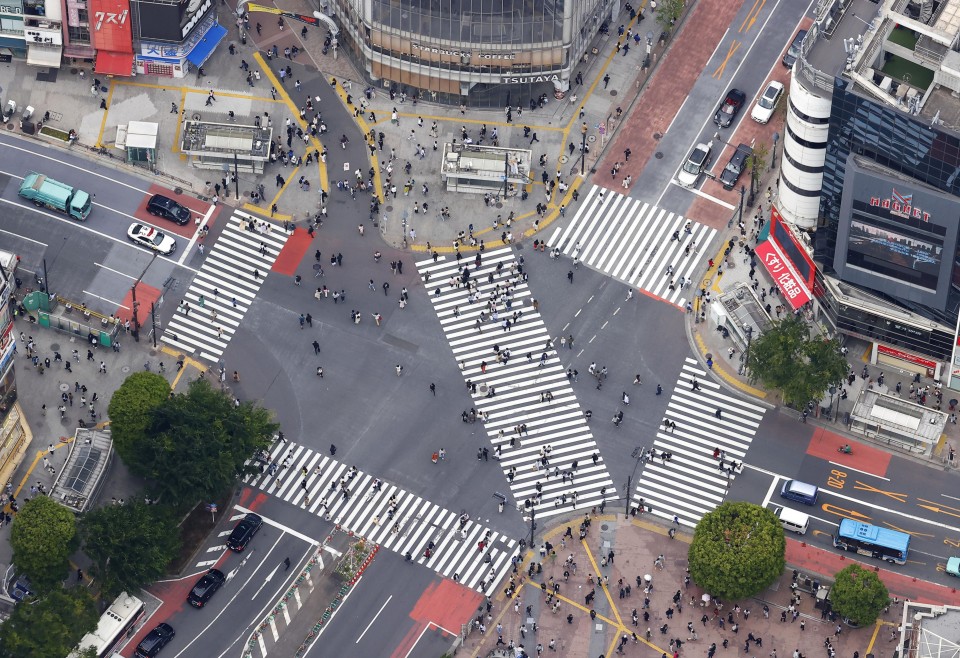 Photo taken from a Kyodo News helicopter shows a scramble intersection in Tokyo's Shibuya area on April 25, 2021. A third coronavirus state of emergency came into force the same day in the capital and the western Japan prefectures of Osaka, Kyoto and Hyogo amid a resurgence in infections. (Kyodo) ==Kyodo

The emergency declaration will be effective for 17 days through May 11 in a bid to curb infections during the upcoming Golden Week holidays from late April to early May.

Yasutoshi Nishimura, the minister in charge of the government's coronavirus response, has called on people to refrain from nonessential outings.

"I would like people to think back to last year and enforce staying at home," he said, referring to the first state of emergency issued in April last year.

While the state of emergency does not entail a hard lockdown of the kind some other countries have imposed and largely relies on the cooperation of the public and businesses, the measures have more teeth than the previous declaration in January. 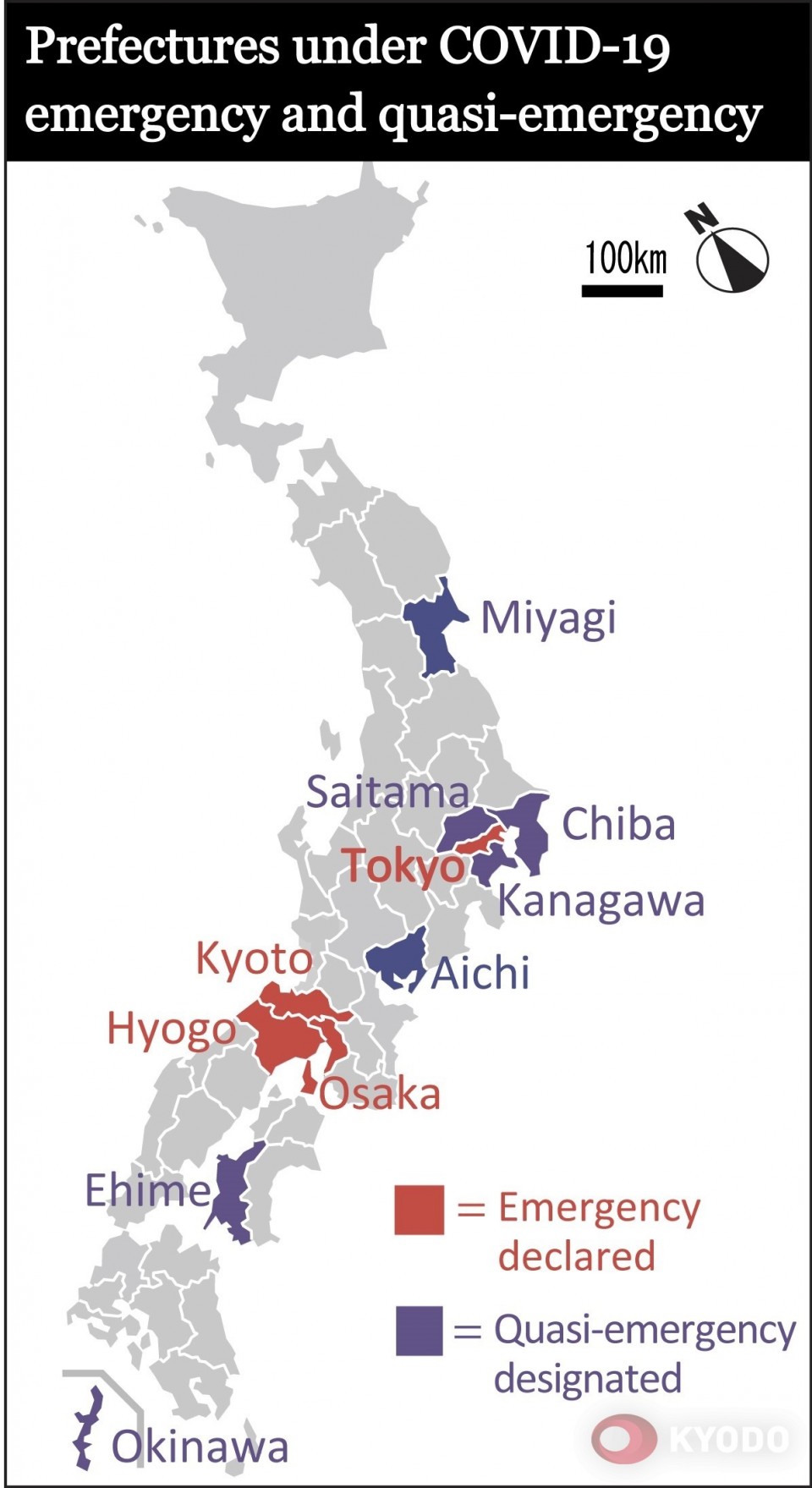 Authorities are also asking the operators of karaoke establishments as well as tourism spots such as Tokyo Sky Tree and Universal Studios Japan in Osaka to close. Sports events will be held without spectators.

Department stores in the designated areas are only selling food and other daily essentials.

On the first day of the new emergency declaration, shoppers increased from the afternoon in some areas in the four prefectures. In Tokyo, the majority of non-department stores remained open for business on the main street of the glitzy Ginza district, attracting shoppers.

While the government has requested establishments serving alcohol to close during the state of emergency, some eateries near Ueno Station in Tokyo were seen still providing alcoholic drinks or allowing customers to bring their own.

"I am not convinced with the explanation given to completely stop drinking, so I don't feel like obeying," said a 34-year-old man from Tokyo's Nakano Ward as he sat chatting and laughing without a mask on at a pub.

In the busy Dotonbori shopping district in Osaka, many eateries had complied with requests to close, but groups of youths holding shopping bags and people street drinking could also be spotted.

Takaharu Nakajima, the manager of the Dotonbori branch of the popular Kushikatsu Daruma restaurant chain, said he had stopped serving alcohol at his store but that "there is no sense that customers have drastically decreased." 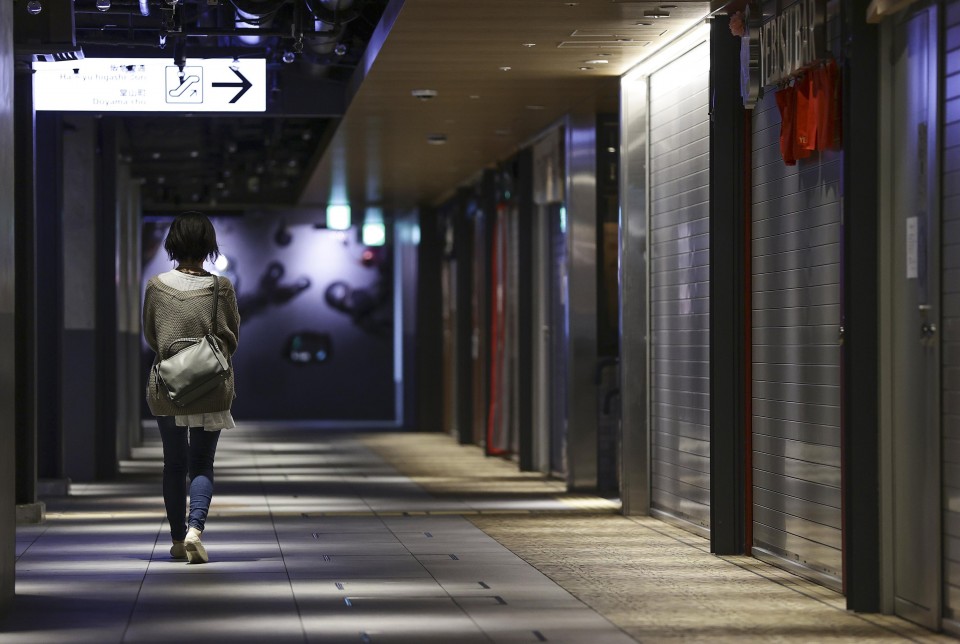 Shops are closed at Whity Umeda underground shopping arcade in Osaka on April 25, 2021, due to a fresh coronavirus state of emergency in the western Japan prefecture as well as the neighboring prefectures of Kyoto and Hyogo and Tokyo amid a resurgence in infections. (Kyodo) ==Kyodo

Meanwhile, public transport operators such as train and bus companies have been asked to end operations earlier on weeknights, with reduced services on weekends and holidays.

While a quasi-state of emergency was designated in the major cities of Tokyo, Osaka and Kyoto as well as in Hyogo and six other prefectures earlier this month, the measures have been unsuccessful in bringing down coronavirus cases and easing the strain on the health care system.

Japan on Sunday reported over 4,600 new coronavirus infections, with its cumulative death toll fast approaching 10,000 at 9,990.

The percentage of COVID-19 patients who need hospitalization and have been admitted into a medical institution has been below 25 percent in Kyoto, Osaka and Hyogo prefectures, equivalent to the highest severity level on a four-point scale, sources close to the matter said Sunday.

The percentage nationwide is also a low 26 percent, with 41 percent of people recuperating in their own homes.

Japan is considering operating large-scale COVID-19 vaccination centers capable of administering shots to 10,000 people per day, as part of efforts to speed up a vaccine rollout that is trailing behind other countries, government sources said Sunday.