Japan reported on Wednesday more than 3,000 new coronavirus cases, the highest level in over two months, as Osaka Prefecture confirmed a record 878 cases and Tokyo logged a two-month high of 555 in what experts fear is a sign of a fourth wave of infections in the country.

The Osaka prefectural government declared a medical state of emergency due to the increased strain on its health care system. The second such action after December comes as the hospital bed occupancy rate in the western Japan prefecture for COVID-19 patients with severe symptoms topped 70 percent.

In Tokyo, it marked the first time that the number of infections surpassed the 500 mark since Feb. 6. The average daily tally in the capital for the last seven days has risen to the 400 level since the central government lifted the state of emergency over COVID-19 in Tokyo and adjacent areas on March 22. 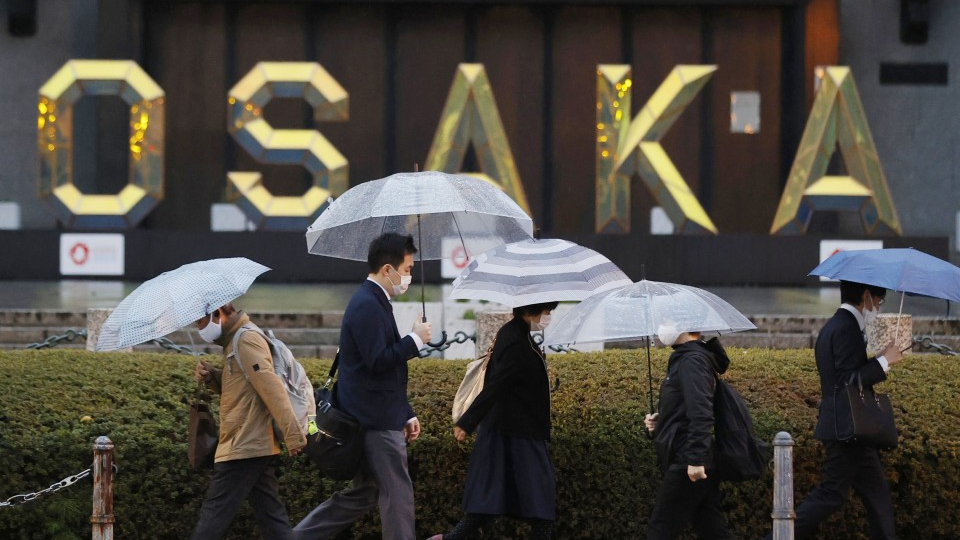 People wearing masks walk in front of the Osaka city government office in western Japan on April 6, 2021, amid a resurgence in coronavirus infections. (Kyodo) ==Kyodo

The nationwide tally, which totaled 3,451 on Wednesday, last exceeded the 3,000 mark on Jan. 30 when the country's second state of emergency was in place for 11 prefectures including Tokyo and Osaka.

The government lifted the state of emergency in Osaka and five other prefectures on March 1, about three weeks ahead of the Tokyo metropolitan area.

Citing the sharp rise in the number of infections in Osaka since late March, Toshio Nakagawa, head of the Japan Medical Association, said he thinks the lifting of the emergency was a bit too early.

Given the situation in Osaka, Nakagawa said, "It is natural to suspect that Tokyo and three neighboring prefectures could follow suit," in reference to Kanagawa, Saitama and Chiba prefectures.

"We are on the verge of the government issuing the next round of a state of emergency," he said at a news conference. 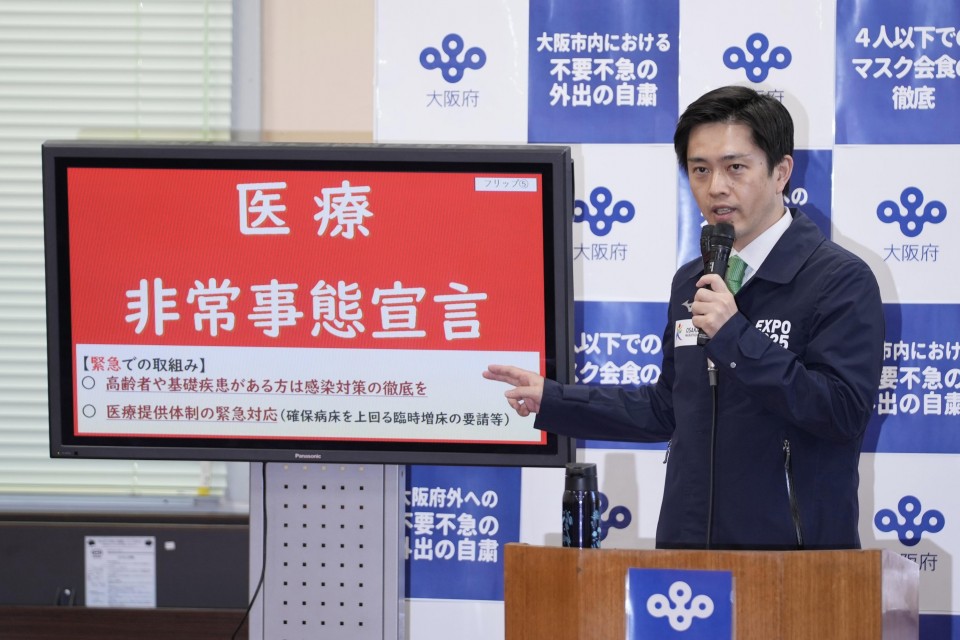 Osaka Gov. Hirofumi Yoshimura meets the press at the prefectural government office on April 7, 2021, after the western Japan prefecture decided to declare a medical state of emergency. (Kyodo)

"To reduce the number of virus patients by even one person will lessen the strain on the medical system," Yoshimura told reporters.

The Osaka government will expand the area in which residents should refrain from nonessential outings to the entire prefecture from Osaka city alone, effective Thursday. In line with the change, Yoshimura said the Tokyo Olympic relay will not take place on roads across the prefectures, when its legs are slated on April 13 and 14.

Yoshimura also underscored the need to act against more contagious variants, which make up around half of infections confirmed in the prefecture.

In neighboring Hyogo Prefecture, the number of infections reported Wednesday came to a record 328, two days after it was subject to quasi-emergency measures along with Osaka and Miyagi prefectures. 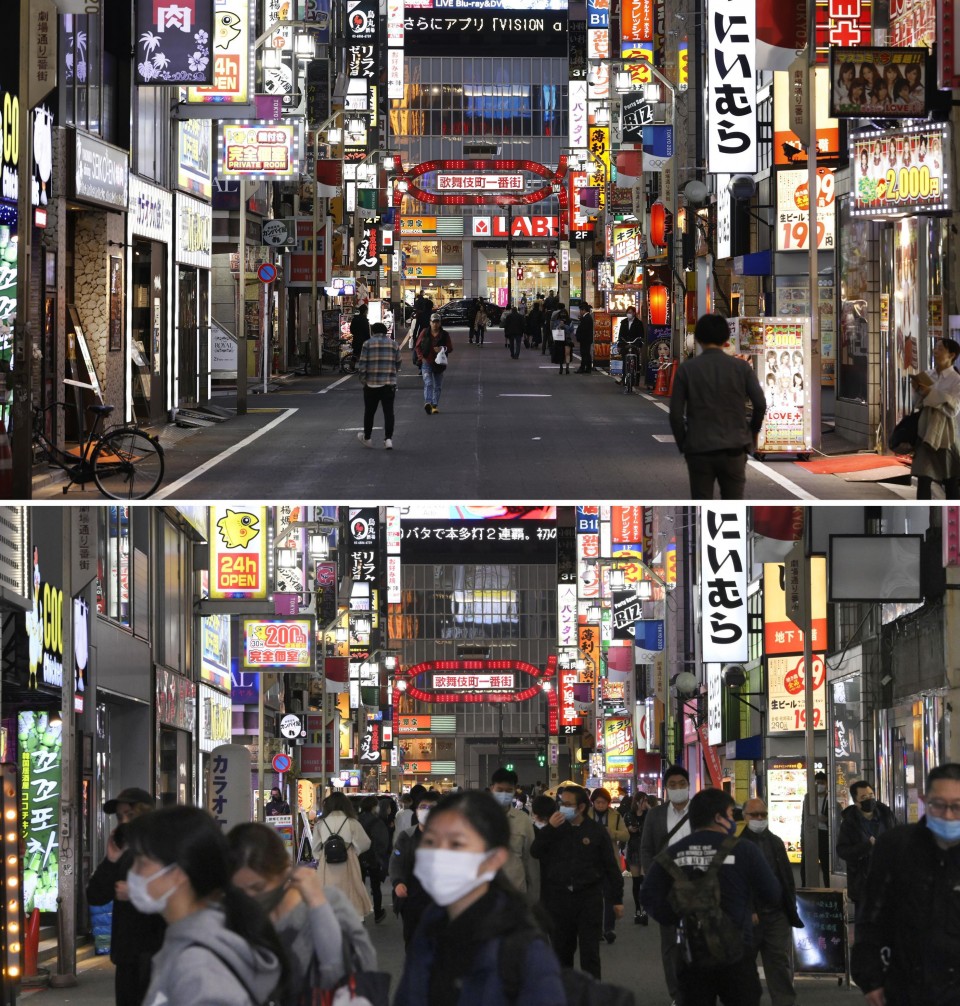 Top photo shows several people walking a street in the Kabukicho nightlife district in Tokyo's Shinjuku area on April 7, 2020, when a coronavirus state of emergency was declared in the Japanese capital and six other prefectures. Bottom photo shows the same place on April 6, 2021, with people having returned to the streets. (Kyodo) ==Kyodo

The three prefectures became the first in Japan to be recently designated as being on the brink of a state of emergency under a revised law that took effect in February, which includes fines for restaurants and bars that ignore orders to shorten operating hours.

Shigeru Omi, head of the government's COVID-19 panel, told a lower house committee that the government should start discussions on whether to designate Tokyo for such measures as well.

Omi added that the prefectures neighboring Tokyo as well as Kyoto and Nara prefectures near Osaka are also possible areas which should be considered as being on the brink of a state of emergency.

Tokyo Gov. Yuriko Koike told reporters the metropolitan government is considering requesting that the central government designate the capital for a quasi-state of emergency.

Koike is set to hear views from related experts in a meeting on Thursday.