When making a high-profile move to a Liverpool team that went on to win their first league title in 30 years, Takumi Minamino could not have expected such a turbulent introduction to a new country.

The Japan attacker scored against his future employers while playing for Red Bull Salzburg in October 2019 in the Champions League before moving to Merseyside early in 2020, joining Jurgen Klopp's reigning European and Club World Cup champions.

Vying for a starting berth in an established side -- especially having to break into the Reds' world-class front three of Roberto Firmino, Sadio Mane and Mohamed Salah -- was always going to be a huge ask, but the outbreak of the coronavirus made it even more difficult to settle and flourish. 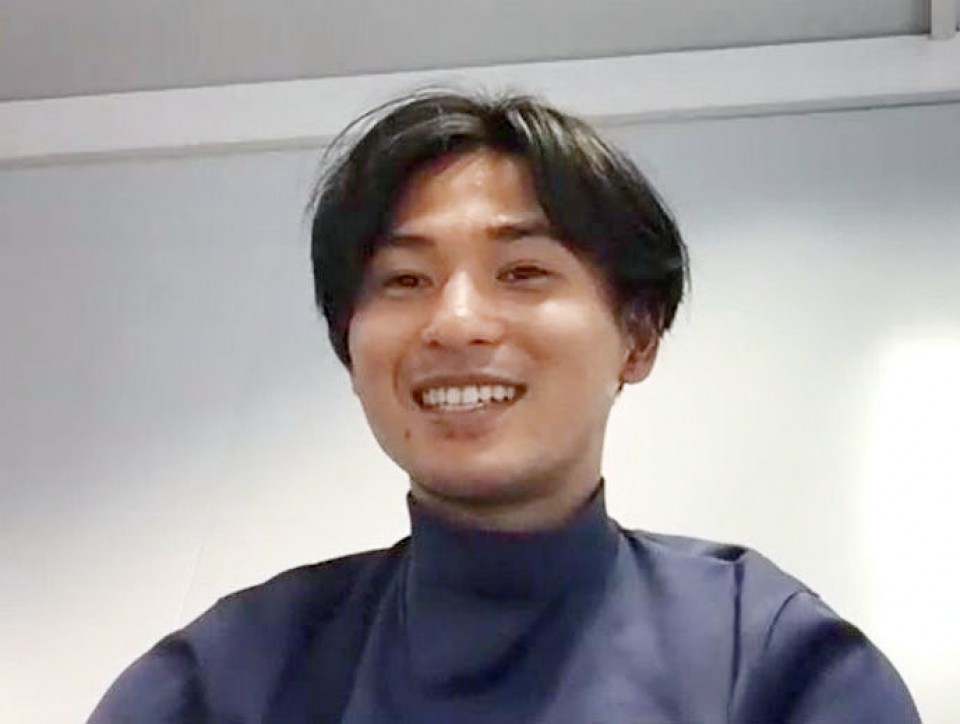 "The first lockdown (from March 23) was extremely difficult. There were no restaurants open and nobody knew when football would restart, and I really wanted to go back to Japan at that time," Minamino told Kyodo News in early April. "I couldn't even meet with anyone, so mentally it was very tough."

Liverpool strolled to the Premier League title, lifting the trophy inside empty Anfield in July. Minamino then enjoyed a positive preseason ahead of the current campaign, scoring a goal against Arsenal in the Community Shield in late August.

But the majority of the 26-year-old's time on the pitch this term continued to be off the bench or within a second-string starting lineup in cup ties, with added competition provided by new signing Diogo Jota.

"It was very difficult to get a chance in that team, but that was always the challenge for me from the beginning, so I wasn't in a negative mindset at all, even in training," Minamino said. "It was just about trying to play in matches, get into the starting lineup, and figuring out what I can do to achieve those goals."

Minamino finally scored his first league goal for Liverpool on Dec. 19 when he kicked off a 7-0 rout at Crystal Palace. But after getting that lift he was desperate for, Minamino was given just six minutes of league action in the following seven games, coinciding with the Reds' slide from the top of the table. 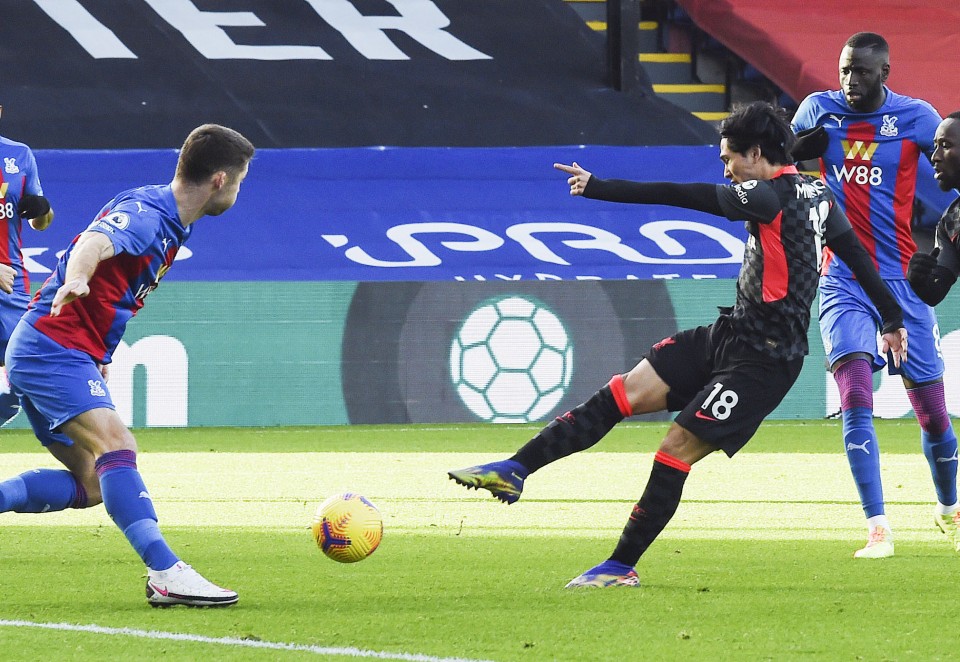 An eleventh-hour loan offer from Southampton came unexpectedly on the night of Feb. 1, and the player admits he had just "an hour or two" to make a call on the move.

"I had a lot of things on my mind to put things into perspective," he said. "But yes, it didn't take long to make a decision and tell (Liverpool) that I wanted to go."

"It was like just packing my bags with minimum stuff and get into the car and leave...To be honest I wouldn't want to go through that again. But, yes, maybe it was a good experience."

Minamino, who got tips on his new city from former Saints and current Japan national team captain Maya Yoshida, knows all eyes are on how he fares at his new club over the rest of the season.

"I was happy when I got the offer. I knew the manager from his time at Leipzig, and when we spoke on the phone he said he knew me, so that helped a lot," Minamino said of Austrian manager Ralph Hasenhuttl.

"I wanted to get more playing time. I knew that if I didn't make an immediate impact, it wouldn't be good for the team or me. I think it's fair to say that there was some pressure. But...I tried not to think about it too much."

And he was quick to show what he is capable of with a brilliantly-taken goal on debut at Newcastle. 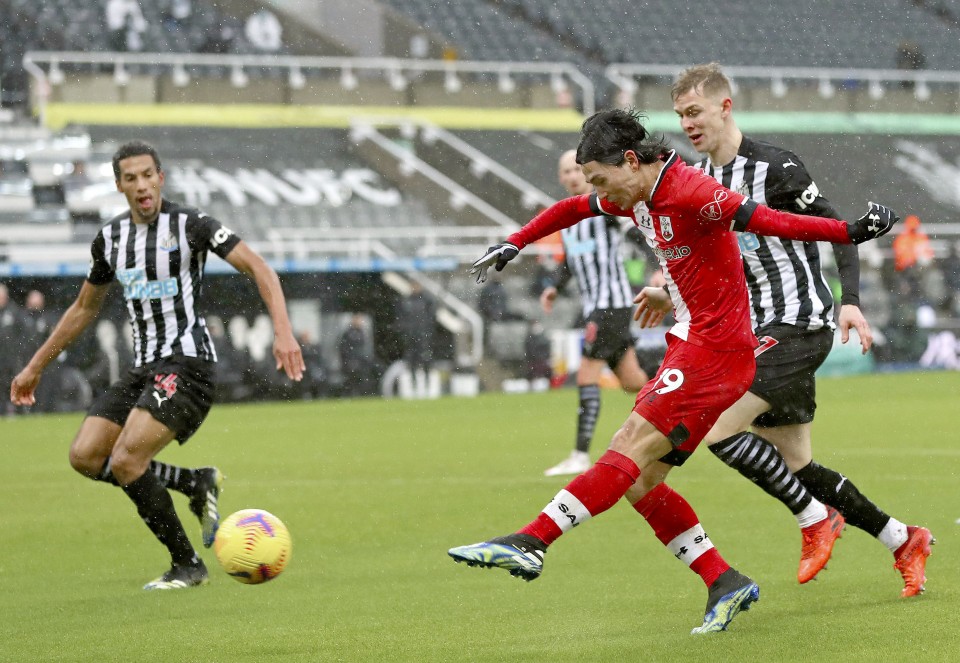 Takumi Minamino on Feb. 6, 2021 in Newcastle upon Tyne, England. (Danehouse/Getty/Kyodo)

"I think it was the third day after I joined, but I had to show something. Looking back now, scoring a goal did take some weight off my shoulders and made me feel like I belong here."

Although Minamino is still coming to grips with the English game, he once again proved he can deliver against the league's top sides when he breached the stingy Chelsea defense on Feb. 20. 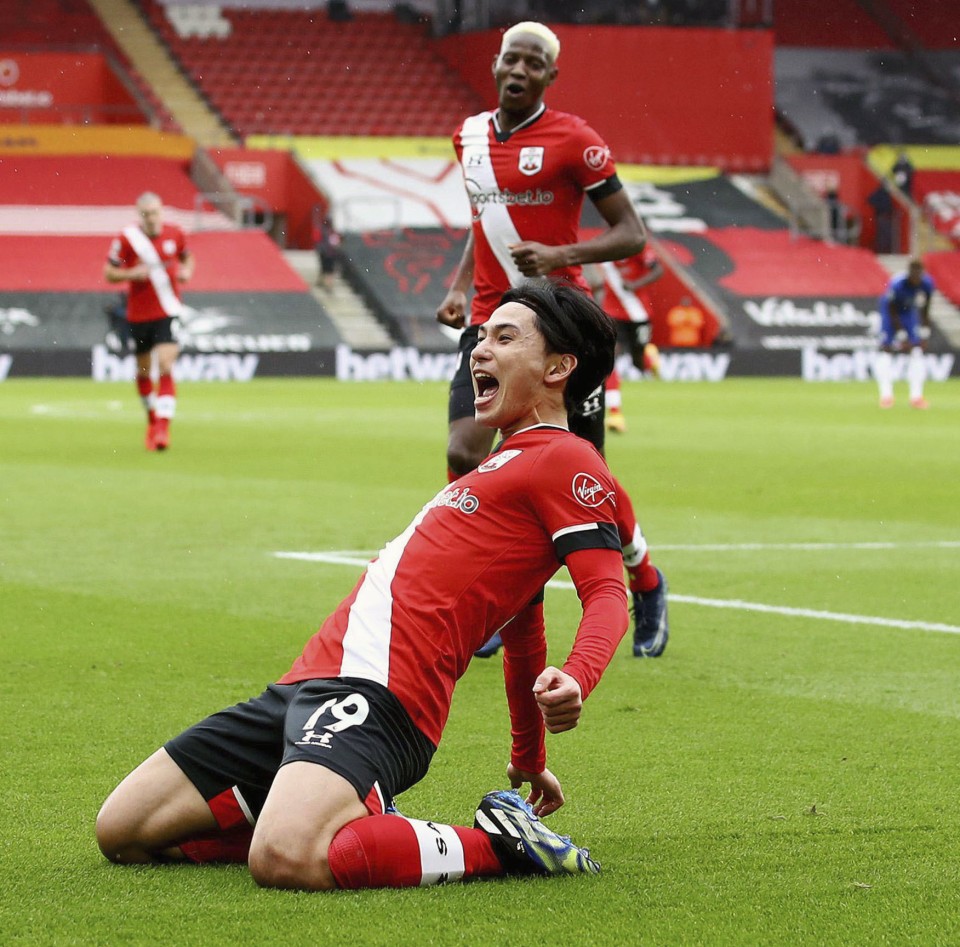 "I tried to run into space behind the defenders. Then came this chance where I got an excellent pass," he recalled. "I could see the goalkeeper's movement, and I was also aware of the defender coming to slide tackle in my peripheral vision."

He has seen limited playing time for Southampton since making a trip back to Japan for international duty in late March, with the return of another loanee, Everton's Theo Walcott, from injury keeping him out of the team.

But the Cerezo Osaka youth product hopes he can show more of his quality before the loan ends.

"I'm hoping it will be a good experience, but I also feel I need to make a mark here," he said. "I'm not aware of what other people are saying, things might be said because I'm from Liverpool, but I don't read any of it at all."

"Personally, I get on really well with my teammates, I like the environment and most importantly, I'm getting game time which gives me the most satisfaction as a footballer."

Upon the surprise departure of Minamino, Liverpool's Klopp reflected that "we didn't give him enough chances" and "Takumi is a long-term project and always was." With reportedly no option to make the move permanent, Minamino's future is expected to be at Liverpool next season.

"I am focusing on the present and what I can do now. I'm a footballer so I don't know where I'll be playing in six months' time, but I want to be playing at a high level," Minamino said.

Hasenhuttl understands the position Minamino found himself in at the defending champions, and is pleased with his contributions to a team that is likely safe from relegation, 10 points clear of the drop zone.

"It is never nice for a player if you don't have the game time you want to have. It's always hard only to train and not be seen as part of the first eleven," he said. "It definitely helps your mentality to get a lift and get a chance to play."

Does Minamino feel he made the right decision in taking a step back, to take two steps forward through securing more Premier League starts and minutes?

"I think so. I'm going to work hard to make sure I'll be able to say (that is the case) when the season ends," he said.

"It's totally different. You have to play in matches to really understand. That's why I chose to come here. I don't think I would have left Liverpool if I thought I could develop just by training there."