Osaka Gov. Hirofumi Yoshimura indicated Monday he intends to ask the central government to declare a fresh state of emergency in Osaka Prefecture amid a resurgence of novel coronavirus cases.

Tokyo is also considering making such a request to the government as early as this week, sources close to the matter said, just one month after the previous state of emergency was lifted. The metropolitan government may ask for closures of some businesses to contain the virus, according to the sources.

Osaka's decision to request a declaration, which would entail stronger anti-virus measures such as store closures than the currently existing steps, is expected to be formalized at a task force meeting of the prefectural government on Tuesday.

"The tough situation continues in terms of infections and health care availability. We are in a critical situation," Yoshimura told reporters. 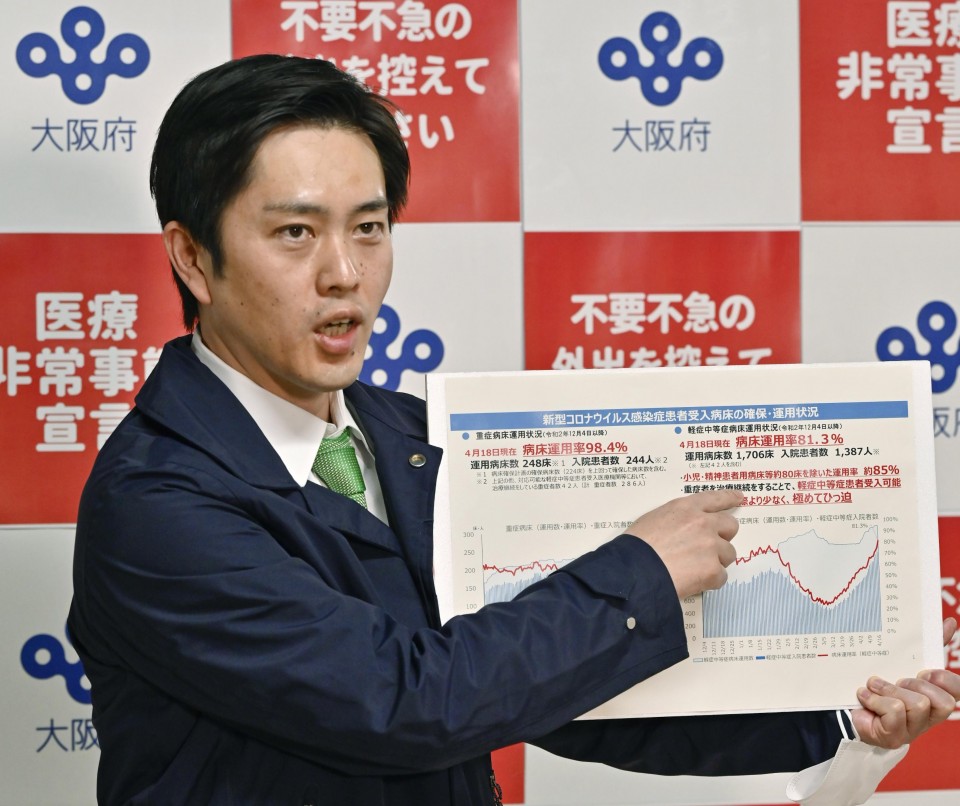 The western Japan prefecture saw a record 1,219 new coronavirus cases logged on Sunday, revised from the initially announced 1,220, despite implementing tougher anti-virus measures under a quasi-state of emergency since April 5, including shorter operating hours for restaurants.

The prefecture logged 719 new cases on Monday, a record high for that day of the week, even as the tally tends to come in lower on Monday.

Whereas under the quasi emergency, governors can only request or order shorter business hours, a state of emergency would allow the closure of stores and higher penalties for restaurants and bars that do not comply with requests for curtailed operations.

"It is necessary to request the closure of large-scale commercial facilities such as theme park and eateries where infection risks are high," Yoshimura said, while noting that steps to be taken under a state of emergency are decided by the central government.

Osaka Mayor Ichiro Matsui separately told reporters that classes at public elementary and junior high schools in the city will be held online in principle once a state of emergency is issued.

Yoshimura said he could jointly make the request for a state of emergency with nearby Kyoto and Hyogo prefectures, where the numbers of infections are also growing.

"It is better that we move in step with Osaka," Hyogo Gov. Toshizo Ido told a press conference.

Chief Cabinet Secretary Katsunobu Kato said the central government will swiftly consider imposing the measure once it is requested.

"The increasing trend (of coronavirus cases) continues and we are deeply concerned," Kato said about the situation in Osaka during a regular news conference.

Tokyo Gov. Yuriko Koike said Sunday she might make the request after the capital's daily coronavirus cases surpassed 500 for the sixth consecutive day, with only three months left before the opening of the Tokyo Olympics. Tokyo reported 405 new cases on Monday.

The last state of emergency was in place in Osaka Prefecture through the end of February and in Tokyo through March 21. If declared again, it will be the third time for both areas.