A photo book by Jun Nakasuji on the Fukushima nuclear disaster opens with an image reminiscent of ink-wash paintings of power lines stretching out into the distance across hills obscured by thick white mist from the stricken Daiichi plant.

It is an apparently gentle start to a book that follows up with shots of denuded human landscapes -- abandoned homes and school fields covered by long grass and blooming flowers -- along with those showing a new, alien presence -- close-up shots of black bags of contaminated soil heaped up on beaches or disused fields. 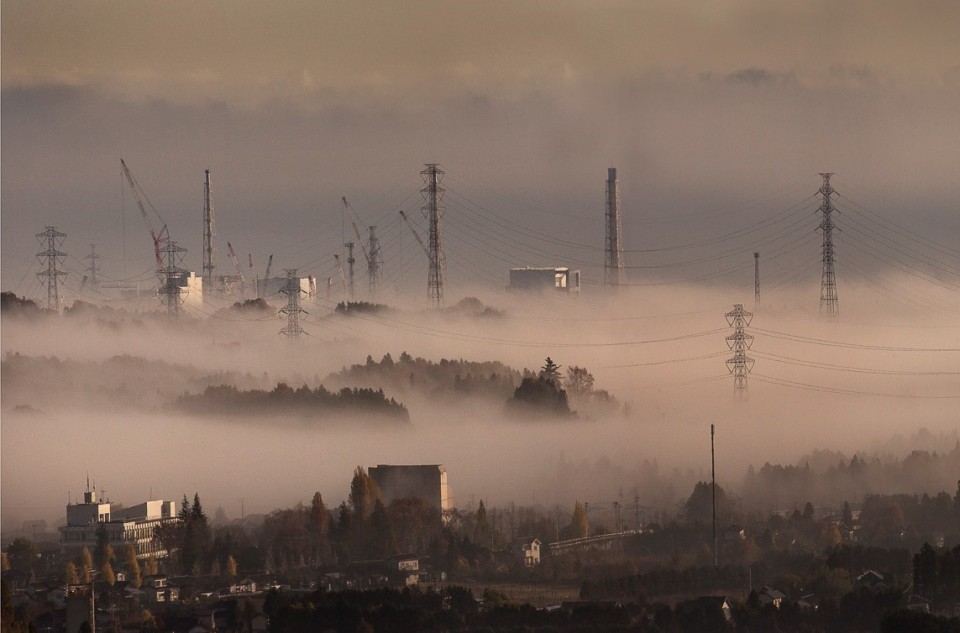 The Fukushima Daiichi nuclear power plant is seen enveloped in thick white mist from Mount Higakure in the town of Okuma, Fukushima Prefecture, in November 2016. (Photo courtesy of Jun Nakasuji)(Kyodo)

But it is the first image that is the key to the message Nakasuji, 54, wants to convey in his second book featuring Fukushima, titled "Konsento no Mukogawa" (The Other Side of the Socket) and released on Feb. 22 ahead of the 10th anniversary of the triple disasters of megaquake, tsunami and nuclear crisis that hit northeast Japan on March 11, 2011.

Electricity users in Japan, he explained in a recent interview, are connected to nuclear power plants located in remote regions through such lines, but their thoughts flow less easily back up the lines to consider where their electricity is coming from and at what cost to the environment.

And so when the tsunami hit the plant, knocking out the power systems needed to cool the nuclear reactors and spent fuel pools and causing meltdowns and explosions, electricity users were concerned about the radiation release from the plant and the power outage -- but only for a while. And then, he says, they began to forget.

"I want the photos in the book to remind people of the nuclear disaster and help them reconsider issues of nuclear energy," he said. "We, electricity users, need to imagine what is happening on the other side of the socket."

For his latest book on the Fukushima disaster, which is also accompanied by short poems he wrote and by essays both by him and contributors, he has paired pictures of the Daiichi plant with those of the Chernobyl plant in Ukraine, the scene of another nuclear accident that he has chronicled over the years.

Some matching images from the two disasters are brought side by side -- for instance, one set shows classrooms in ruined schools at the two sites, each with a piano, while another shows weather-beaten, fading posters of former Japanese Prime Minister Shinzo Abe and Soviet founder Vladimir Lenin. 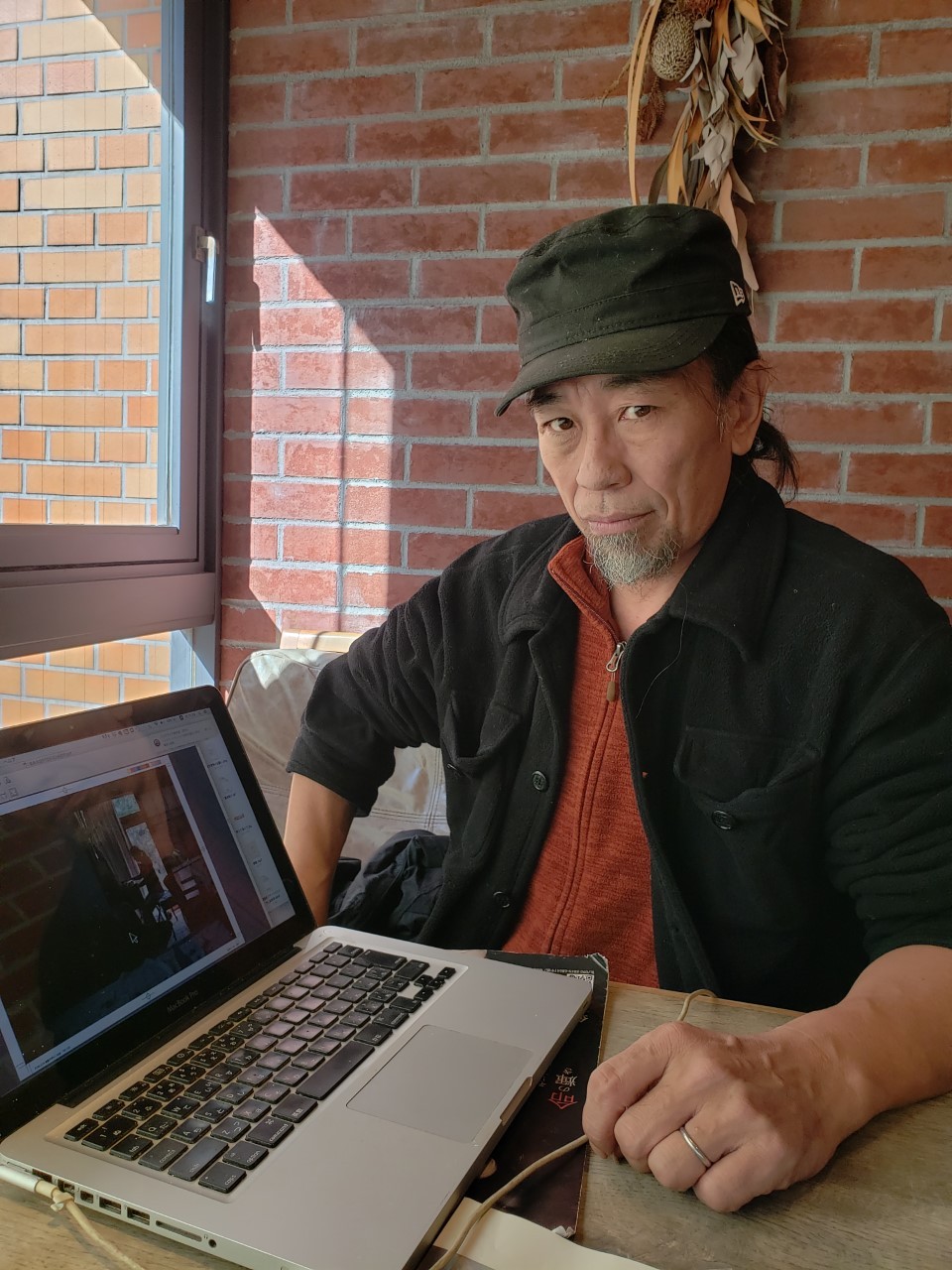 Jun Nakasuji, a photographer who has taken pictures of the crippled Fukushima Daiichi nuclear power plant and its environs, talks about his latest photo book in Tokyo on Feb. 4, 2021. (Kyodo)

As a photographer, Nakasuji started life as a freelancer covering fashion and the theater among other fields, both for magazines and for advertisers. He was then drawn to abandoned towns and unused buildings in Japan before in 2007 setting out to chronicle a nuclear disaster for the first time with a trip to Ukraine, whose Chernobyl power plant suffered in 1986 what is still considered the world's worst nuclear accident.

In all, he has visited the site with permission from Ukrainian authorities six times to take pictures. Since 2013, meanwhile, he has visited Fukushima Daiichi and its environs, also with special permission, almost every month to chronicle the changes wrought by the disaster.

Nakasuji, who hails from Wakayama Prefecture, western Japan, feels his concern over the dangers of nuclear power is simply a natural reaction for someone living in a country as quake-prone as Japan.

His hometown facing the Pacific Ocean is in a region where a massive quake is predicted to occur in the future.

"If a nuclear-disaster like the Fukushima one happens in my hometown, my family and friends there would suffer and I might be crying over their ruined lives," Nakasuji said. 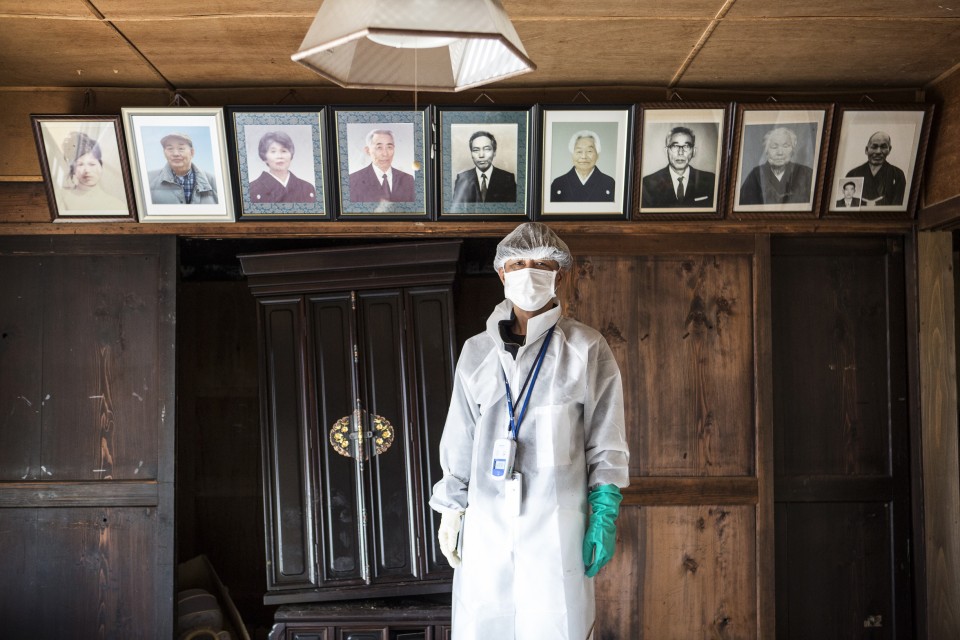 Sumio Konno, who lived in the town of Namie, Fukushima Prefecture, before the nuclear disaster in 2011, makes a visit to his parents' house in the radiation-contaminated town in December 2018. The framed photos in the house are of his ancestors. (Photo courtesy of Jun Nakasuji) (Kyodo)

"Japan has a number of nuclear power plants and I wonder why many people cannot sympathize with Fukushima residents," he said.

Aside from the ruined infrastructure in and around the Fukushima plant, Nakasuji has focused on the scarring of the landscape with bags of contaminated soil that in one poem he describes as having "rushed ashore like a black tsunami."

The soil, scooped up in decontamination work, amounts to some 14 million cubic meters, or enough to fill the Tokyo Dome baseball stadium 11 times over, according to the Environment Ministry.

Most of the soil has been moved to a 16-square-kilometer plot of land in the towns of Okuma and Futaba, which host the crippled plant. But while the site is meant to be temporary, Nakasuji said local farmers who rented land to the government for the facility assume it will become the final disposal site. 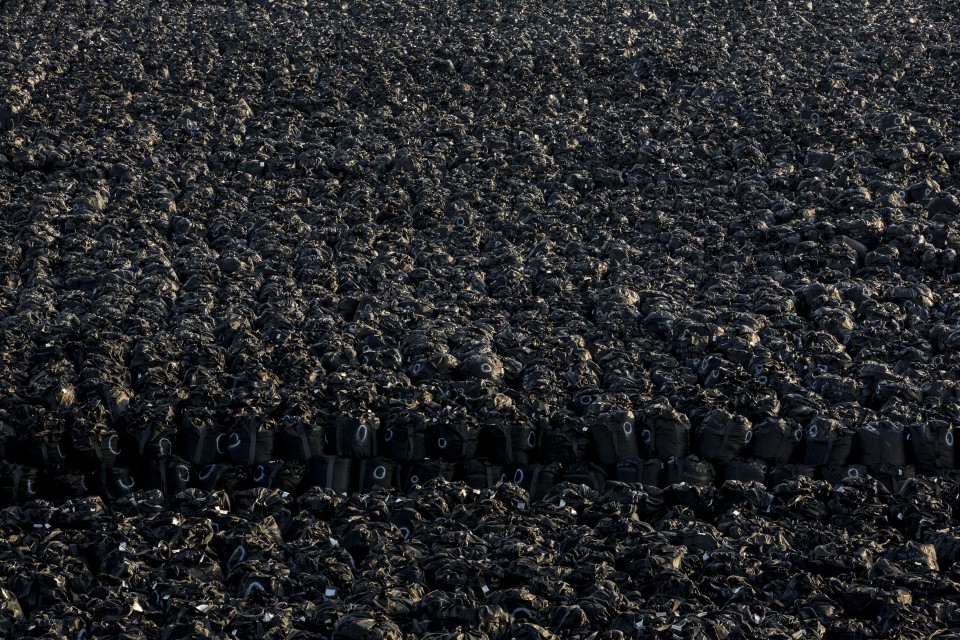 Millions of bags of contaminated soil, scooped up in the areas surrounding the crippled Fukushima Daiichi nuclear power plant, are heaped up on a beach in the town of Tomioka, Fukushima Prefecture, in May 2015. (Photo courtesy of Jun Nakasuji) (Kyodo)

"They are giving up a hope their land will be returned after 30 years" as the government has promised, he says.

In Chernobyl, too, he found the same postponing of solutions until far into the future.

Within months after the explosion, a large concrete encasement referred to as the "sarcophagus" was hastily constructed to seal off the No. 4 reactor that exploded at the Chernobyl plant.

But the structure deteriorated over decades, and with the nuclear contamination still yet to be cleared away, a new metal encasement with international funding was moved over the sarcophagus in 2016, with promises that it would be safe for 100 years. 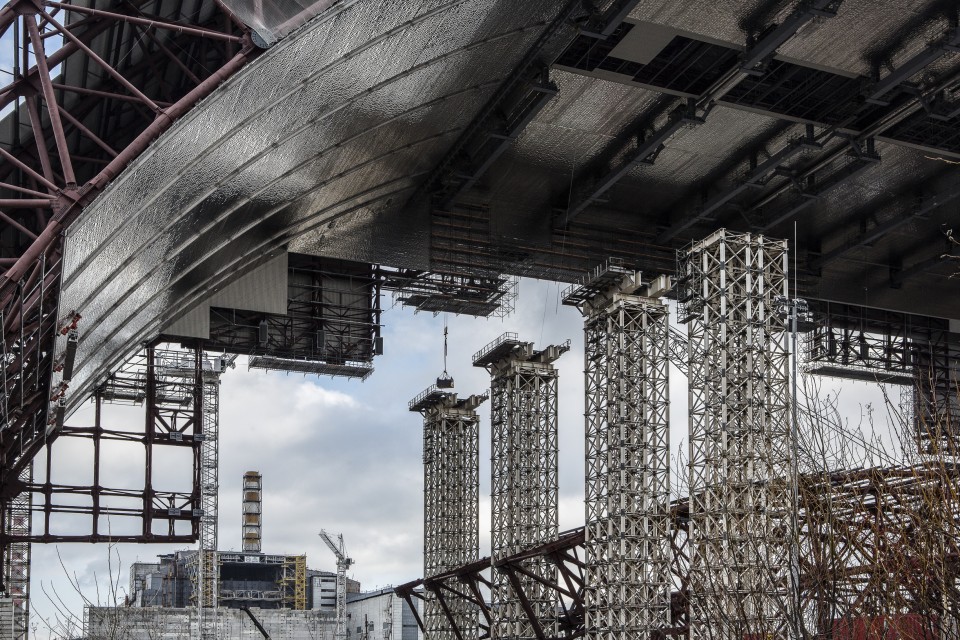 The concrete-encased No. 4 reactor (back) that exploded at the Chernobyl nuclear power plant in Ukraine in 1986 is seen in February 2014, before it is covered by a new metal encasement (front) under construction. (Photo courtesy of Jun Nakasuji) (Kyodo)

Nakasuji recalls asking an official what would happen to the nuclear fuel and the metal encasement if the fuel has not been removed in a century's time. The official was stuck for a reply, he said.

"'The only answer I can give is that I, and you too, will be in our graves 100 years later,'" Nakasuji quotes the official as saying.

The negative legacy of Fukushima is the responsibility of everyone in Japan, he says, for, as electricity users, it is as if they are hooked up to a drip coming from "the other side of the socket."

"We can hardly give up modern-day life with electricity. But I believe it is important to realize the problems inherent in the current lifestyle and consider how it should be changed and what step we should take," Nakasuji said, recommending setting up solar power panels at home and choosing to buy electricity generated by renewable energy sources as responsible steps.

Meanwhile, the dislocation in life, both around Chernobyl, where over 350,000 residents were ordered to evacuate and eventually told they could never return, and Fukushima has been profound. Many people in Fukushima had inherited their land, houses and farms from down the generations, fostering long-standing ties in their communities. But these were lost in the disaster.

"Local people have said 'We don't want money but want our homes back as they were,'" he said of people from a district in Fukushima he has spoken to who have filed a lawsuit for damages caused by the disaster. Instead, they want to let the state and the utility understand the preciousness of their lost life.

"I always hoped to take beautiful pictures of their homes because I didn't want to make them just specimens (for the photo book). I wanted to show respect to their homes in my photos," he said.

For more information of Nakasuji's book (only in Japanese), visit the publisher's website at https://www.shogakukan.co.jp/books/09682355. Also visit https://suzyj1966.wixsite.com/moyai