The 38-year-old failed to score last season at J2 Tokyo Verdy but has now scored five goals in five games after returning to the J1 with his first club Cerezo. 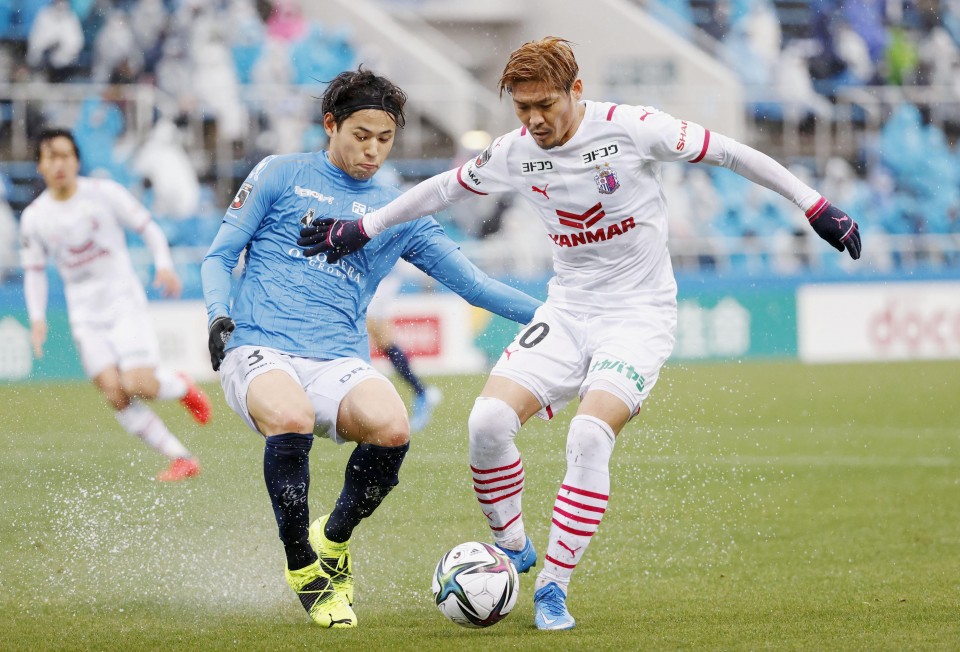 Cerezo Osaka's Yoshito Okubo (R) vies for the ball with Yutaro Hakamada of Yokohama FC in a J-League first-division match at Nippatsu Mitsuzawa Stadium, in Yokohama on March 13, 2021. (Kyodo)

It has been a remarkable turn of fortune for the former Mallorca and Wolfsburg striker. The only player to lead the league in scoring in three straight seasons, from 2013 to 2015 at Kawasaki Frontale, Okubo entered the season with just six J1 goals since 2018.

After torrential rain delayed the game's start by two hours at Nippatsu Mitsuzawa Stadium, Yuta Toyokawa's 25th-minute back-header put the visitors in front when the Yokohama FC defense failed to cope with a deflected cross.

Germain Ryo's effort inside the box took a touch off a Cerezo defender as the home side drew level 10 minutes after the break, but the celebration was short-lived as Okubo scrambled in Cerezo's second five minutes later.

Okubo's header off Riku Matsuda's cross had just enough on it to put Cerezo in front.

Two substitutes sent on by Brazilian manager Levir Culpi, back at Cerezo for his fourth stint at the club, combined to seal the tie on a counter as Toshiyuki Takagi set up Mutsuki Kato to tap home in the 87th minute.

Takagi added the fourth in the game's final act, finding the net after hitting the top left corner of the frame with a sublime effort.

"Each player showed their worth to the team, even if they were coming off the bench, and played with confidence," said Culpi, whose team now have three wins and two defeats. "They've shown the kind of attitude we want as a team."

Yokohama FC's plight continues, on the other hand, with four defeats from four games seeing them prop up the 20-club table. The bottom four sides will be relegated to the J2 at the end of this season.

Elsewhere, reigning champions Kawasaki Frontale made it five wins out of five after Akihiro Ienaga scored the second-half winner set up by ever-impressive Kaoru Mitoma.

Sanfrecce Hiroshima remain unbeaten with a win and three draws after they were held to a 1-1 away draw at Kashima Antlers. Nineteen-year-old Ryotaro Araki scored for the third straight game for the home side.

Shonan Bellmare earned their first win, beating fellow strugglers Vegalta Sendai 3-1 at home, while Avispa Fukuoka also secured their first three points after coming from behind to beat Tokushima Vortis 2-1 away in the battle of promoted