The government said Tuesday it will hold a memorial service next week to mark the 10th anniversary of the devastating earthquake and tsunami that struck northeastern Japan but that it will be scaled back due to the coronavirus pandemic.

The state-sponsored ceremony will be held on March 11 at the National Theatre in Tokyo following a cancellation last year due to the virus situation in Japan, according to Chief Cabinet Secretary Katsunobu Kato. 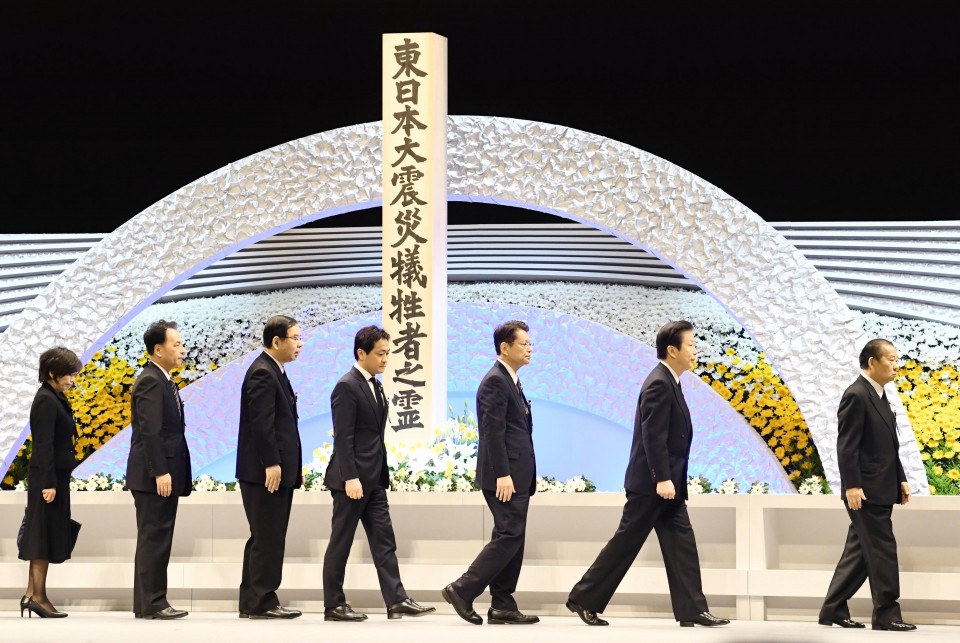 Political party leaders are pictured after laying flowers at a government-sponsored memorial service  in Tokyo on March 11, 2019, the eighth anniversary of the earthquake-tsunami disaster in northeastern Japan. (Kyodo)

However, Kato said the event will be the last in its current form and that future memorial events will depend on the situation at the time.

Emperor Naruhito and his wife Empress Masako are scheduled to attend the afternoon event. The emperor is expected to give a speech, the top government spokesman said.

Kato added measures will be taken to prevent the spread of the virus, and the public will not be allowed to offer flowers at the venue.

Prime Minister Yoshihide Suga and guests will observe a moment of silence at 2:46 p.m., when the huge quake shook eastern and northeastern Japan a decade ago, triggering tsunami as well as a nuclear crisis at the Fukushima Daiichi plant and killing more than 15,000 people.

The ceremony had been held every year since 2012, with around 940 people attending the event in 2019. Former Prime Minister Shinzo Abe offered flowers and delivered an address at his office last year following the decision to cancel the service.