Three goals within four second-half minutes paved the way for Kawasaki Frontale's 5-0 mauling of Urawa Reds in the J-League first division on Sunday, the defending champions staying top of the table with six wins from seven games.

Nagoya Grampus were only a point behind with a game in hand after Sho Inagaki's 59th-minute effort from the edge of the box secured them a 1-0 win at 10-men Kashima Antlers and continued their best start to a campaign with six straight wins -- four by 1-0. 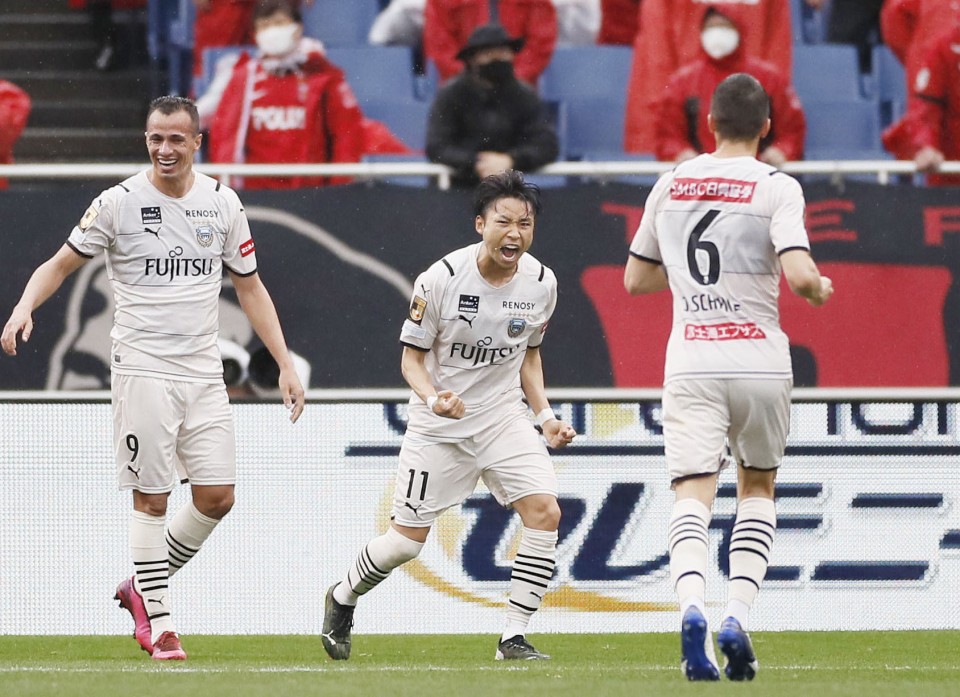 Kawasaki Frontale's Yu Kobayashi (C) celebrates after scoring the opener in their 5-0 win against Urawa Reds in a J-League match at Saitama Stadium on March 21, 2021. (Kyodo)

Kawasaki, who dropped their first points on Wednesday on a late equalizer at Vissel Kobe, went ahead at Saitama Stadium through a Yu Kobayashi header in the 42nd minute from a cross provided by right-back and new national team member Miki Yamane.

Kobayashi turned provider in the 49th minute as he chipped in a cross from the right for Leandro Damiao, who controlled the ball with his chest before scoring on a superb bicycle kick.

New signing Joao Schmidt was the architect two minutes later, threading through a long, perfectly weighted ball on the floor for galloping left-back Reo Hatate, who slotted through the legs of Urawa keeper Shusaku Nishikawa.

Two minutes later, the stunned Urawa defense was breached again, Tatsuya Hasegawa's cross from the left nodded back across the goal by Damiao for Kobayashi to chest home.

Yasuto Wakizaka drilled home from outside the box in the 67th minute to put the icing on the cake, with the result leaving the home side with one win after six games under new manager Ricardo Rodriguez.

"Miki gave me a wonderful ball (for the first goal). I knew he would pick that spot after getting the ball and I'm thankful to him," said Kobayashi. "We were determined not to be second-best mentally, and have focused on running more and wanting to win more."

Elsewhere, newcomers Tokushima Vortis won at home in the J1 for the first time in club history after Taisei Miyashiro netted the 73rd-minute winner in a 2-1 victory over Yokohama FC, who have lost all six of their games.

Tokushima finished bottom in their only previous J1 campaign in 2014 when all three of their wins came away from home. Spanish manager Dani Poyatos has yet to take charge this season having been kept out of Japan by travel restrictions amid the coronavirus pandemic.

Unbeaten Sagan Tosu kept their sixth straight clean sheet since the start of the season but were held 0-0 at home by promoted Avispa Fukuoka. They remain third, four points behind second-place Nagoya.

FC Tokyo came from behind at home to beat struggling Vegalta Sendai 2-1, while Cerezo Osaka were held 0-0 at Shonan Bellmare.

Shimizu S-Pulse won 2-1 away at Kashiwa Reysol, the home side suffering their fourth straight defeat.