Prime Minister Yoshihide Suga said Wednesday the government plans to end the COVID-19 state of emergency covering the Tokyo metropolitan area on Sunday as planned, having deemed another extension unnecessary as infections have declined from their peak and the strain on hospitals has eased.

"I will make a final decision after hearing the opinion of the panel of experts" in infectious disease and other fields, Suga told reporters after discussing the move with members of his Cabinet including health minister Norihisa Tamura and Yasutoshi Nishimura, minister in charge of coronavirus response. 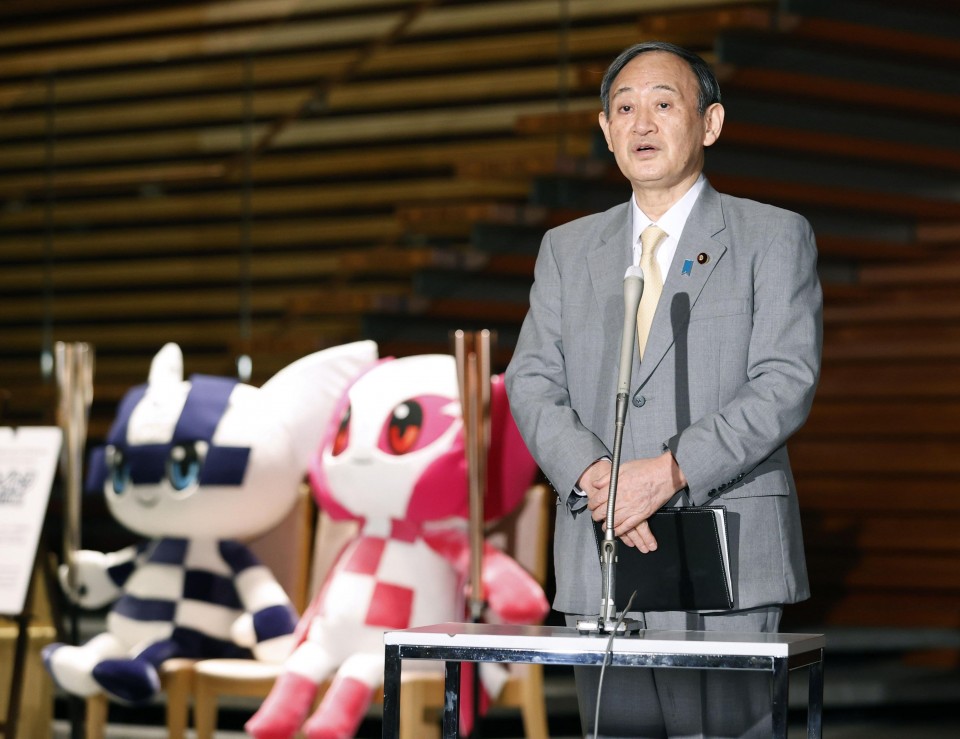 Japanese Prime Minister Yoshihide Suga meets the press in Tokyo on March 17, 2021, unveiling a plan to lift the COVID-19 state of emergency covering the Tokyo metropolitan area as scheduled on March 17. (Kyodo) ==Kyodo

Tokyo, Kanagawa, Chiba and Saitama prefectures have been under the emergency since early January, with people urged to refrain from nonessential outings, and restaurants and bars told to close by 8 p.m.

Businesses have been encouraged to adopt remote working and attendance at large-scale events such as concerts and sports games has been capped at 5,000.

Infections have fallen since the restrictions were imposed, but the pace of decline has slowed and even rebounded in some prefectures. Tokyo reported on Wednesday 409 new cases, the most since Feb. 18, bringing the cumulative total to 116,293.

The governors of the four prefectures had been split on whether the state of emergency should be lifted or another extension was in order. Chiba Gov. Kensaku Morita on Wednesday voiced support for Suga's decision, while Tokyo Gov. Yuriko Koike stressed the need for steps to prevent a resurgence in the coronavirus, including expanded testing.

In a virtual meeting in the evening, they agreed to push back the closing time for eateries to 9 p.m. after the state of emergency is lifted, effective until the end of March.

If the expert panel approves the exit from the state of emergency on Thursday, the prime minister is slated to appear in parliament to explain the decision before making it official at a meeting of the government's COVID-19 task force in the evening.

The decision is based on improvements in six indicators the government uses to gauge the severity of the situation, including the weekly number of infections per 100,000 people and the percentage of hospital beds currently available for COVID-19 patients.

Suga said the government would take measures to prevent a resurgence in the coronavirus, without providing specifics.

At a press conference later in the day, he is set to announce new measures aimed at supporting restaurants and bars hit hard by the pandemic, bolstering the health care system, preventing the spread of more contagious coronavirus variants and stepping up testing and vaccinations, according to government sources.

The exit from the state of emergency comes as Suga seeks to buoy the pandemic-stricken economy and restore confidence in his administration following a series of scandals at the communications ministry, which he once headed. It also comes less than five months before the postponed Tokyo Olympics are due to begin.

The prime minister declared a one-month emergency in the Tokyo metropolitan area on Jan. 7 amid a surge in infections, later expanding it to a total of 11 prefectures and extending it for most of them by another month, to March 7. It was further extended by two weeks to Sunday for the capital and its neighbors.