With a combined user base of about 150 million in Japan, the merger of Z Holdings, a SoftBank Group Corp. subsidiary, and Line will make it one of the biggest information technology companies in the country. 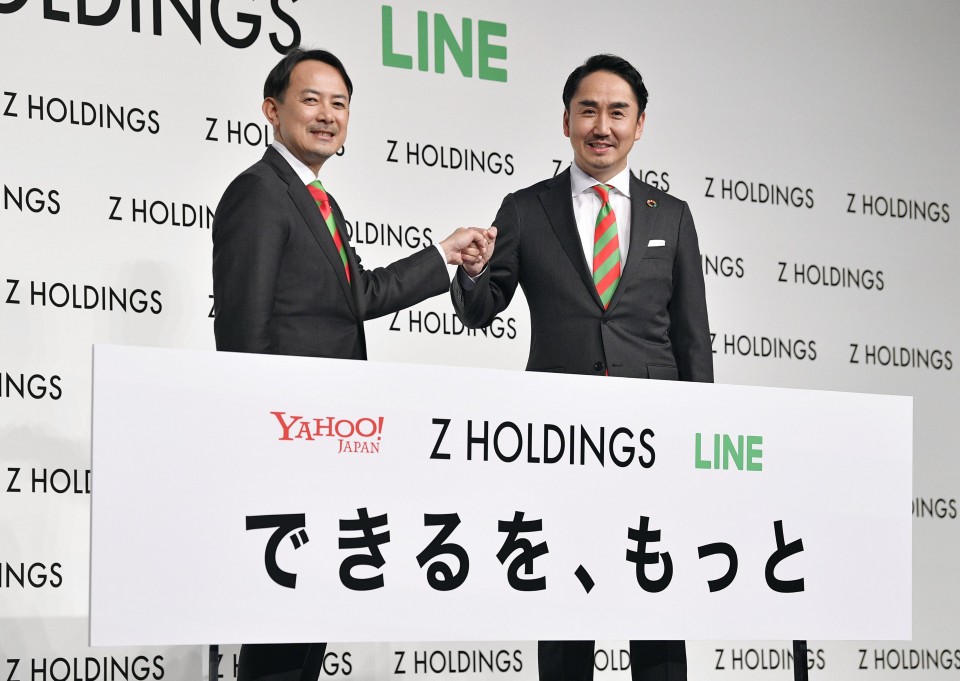 "We would like to launch a global smartphone app" in the future to expand online services worldwide with the help of global tech firms in which SoftBank Group's nearly $100 billion Vision Fund has invested, said Takeshi Idezawa, Z Holdings co-CEO and former Line president, at a press conference.

Kentaro Kawabe, the other Z Holdings co-CEO said, "We can offer a wider range of services, such as search engine, e-commerce and online financial operations, than those provided by GAFA -- Google LLC, Apple Inc., Facebook Inc. and Amazon.com Inc. -- with our group's total power."

The surviving entity is Z Holdings, under which Yahoo Japan and Line operate their respective businesses.

The integrated company said it is targeting sales of 2 trillion yen ($19 billion) in fiscal 2023, compared with the two companies' combined sales of 1.28 trillion yen in fiscal 2019, and aiming to become the largest e-commerce operator in Japan in the first half of the 2020s.

The company plans to invest 500 billion yen in artificial intelligence technologies and employ 5,000 IT engineers in the coming five years to strengthen its online services, according to Kawabe.

The company said it has started internal talks to integrate Line's "Line Pay" smartphone payment services into "PayPay," operated by a SoftBank group company, by April 2022.

Line Pay services, however, will remain in overseas markets as it has gained a substantial number of users in some countries, it said.

In Japan, Idezawa said the company aims to launch online medical services, including prescription and delivery of drugs, through its Line app by March next year.

Yahoo Japan currently has 68 million monthly users of its smartphone app, while Line has 167 million users in Japan, Taiwan, Thailand and Indonesia.

Under the new structure, SoftBank Corp., the wireless carrier unit of SoftBank Group, and Line parent Naver Corp. of South Korea hold 50 percent stakes in a new company named A Holdings Corp., which holds a majority stake in Z Holdings.