While the outbreak of the novel coronavirus has seen tourism all but grind to a halt in the city of Aizuwakamatsu, Fukushima Prefecture, individuals and organizations continue their work to preserve the broader region’s cultural landscape.

In February Hiroyuki Tsukamoto gave a demonstration of katana-togi sword polishing at the Aizu Hanko Nisshin-kan, a former school for children of the region’s ruling Aizu clan samurai established in Aizuwakamatsu City during the Edo Period.

Despite the near freezing temperatures the young togishi, or master of sword polishing, seemed oblivious to his bare feet getting wet from the cold water dripping off the blade in front of him, instead appearing fully concentrated on an early stage of the polishing process that uses a binsuido grinding stone to achieve a polish which reflects the era in which the sword was made. 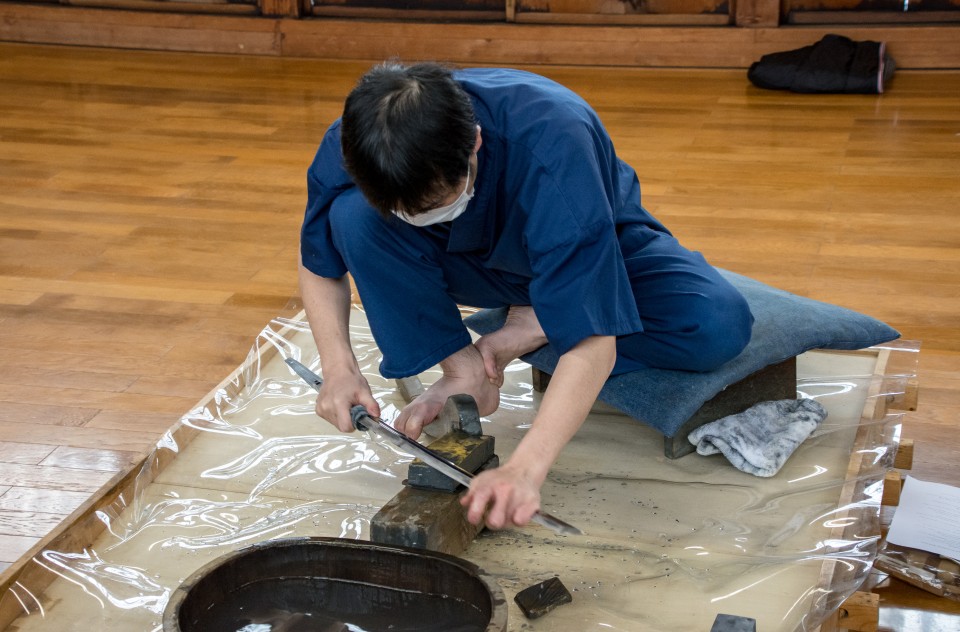 Achieving an era-appropriate finish is a key part of sword polishing, according to the 34-year-old.  Potential clients have tested Tsukamoto on his knowledge first to see whether or not they want to give him their custom.  An eye for a blade and the human touch to achieve the desired polish is the only way to go though -- machines would polish away the key features of the blade, according to Tsukamoto.

"I need to be able to recognize the finish of swords from every region of Japan, across the eras," he said, apparently undaunted by the prospect, but then swords are in the family blood.  Tsukamoto was taught katana-togi by his father (a togishi himself) before sharpening his skills under the tutelage of an expert.  His grandfather was a katana-kaji (swordsmith), his older brother a sayashi, or master of making sheaths for swords.

"Most young people aren’t aware that such work exists.  There are some who are interested though, but with no vocational school in which to learn they don’t know how to get started," Tsukamoto said of a profession which, by his quick calculation, he is one of only two full-time professional practitioners in Fukushima Prefecture.

It’s a hard world to break into though.  Tsukamoto suggested investing in a sword of one's own to polish and that way showcase one's skills.  When blades can cost upwards of 600,000 yen though, it’s no light commitment.

With no clear way to advertise his work -- sword polishers can’t engrave their signature mark into the blade as might a sword-maker, for instance -- word-of-mouth from a satisfied and knowledgeable customer is key to increasing business for Tsukamoto.

Not that there appears to be any shortage of swords lying around.  The Aizu region is often thought of as having been a final stronghold of samurai culture in the mid-to-late 19th century when Japan transitioned from the feudal rule of the shogunate to practical imperial rule during the Meiji Restoration.

When the ruling Aizu clan of the then Aizu Domain surrendered in November 1868 to imperial forces after a siege of Tsuruga Castle in Aizuwakamatsu City during the Boshin War, Japan underwent a symbolic swapping of the samurai and their swords for politicians and soldiers bearing firearms.

Along with sword-makers and knowledgeable collectors Tsukamoto lists among his main clients people who just happened to find an old sword gathering dust in the attic.  Between his client list and a region littered with abandoned samurai swords then, he's a busy man and customers may have to wait up to six months for their polished order.

Tsukamoto had anticipated a slow down due to the outbreak of the novel coronavirus but there appears to have been no such effect with virus restrictions leaving people with time spare to concentrate on their swords, he speculated.  Business as usual for the togishi then, whose enthusiasm for his profession appears unbound, and resistant to the cold.

"It’s so much fun.  Even though there are times when my back is aching and I wonder, "What am I doing?" I envisage the final look of the sword and then to realize that, little by little, is really satisfying," he said. 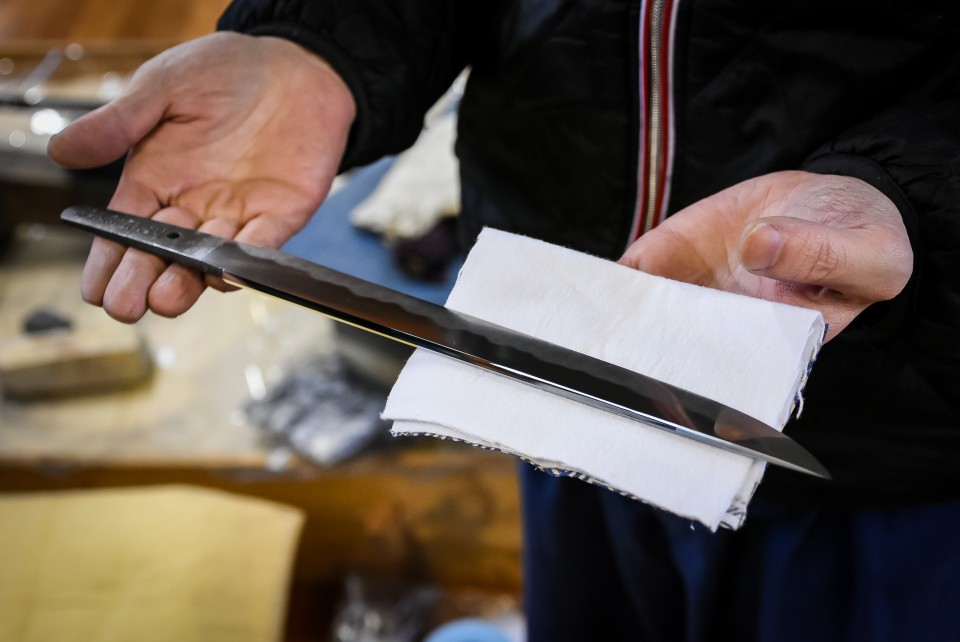 "There is no instruction manual or textbook for this.  Students have to learn through experience," said Sato Takamitsu, giving a demonstration of the techniques he employs for the maintenance of the kayabuki thatched roofing that is a feature of his hometown of Ouchijuku.

Located in the mountains southwest of Aizuwakamatsu City, Ouchijuku, a former post town during the Edo Period, is a popular regional tourist destination thanks in part to its well-preserved townscape topped by distinctive kayabuki thatched roofing which has been preserved and maintained for around 400 years.

The town was designated as one of the Preservation Districts for Groups of Traditional Buildings by the Japanese government in 1981.  In 2020 the traditional skills, techniques and knowledge employed by craftspersons to restore and maintain kayabuki roofing across Japan were inscribed on UNESCO’s Representative List of the Intangible Cultural Heritage of Humanity.

Takamitsu, who was born and bred in Ouchijuku, gave the demonstration of his heritage-listed skills in a classroom of the town’s former elementary school which closed over a decade ago.

With chalkboards and dog-eared color-paper-and-glue displays still in place on the walls, and floor space largely buried underneath bunches of the dried pampas grass used for the kayabuki roofing, the setting perhaps belies the technique’s recently acquired status, as much as it might highlight the need behind it -- more of the technically proficient to keep it alive. 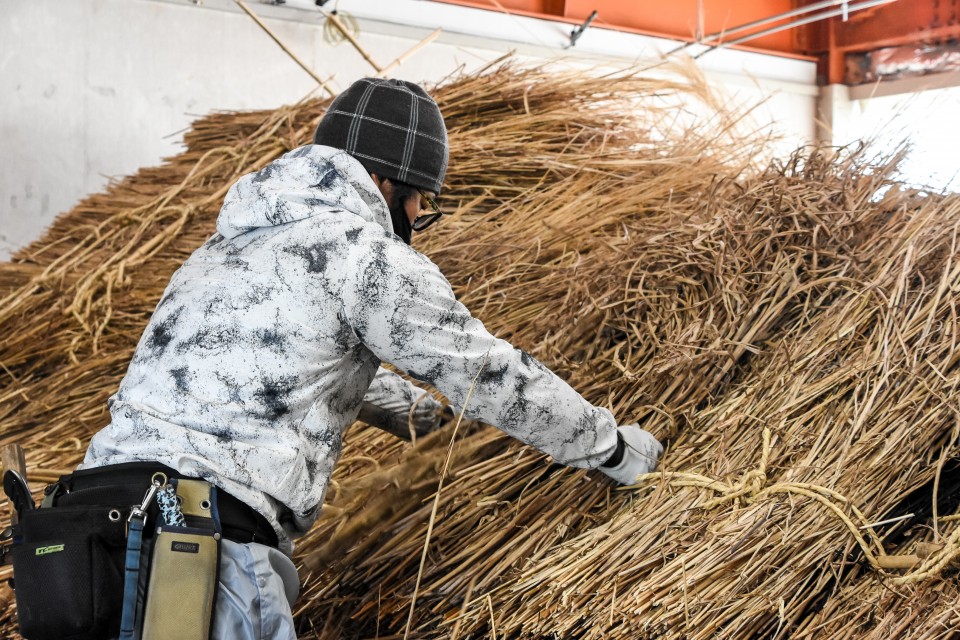 As the head of a local association formed to preserve the traditional kayabuki roofing methods, Takamitsu teaches the techniques he learned in Ouchijuku to younger generations, during a monthly class held at the former elementary school.

The Association for the Preservation of Traditional Roof Thatching Methods has 13 members, according to Takamitsu.  It’s a number that might sound diminutive at first but with a population of just over 200, including around 20 children up to junior high school age, Ouchijuku’s statistics provide some context.

"Now it’s time for me to pass on these skills to the next generation," Takamitsu said.

"We need to do this because the people who have these skills are getting older and fewer.  Kayabuki is a selling point for Ouchijuku and we need to look after it."

Seven to eight students turn up for class each month where they learn about techniques which, while broadly speaking are common to the kayabuki roofing found in other parts of Japan, have some characteristics unique to the town.  In particular, the use of natural materials found in the Aizu region, primarily susuki pampas grass.

"It’s not an ideal number (of students) but the people we are teaching now, hopefully they will teach the next generation, and not just here in Ouchijuku but in other regions, too," Takamitsu said.

"People come here to see the roofs of this post town.  I was born and bred here.  I want to take care of this landscape and this region." 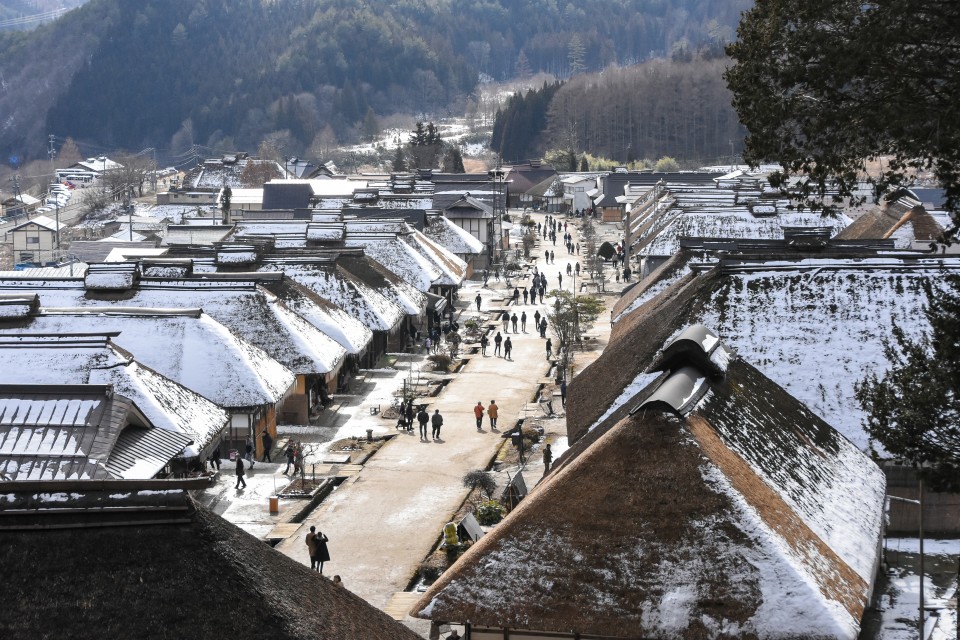 Plans to help preserve and promote a food-based tradition in the Aizu region recently got underway in a promotion that local organizations are hoping will harness the region’s wealth of fermented products.

Spearheaded by the tourism association of hot spring town Higashiyama Onsen, east of downtown Aizuwakamatsu City, hakko tourism, or “fermentation tourism,” aims to promote products such as the sweet, fermented rice drink amazake, the rice wine mirin, and shoyu (Japanese soy sauces made in part from fermented soy beans) among others, through collaborations with local ryokan and hotels as well as tours of the local facilities where they are produced.

The plans are part of a larger destination campaign to promote the wider Tohoku region following the 10th anniversary of the Great East Japan Earthquake in March 2011.  The Tohoku Destination Campaign will bring together the municipal governments of the six Tohoku prefectures as well as member companies of the Japan Railways Group, among other entities, for the campaign which is set to run from April through September.

"We wanted to showcase fermented products as part of the destination campaign representing Fukushima," said Shigemi Hiraga, vice-president of the Higashiyama Tourism Association.

"All over the Tohoku region you can find a great variety of fermented products.  These products reflect the culture and landscape of the regions in which they are produced and make for a unique aspect of tourism."

The early focus of this fermentation tourism will be on amazake, a drink which has seen a significant boom over the last decade in Japan with an increasingly health-conscious public drawn to its nutritional value.

Through the initiative organizers plan to welcome guests staying at local accommodation facilities with a complementary amazake drink.  Apparently aware that a free drink can only go so far though, organizers are also seeking to strengthen the initiative by connecting with local sake breweries.

Used in the making of amazake is sake kasu, or sake lee, a by-product of the kind of traditional sake brewing techniques which are still employed by breweries in the Aizu region.

"This is where the best sake in Japan is brewed. In the past we have done promotions using sake but this time we wanted to try a new approach and focus on sake kasu, a by-product of the production of this delicious sake," Hiraga said.

Organizers plan to purchase sake kasu from breweries based in Aizuwakamatsu and use this to make amazake at a workshop in the city.  Tours for visitors to see the brewing process and meet the people behind it are also part of plans for the initiative.

"Using sake kasu in this way is to protect a traditional culture as well as the regions in which people are making it," Hiraga said.

"The natural landscape is important and so too is the cultural landscape.  The traditional buildings of the sake brewers, miso and shoyu producers contribute to these local townscapes and landscapes.  I think the flavors of these establishments can be a pillar for tourism in the area."

With the outbreak of the novel coronavirus visitors to the city of Aizuwakamatsu, prior to the launch of the government’s Go To Travel campaign in July 2020, dropped by around 80 percent compared to the previous year.  The introduction of the travel campaign saw numbers pick up to reduce the drop to around 50 percent during the campaign.

"We have Tsuruga Castle and many other historical attractions here, but as well as the tourist attractions and accommodation facilities, there are the restaurants, the traders that support these businesses, the farmers.  The tourism industry here has a very wide reach," said Ryoji Nihei of the city’s tourism and commerce department.

"Tourist numbers decreased dramatically and it’s had a huge effect on the city," he said of the pandemic.

With tourism being one of the largest industries for a city known for its samurai heritage officials have been supporting a revival of its fortunes, including with subsidies for travel agencies selling tours to the region, while individuals and other organizations continue their work to preserve the cultural landscape ready for tourism’s return.