The Japanese government's advisory panel on securing a stable line of imperial succession held its first meeting on Tuesday, with discussions over the coming months set to focus on whether the country should break with tradition and allow female members of the emperor's family to ascend the throne.

The six-member panel will hear from experts in various fields and is aiming to reach a conclusion by this fall, at which point it will present its findings to parliament. 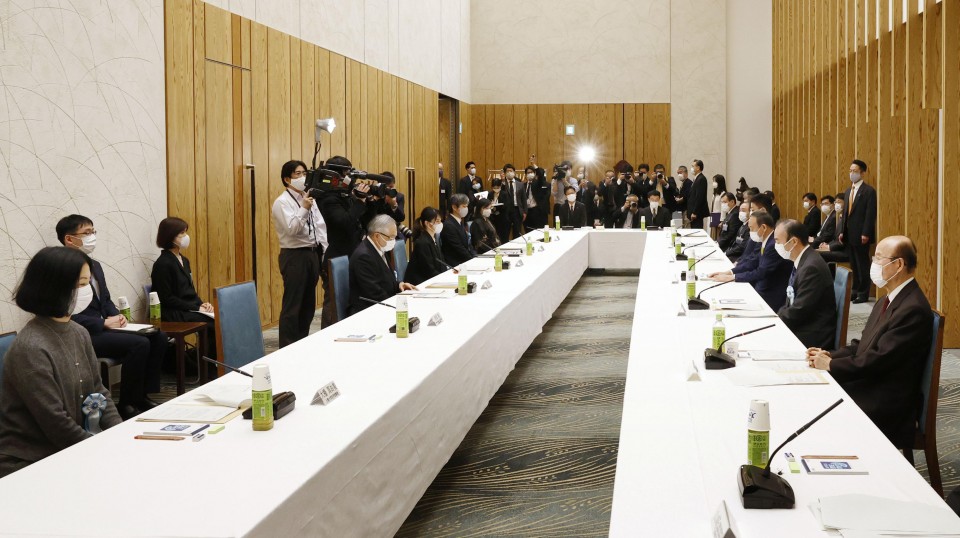 The Japanese government's advisory panel on securing a stable line of imperial succession holds its first meeting in Tokyo on March 23, 2021. (Kyodo)

"The topic you are discussing is an important issue concerning the nation's basis," Prime Minister Yoshihide Suga said at the start of the meeting. "I hope you will hear a range of views and sort them in a way that is easy to understand."

The panel was formed amid mounting concern over the dwindling number of imperial family members and what that means for the future of the Chrysanthemum Throne.

The panel agreed to ask experts about 10 key points including their positions on including female or matrilineal imperial members in the line of succession, the current rule requiring women marrying commoners to abandon their imperial status, and adoption of male heirs from former branches of the imperial family.

According to a government official, a total of about 20 experts will be called upon to give their views.

The Japanese public is increasingly in favor of allowing a woman to ascend the throne, with 85 percent of respondents in a Kyodo News poll conducted last spring supporting the move.

But conservatives in the ruling Liberal Democratic Party are reluctant to make significant changes to rules on imperial succession.

Japan's imperial system dates back to the fifth century and there have been eight female monarchs between the sixth and 18th centuries. But none of them was from a female line of descent. The current law went into force in 1947.

The panel was established in response to a nonbinding resolution by the parliament in 2017 calling on the government to step up debate after then Emperor Akihito expressed his desire to abdicate due to old age.

Former Keio University President Atsushi Seike was chosen to chair the panel by the other members, which include Tetsuro Tomita, chairman of East Japan Railway Co., and Mayumi Ohashi, a law professor at Sophia University.