In a book by an Okinawan women's civic group documenting sex crimes by U.S. soldiers in Japan, a 9-month-old infant girl is listed as the youngest rape victim.

Among a litany of cases the group began compiling after the rape of an Okinawan elementary schoolgirl by three U.S. soldiers in 1995, the 1949 crime by a U.S. serviceman who was an acquaintance of the baby's mother stands out as arguably the most heinous and unimaginable -- the baby reportedly died soon afterward.

But the acts of sexual violence by U.S. servicemen are likely to be even more extensive than research has so far uncovered, according to the group, called Okinawan Women Act Against Military Violence.

"We need to uncover how much pain has been caused to people because of the military stationed here," said Suzuyo Takazato, 80, co-chair of the group. It has published a chronology titled, "Postwar U.S. Military Crimes Against Women in Okinawa." 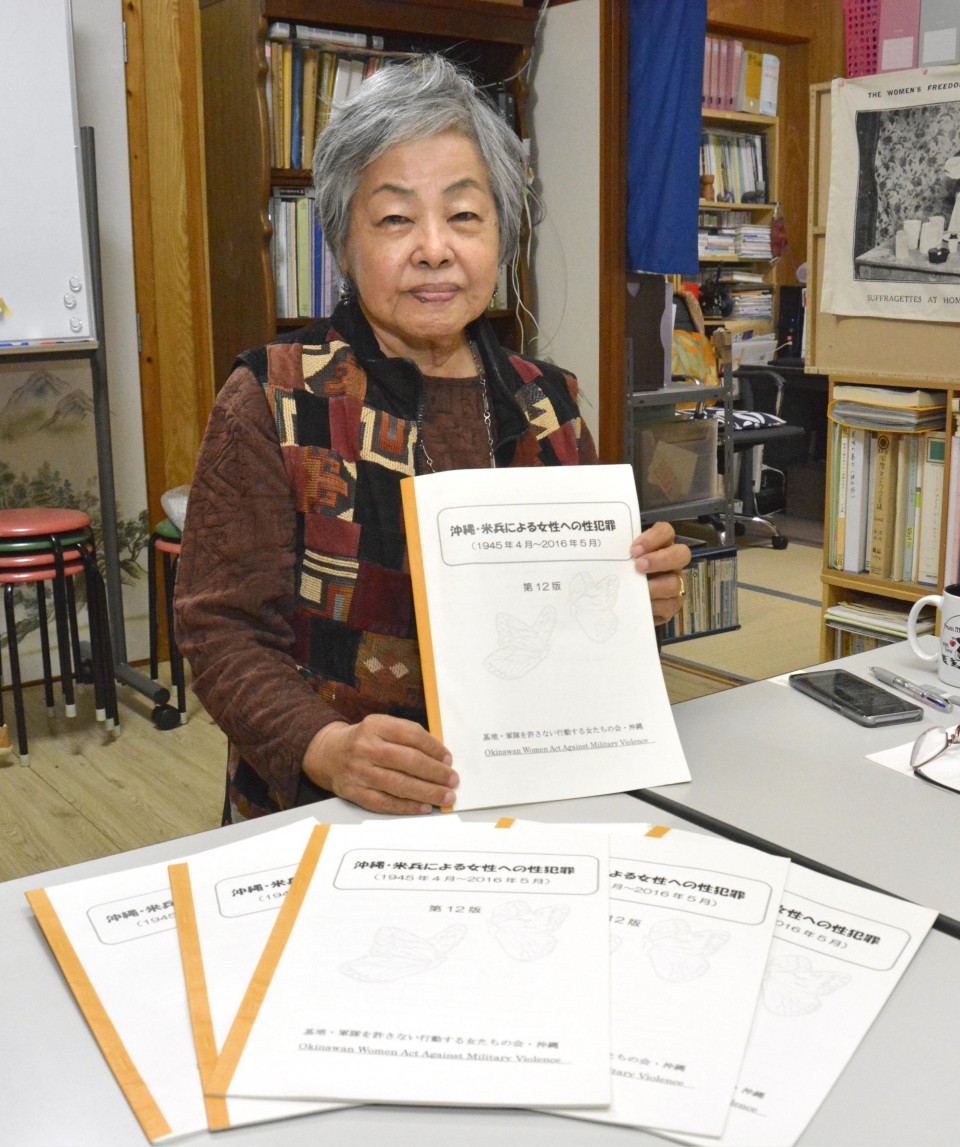 According to Harumi Miyagi, a researcher of Okinawan women's history working together with Takazato on the project, the baby, who was taken away by the U.S. serviceman, "clearly" had been sexually assaulted and died after she was returned to the mother.

Other cases include a teenage girl who suffered a mental breakdown after being raped by a U.S soldier in front of her father and older brother in the mid-1950s, a high school girl who was raped in a park by three U.S. servicemen on her way home from school in 1984 and a 20-year-old woman whose body was discovered after she had been raped and murdered by a U.S. civilian-military employee in 2016.

The booklet (also in English), which was six pages when it was first published in 1996, is now 26 pages long since the most recent publication in 2016 -- a poignant history of the suffering women have endured as a sacrifice for Japan's security in Okinawa, which bears the brunt of hosting U.S. military bases in the country.

According to government documents, newspaper articles, and testimonies compiled by the group, such atrocities have occurred since immediately after U.S. soldiers landed to fight in the Battle of Okinawa in April 1945 during World War II.

A public outcry was sparked over the September 1995 rape of a Japanese schoolgirl, leading to a massive protest to denounce the U.S. troops stationed in Okinawa, attended by more than 85,000 people in a park in Ginowan on Oct. 21, 1995. The ripple effects of outrage were felt across Japan.

The girl's case led to a review of the U.S.-Japan Status of Forces Agreement and a request to reorganize and reduce the number of bases, while the problem ignited a political firestorm between the two countries over the delay in handing over the suspects to Japanese authorities. But it was a call to action for Takazato.

"The perspective one can take on the bases can completely differ depending on who is looking at them and from what angle. Looking at the bases from the point of view of the sex crimes committed by U.S. soldiers clearly shows me one essence of the military," Takazato said around the time of the 1995 incident.

Takazato, who lives in the capital of Naha and previously worked as a women's counselor, said she was questioned in the wake of the girl's rape by the media inside and outside Japan about the number of sex crimes committed over the decades by U.S. soldiers but had no answers.

Although there have been arrests made since the southernmost prefecture of Okinawa was returned to Japan in 1972, Takazato said that based on her experience as a women's counselor, she believes scores of cases have occurred without ever being prosecuted.

That is when she started to comb through newspaper articles and books, arranging the content of U.S. military rape cases she found in chronological order to make a booklet.

In February 1996, with the completed first edition of the booklet in hand, she visited the United States with Okinawan women to appeal to the American public and was met with astonishment and tears from some people who said they had "no idea" of the reality.

An article published in Time magazine on Nov. 28, 1949, entitled, "Okinawa: Forgotten Island," which is cited in the booklet, called Okinawa during the U.S. occupation "a dumping ground for Army misfits and rejects..." The article adds: "In the six months ending last September, U.S. soldiers committed an appalling number of crimes -- 29 murders, 18 rape cases, 16 robberies, 33 assaults." 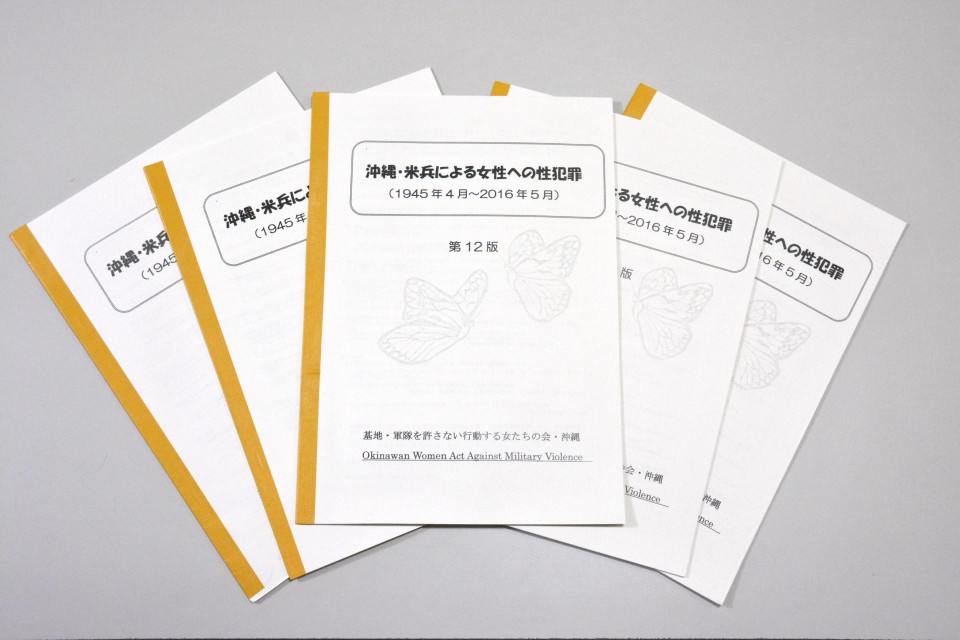 In current times, some critics have suggested that the incidence rate of sex crimes is much higher for citizens of the prefecture than for U.S. military personnel in Okinawa. Takazato, however, believes the real figure for U.S. servicemen is likely much higher than official figures suggest, partly because she believes women have been afraid to come forward.

As recently as February this year, a U.S. Marine Corps member was arrested in Okinawa for allegedly kissing a woman by force and pulling off her underwear, and, as the group continues to monitor sex crimes by U.S. servicemen, it is scheduled to publish a 13th edition of the booklet this year.

"With the continued stationing of soldiers who commit violence, women's human rights are repeatedly being violated. The military bases issue is a human rights issue," Takazato emphasized, calling for the withdrawal of U.S. soldiers from Okinawa.

Some young women who were raped and found out they were pregnant afterward had abortions, while others, unable to have an abortion, gave birth to children who were eventually put up for adoption.

After learning of the chronology, there was even a case of a woman who contacted the group to say she had been sexually assaulted by a U.S. serviceman while still an elementary school student. "I want you also to record my testimony," she was quoted as saying.

Takazato and her group have only uncovered the tip of the iceberg, she says, adding, "Countless women are living in pain, suffering, and fear who have not been able to tell anyone."

The group's mission is "shedding light on the existence of women who have been forced into silence and creating a society where they feel they can speak out," Takazato said.