Grand champion Hakuho, fighting for the first time since July 30 due to injury and illness, opened the Spring Grand Sumo Tournament with a win on Sunday.

Hakuho, who had endoscopic surgery on his right knee in August and tested positive for the coronavirus in January, resumed his bid for a 45th career championship three days after turning 36. The victory came over January's champion, komusubi Daieisho. 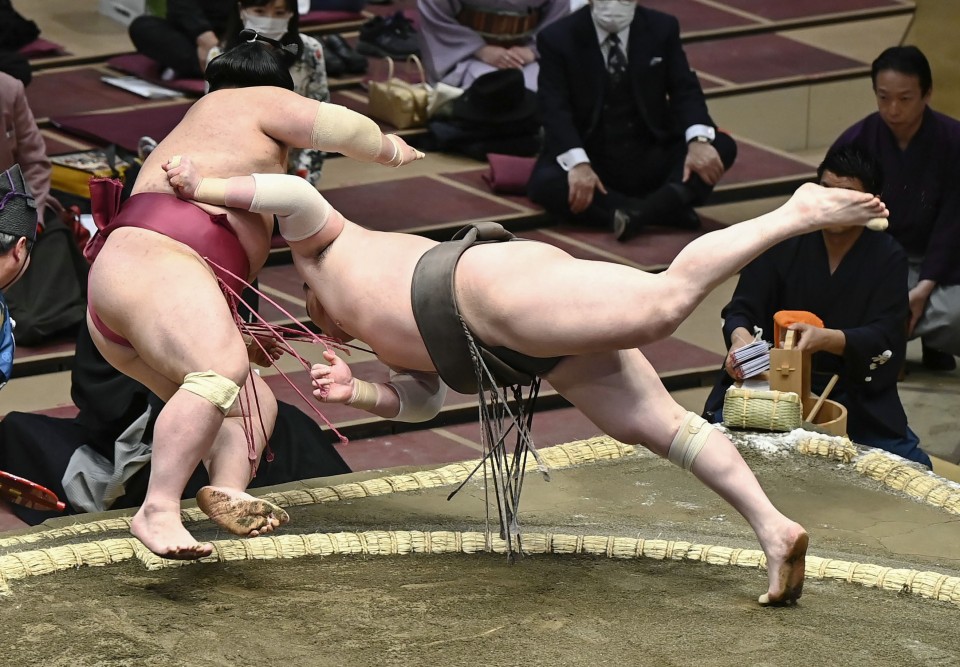 Yokozuna Hakuho (R) drives komusubi Daieisho from the ring to win on the opening day of the Spring Grand Sumo Tournament at Tokyo's Ryogoku Kokugikan on March 14, 2021. (Kyodo)

The yokozuna went on the offensive from the jump, driving Daieisho back to the straw. The komusubi tried to plant his right foot and pivot backward on his left to throw Hakuho out, only to be ruled to have stepped out first.

With both wrestlers flying out of the ring at nearly the same time, a review appeared in order, but none of the judges called for one, bringing the first of 15 days of competition at Tokyo's Ryogoku Kokugikan to a close.

Sekiwake Terunofuji, also in the spotlight as he pursues the 10-plus wins he'll need for promotion to ozeki for the first time since September 2017, opened with a winning left-handed underarm throw of No. 2 maegashira Hokutofuji.

"I started well, and kept his right hand off my belt but I failed in respect to his left," Hokutofuji said.

Two-time champion ozeki Takakeisho showed no sign of the right-ankle issues that dogged him in January as he beat No. 1 Onosho on the jump and quickly shoved him out.

A "kadoban" ozeki after failing to get eight wins in January, Takakeisho needs at least eight here to avoid demotion to sekiwake in May.

Ozeki Asanoyama, who went 11-4 in January, thrust Takarafuji down when the top-ranked maegashira reached too far in his effort to grab a belt hold.

The third ozeki, September champion Shodai, fell to his longtime rival komusubi Mitakeumi, who got the better of the opening charge and never let up until the ozeki had crumpled to the sandy surface. The win improved Mitakeumi's career record against the ozeki to 12-9.

Sekiwake Takanosho shoved out No. 2 Wakatakakage, who missed the January tourney due to the coronavirus.

No. 3 Meisei used a slick "kakenage" hooking inner thigh throw to polish off komusubi and former ozeki Takayasu at the straw after a bruising slapping and shoving bout that raged from one end of the ring to the other.

No. 10 Midorifuji followed up his nine-win top-division debut in January by thrusting down Mongolian No. 9 Hoshoryu.

No. 12 Akiseyama, who surprised the sumo world in January by winning nine bouts at the age of 35 in his second tourney in the makuuchi division, opened with a win against No. 11 Kotoshoho.

Akiseyama, whose ungainly physique belies his lower-body strength and quickness, easily got the better of his opponent before thrusting him down at the straw.

No. 15 Hidenoumi marked his return to the top division for the first time since March 2018 with a win. The 31-year-old and his younger brother, No. 8 Tobizaru, make up the ninth brother duo in makuuchi-division history.

Tobizaru failed to match his brother's success as No. 9 Chiyonokuni beat him on the charge and quickly shoved him out.

In the second tournament held during a state of emergency, a total of 28 lower-ranked wrestlers have been ruled out for coronavirus-related reasons, compared to 65 sidelined in January.

The March tourney is traditionally held in Osaka, where it opened a year ago -- the first grand tournament behind closed doors. But amid the difficulties posed by the ongoing pandemic, the Japan Sumo Association chose to stage its fifth straight tourney in Tokyo.

Injury-plagued yokozuna Kakuryu, who has now withdrawn from his fifth straight grand tournament, was diagnosed with a partial tear to his left hamstring that rules him out for two to three weeks, the JSA said.

Kakuryu, who has long been dealing with elbow and lower back pain, said he does not intend to retire from sumo despite a lengthy layoff throwing his tenure as an active wrestler into question.