Football: Azusa Iwashimizu back on pitch after giving birth to first child

Azusa Iwashimizu, a member of Japan's 2011 Women's World Cup-winning team, has returned to the pitch after giving birth to her first child in March last year.

She is preparing to make her comeback with Nippon TV Beleza, one of the 11 clubs who will contest the inaugural season of the WE League starting in September. The competition is Japan's first women's professional soccer league. 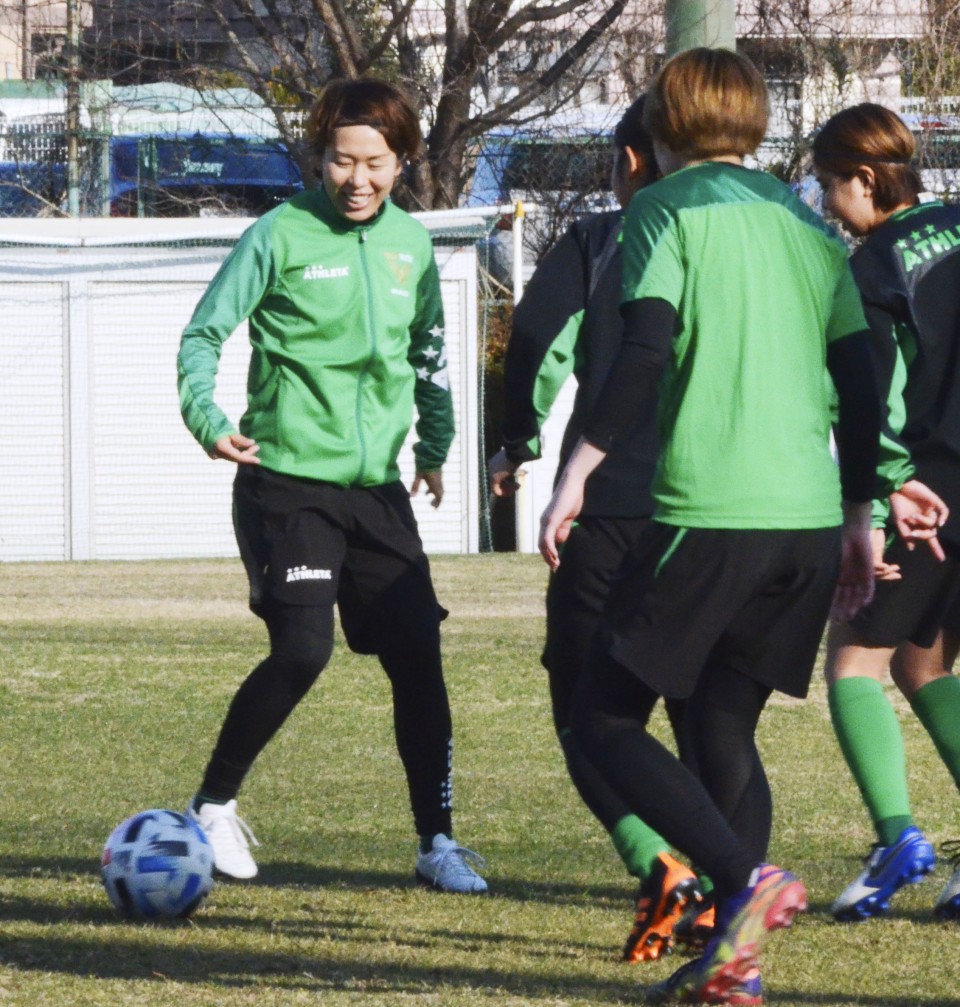 Nippon TV Beleza defender Azusa Iwashimizu (L), who is set to return to the pitch after childbirth, takes part in a training session in Tokyo on Feb. 2, 2021. (Kyodo)

The new-look competition, whose name is an acronym for "Women's Empowerment," will be positioned in the soccer hierarchy above the previously top-flight Nadeshiko League.

Under league rules, more than 50 percent of executives and team staff at each club must be female.

"I want to show the new-and-improved version of Iwashimizu this year," said the 34-year-old center-back, who plans to walk onto the pitch carrying her son.

Iwashimizu spent 20 years with the Tokyo-based Beleza, who won the Empress Cup for a fourth consecutive year in December.

She earned 122 caps for Japan before wrapping up her international career, helping capture the 2011 World Cup in Germany and an Olympic silver medal at the London Games the following year.

Iwashimizu was also a member of the team who lost to the United States in the final of the 2015 World Cup in Canada.

She announced her marriage and pregnancy in October 2019, and came back from maternity leave for her first team practice since giving birth toward the end of last season.

Though she says she is currently working at only about 30 percent of capacity, she is slowly building her way back with an eye to being in top form for the start of the 2021 season.

"I can't sleep soundly (with a baby next to me) but I've trained myself to sleep earlier, which has helped me create a regular schedule," said Iwashimizu, who re-signed with Beleza earlier this month.

Since becoming a parent, Iwashimizu says she has learned to put her own needs aside and be more gentle with others, and that her teammates may notice the difference.

"As a player, my mentality used to be me-first, but now my child comes first," she said.

Known for her tactical nous and ability to read opposing teams, Iwashimizu was named to the Nadeshiko League's Best Eleven for 13 consecutive years until 2018.

Despite her wealth of experience, she is not expecting to walk straight back into the team after a year and a half away.

"I have to fight for a position. I'm fired up to compete," she said.