Large crowds took to the streets of Myanmar for a sixth day on Thursday protesting last week's military coup, with some ethnic minorities joining in the demonstrations.

Protesters once again defied a ban issued Monday on gatherings of more than four people, as well as a nighttime curfew on parts of the country, including the largest city Yangon, the capital Naypyitaw and the second-largest city Mandalay. 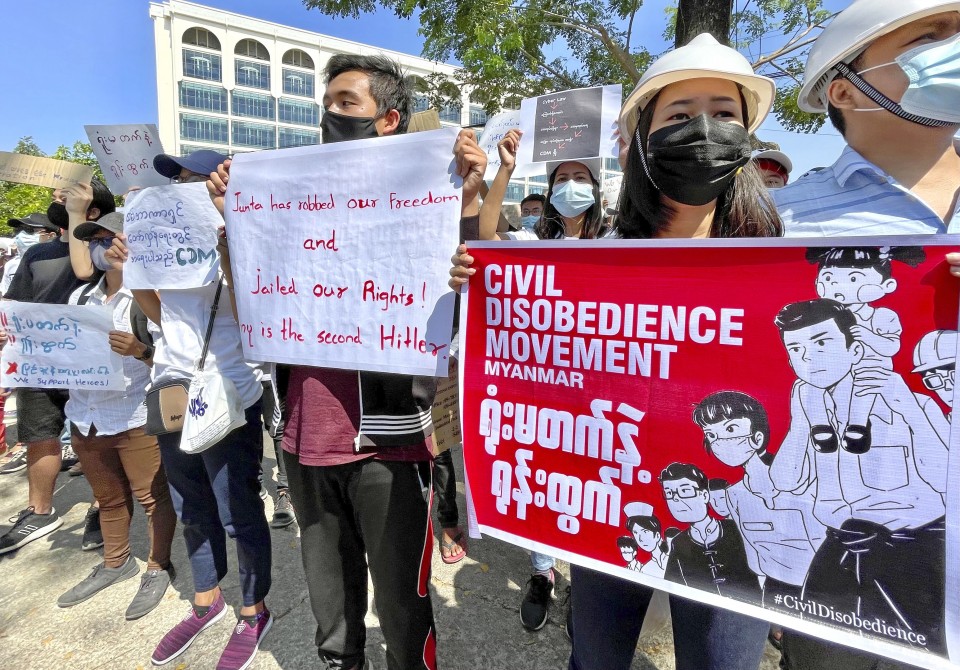 People hold placards during a protest against the military coup on Feb. 11, 2021 in Yangon, Myanmar. (Kyodo)

"We came out at our own risk to join the people. We have been through decades of fear in our lives, so I'd say we have to break free from our fears from now on for our next generations," said a 37-year-old male civil servant who asked to remain anonymous.

The Karen people, one of the largest ethnic minority groups in Myanmar, also gathered in Yangon, shouting slogans such as "Release the illegally detained leaders" and holding flags that read "End the dictatorship."

In Mandalay, Christian groups also joined in the protests chanting, "We need democracy."

The demonstrators are calling for power to be restored to the ousted civilian government of Aung San Suu Kyi and are demanding that she and other detained party members of the formerly ruling National League for Democracy be released.

Myanmar people protest in hundreds of thousands, at least 2 shot

Meanwhile, a close aide to Suu Kyi and four other NLD party executives were taken from their homes overnight and detained, the party's information officer said in a social media post, adding there is, so far, no information on their whereabouts.

On Wednesday in the United States, President Joe Biden announced plans to sanction Myanmar military leaders behind the coup and called for international efforts to pressure the Southeast Asian country to get back on a democratic path.

He also denounced an escalation of police force against protestors peacefully demonstrating against the military rule.

During massive protests on Tuesday, police fired warning shots and rubber bullets, with some injuries reported, including a young woman left on life support after being shot in the head.

The military launched the coup on Feb. 1 after questioning the legitimacy of last November's general election -- in which Suu Kyi's NLD won by a landslide, defeating the military-backed opposition party -- suggesting it was not held freely and fairly.

Large protests erupted Saturday and have been held every day since.