Japan will begin administering COVID-19 vaccine to an initial group of 40,000 health workers on Wednesday, double the number previously planned, the minister in charge of vaccination efforts said Tuesday.

Inoculation of the elderly will begin in April, Taro Kono told a press conference, adding that a second shipment of Pfizer Inc.'s vaccine is set to arrive from Europe next week. 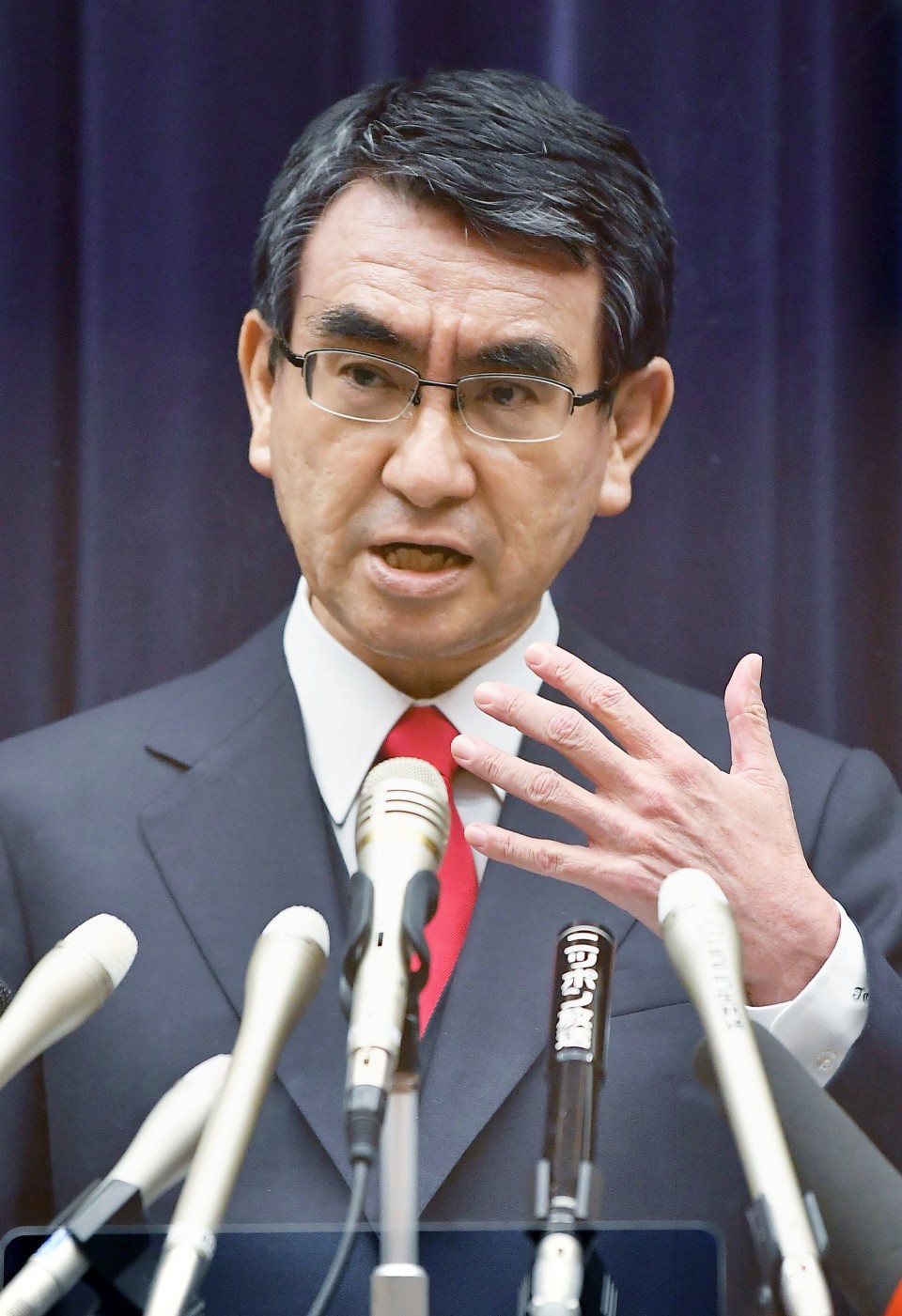 Kono said more health workers than expected had volunteered for a study to track potential side effects and the frequency with which they occur. The study will still go ahead with 20,000 doctors and nurses at 100 hospitals across the country, who will be asked to keep daily records for seven weeks after receiving the first of two shots.

A further 3.7 million front-line health workers will begin receiving the vaccine in March, followed by 36 million people aged 65 or older from April.

People with pre-existing conditions such as diabetes or heart disease and those working at elderly care facilities will come next, then, finally, the general population.

Foreign residents of Japan will also be eligible for free vaccinations in the same order of priority as Japanese citizens, as long as they are registered with a municipality, Kono said.

Public skepticism about vaccines could hamper efforts to inoculate Japan's population of 126 million. Only 63.1 percent of respondents in a Kyodo News poll conducted this month expressed willingness to get a shot, while 27.4 percent said they were unwilling, apparently out of concern for side effects.

"I hope many people will take the vaccine with an understanding of the benefits and risks," Kono said.

Japan received the first batch of 386,100 doses from Pfizer's factory in Belgium last Friday and granted fast-track approval on Sunday based on data mostly from overseas clinical trials.

Kono said the European Union had cleared the second shipment under its new vaccine export controls but declined to say how many doses it would contain.

The bloc's "transparency and authorization mechanism" has fanned concern that Japan, which is starting vaccinations more than two months after Britain and the United States, could fall further behind.

"We will negotiate with the EU to ensure subsequent shipments are approved," Kono said.

Japan is also scrambling to secure low dead space syringes capable of extracting six doses per vial, rather than the five doses typical of syringes available in the country, so that precious vaccine does not go to waste.

Kono said the shots for the initial group of 40,000 health workers would be administered using the existing stock of low dead space syringes and that officials were making "assiduous efforts" to procure more syringes of the same type. 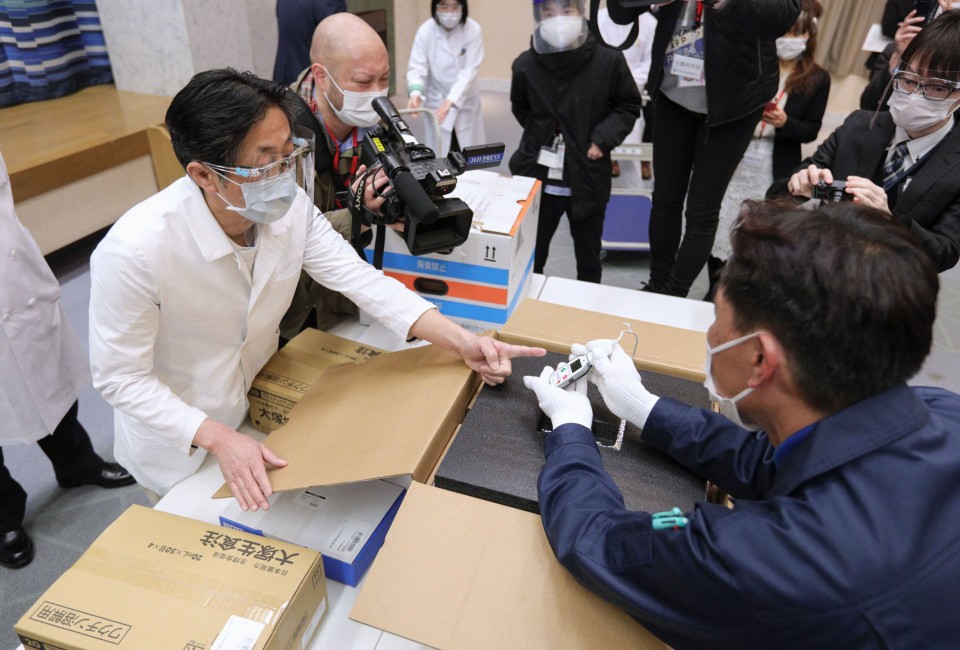 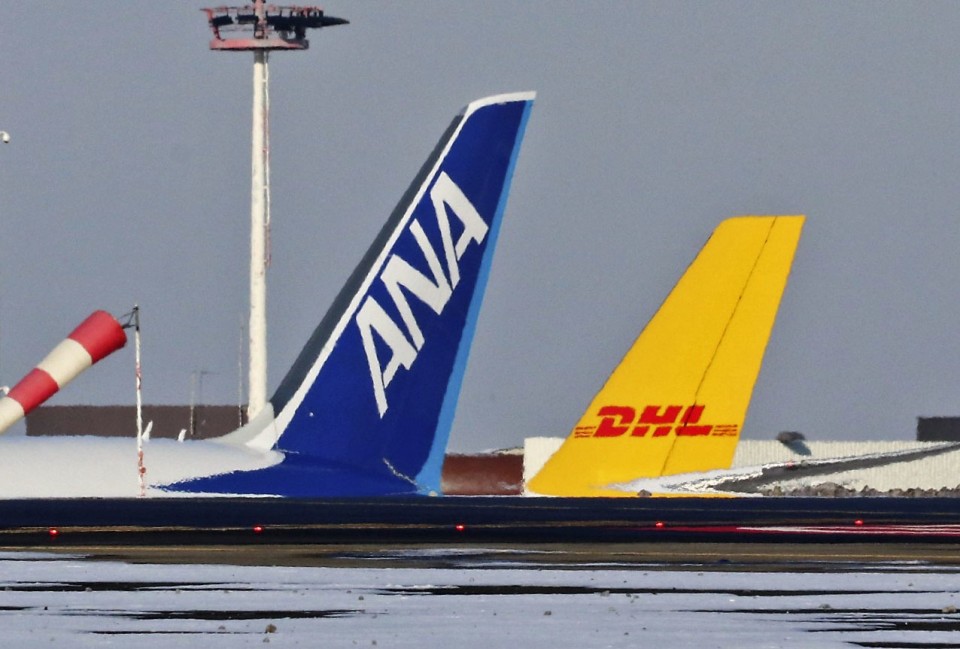 Photo taken on Feb. 11, 2021, shows an All Nippon Airways plane at Brussels airport. The plane departed for Japan later in the day with coronavirus vaccines manufactured at a Pfizer Inc. plant in Brussels. (Kyodo) ==Kyodo