Rui Hachimura credited the Washington Wizards' team defense for helping them wrestle their way to a gritty 103-100 victory over the Miami Heat on Wednesday.

The 5-13 Wizards, whose season has been interrupted by a coronavirus outbreak along with several injuries, overcame a 10-point halftime deficit on the way to their second win in three games. 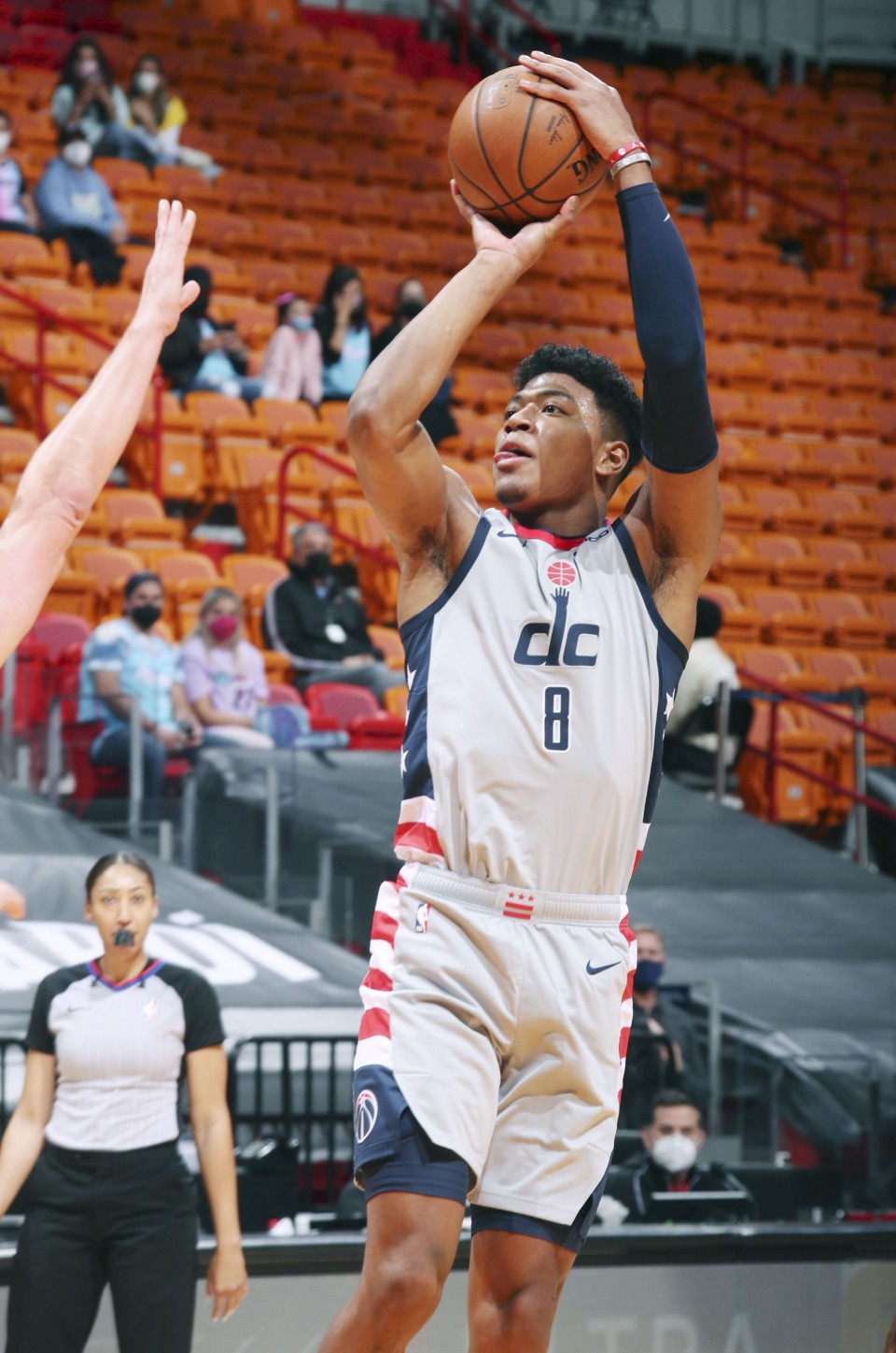 Rui Hachimura (8) of the Washington Wizards shoots the ball during a game against the Miami Heat on Feb. 3, 2021, in Miami, Florida. (Copyright 2021 NBAE)(NBAE/Getty/Kyodo)

A day after scoring a season-high 24 points in a 132-121 loss to the Portland Trail Blazers, Hachimura struggled with his shot but found other ways to contribute at Miami's American Airlines Arena.

Hitting just 3-of-11 on his way to 11 points, he pulled down nine boards and dished five assists while drawing the key defensive assignment on Miami's All-Star forward Jimmy Butler.

"Tonight, we played really good defense, and we got the win," Hachimura said.

"I missed a lot of shots, but you know, defensively, rebounds, my passing, I think it was good. I always play for the team, and tonight we had a great team win."

The Wizards were once again led by All-Star Bradley Beal, who scored 32 for his 17th straight 25-point game, the most by an NBA player to start a season since Michael Jordan did it in his first 16 games of the 1988-89 season.

Shooting guard Tyler Herro was the top scorer for the Heat with 20 points, while Butler contributed 19.

Hachimura said he had been prepared for a physical battle against Butler, who led Miami to last year's NBA finals and is widely regarded as one of the league's toughest competitors.

"He's one of those guys (who'll) try to (draw) a foul, he'll try to get into your body, so I had to be strong," Hachimura said.

Despite his offensive struggles, the second-year forward said he had the continued support of Wizards head coach Scott Brooks and his coaching staff on Wednesday night.

"They just told me to be aggressive, both offensively and defensively (and) communicate," Hachimura said.

Turning his attention to the postponed Tokyo Olympic Games, Hachimura said he looked forward to battling for Japan in a difficult group featuring world No. 2 Spain and No. 4 Argentina.

"I'm really excited. We'll be playing Argentina, where (Japan coach Julio Lamas) is from, so I'm really looking forward to that match," he said.

"(Spain and Argentina) are both really strong, so we have to continue improving as a team."