Kengo Suzuki set a Japan men's record in winning the 76th and final running of the Lake Biwa Mainichi Marathon in 2 hours, 4 minutes and 56 seconds on Sunday.

The 25-year-old took the sole lead around the 36-kilometer mark and had enough left in his tank to increase the pace toward the finish line as he eclipsed the previous record of 2:05:29 set by Suguru Osako at last March's Tokyo Marathon. 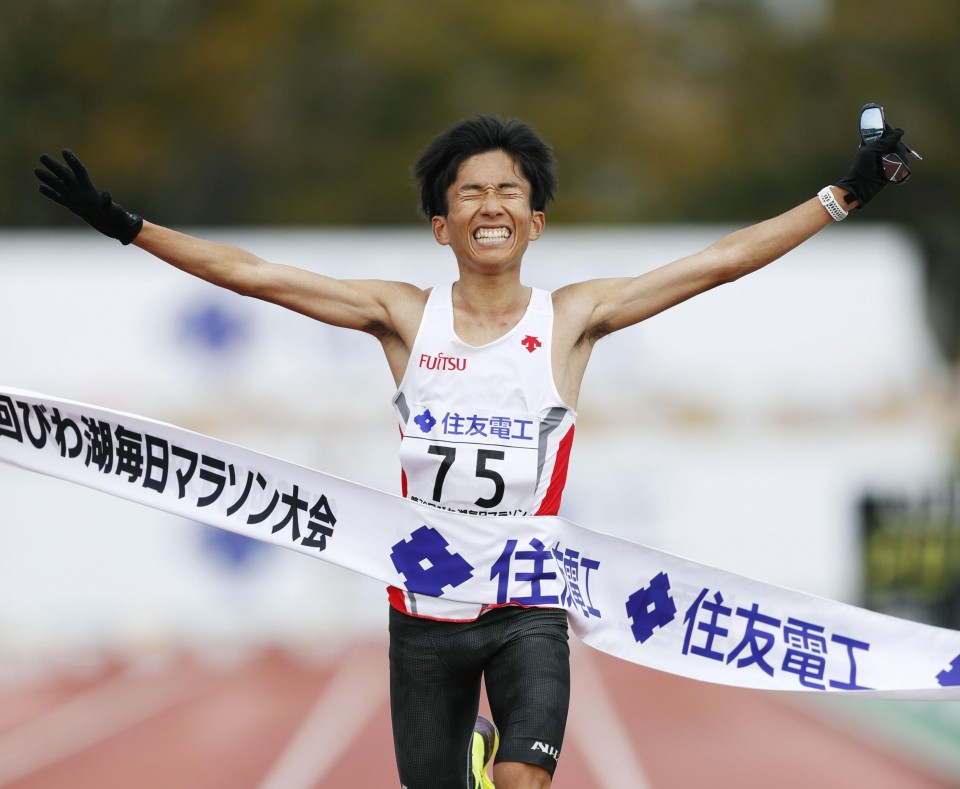 "I hadn't thought I'd get a time like this. I'm as surprised as anyone," Suzuki said. "Winning the race was the thing I was going for."

"I felt I was unable to establish a rhythm over the first 10 kilometers, but after 20, 25 kilometers I found it. Up until now my pace has slackened after the midpoint, so I was hoping I could overcome that as I ran."

Suzuki, a native of Ehime Prefecture, was seventh at the Tokyo Olympics domestic qualifying race in September 2019 and failed to make the team. His previous personal best was 2:10:21.

"I was thinking of how I could time (my breakaway)," he said. "When I failed to grab my water bottle, I thought my only chance would be as the other runners drank, so I went for it."

Suzuki was 12th here last year but pulled off his feat in the final edition of the Lake Biwa Mainichi Marathon. The race held in Shiga Prefecture, will next year be merged into the Osaka Marathon.

"I've been training all along with that frustration (from last year) in mind," he said. "I made careful use of speed and weight training. I was able to train well."

"I'm really proud to have set the Japan record in the last (edition of the) race," added Suzuki, who is eyeing an Olympic appearance in three years' time.

"I'm practicing with Paris in my sights. I hope I can gradually improve in order to run with Japan's flag (on my kit)."

Spectators were asked to refrain from cheering on the sidelines at the race as a coronavirus countermeasure.

The event, first run in 1946 in Osaka, moved to Shiga in 1962. But top runners have recently been opting to run the Tokyo Marathon, held around the same time of the year and said to produce better records.

Toshihiko Seko, who booked his berth for the 1988 Seoul Olympics by winning that year's Lake Biwa Marathon, said, "It was a fitting finale and wonderful. It was a history-changing race." 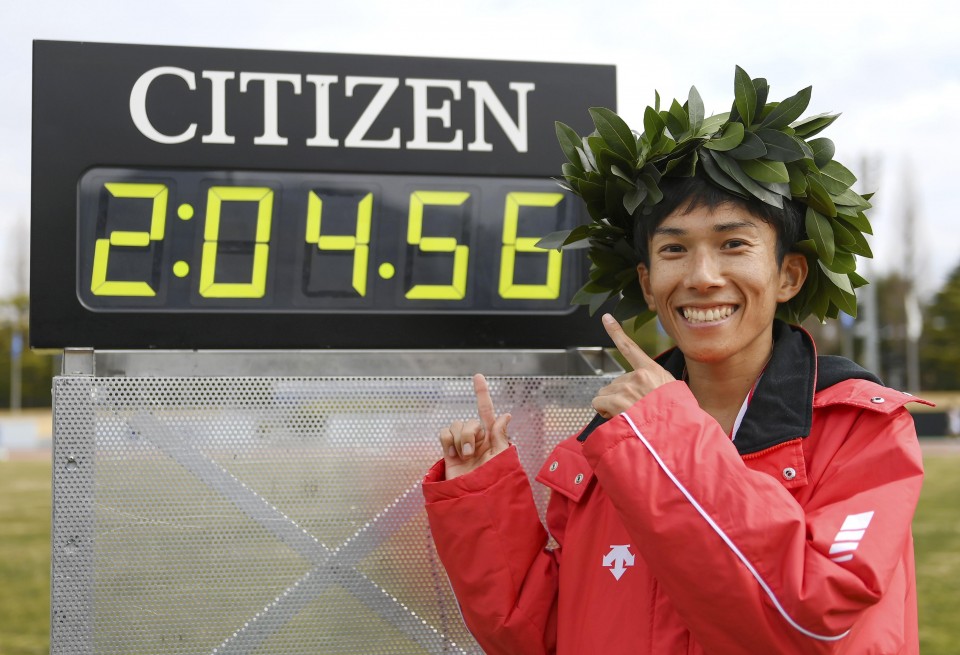 Kengo Suzuki poses for a photo after setting a national record of 2 hours, 4 minutes, 56 seconds at the Lake Biwa Mainichi Marathon in Otsu, Japan, on Feb. 28, 2021. (Kyodo) ==Kyodo