Japan is at a gender equality crossroads and if it is not ready to acknowledge the existence of misogyny and sexism and change now we cannot expect it to change for the next few decades, says Gon Matsunaka, head of Japan's first permanent LGBTQ center.

Matsunaka, who heads Pride House Tokyo Legacy which was recognized as an official program by Tokyo Olympic and Paralympic organizers, said in a telephone interview with Kyodo News on Wednesday that Yoshiro Mori's scandal has just scratched the surface of a big problem.

"Our purpose is not to battle over Mr. Mori's fate," he said of the president of the Tokyo Games organizing committee who announced his resignation Friday following a backlash over sexist comments. 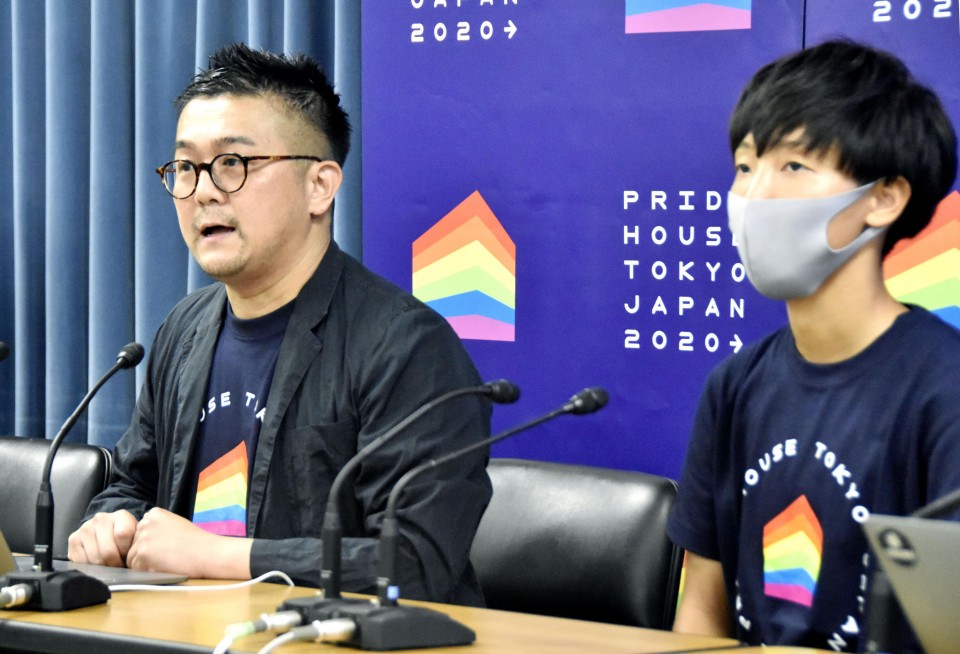 Gon Matsunaka (L), head of Pride House Tokyo Legacy, tells the media about the Olympics project to raise awareness of LGBTQ rights at a press conference in Tokyo in September 2020. (Kyodo)

On Monday, Pride House Tokyo sent an open letter to the games' organizers requesting future action in response to Mori's comments and clarification on their sexual harassment policy, including prevention measures and consequences for violations.

Mori, an 83-year-old former Japanese prime minister, made derogatory comments about women in a Japanese Olympic Committee meeting on Feb. 3. He said meetings with many female participants "drag on" as women have a tendency to talk too much, driven by a "strong sense of rivalry."

Mori's sexist remarks and the chain of events that followed got the lion's share of the headlines for days, but Matsunaka said Mori has only thrown the spotlight back onto Japan's gender discrimination problem and it is time to hold its sexist society accountable.

"The underlying cause of the problem is in a world systematically distorted by male domination," he said.

The 44-year-old Matsunaka, who has come out publicly as gay, also touched on JOC council members who joined Mori in laughing at his sexist jokes and others who stayed silent as examples of a country that normalizes and supports sexism.

"We shouldn't just be putting out this little fire, but we should take this as an opportunity to shift our thinking and fix the root cause," he said.

The postponed 2020 Olympic Games, which are set to take place in Tokyo from July 23 to Aug. 8 this year, are promoting "diversity and harmony" as a key concept.

Matsunaka says the whole world is watching how that message will be expressed through the games, especially after the inclusion of sexual orientation in the anti-discrimination clause of the Olympic Charter.

In 2018, Tokyo adopted an anti-discrimination ordinance aimed at protecting the LGBT community in line with the charter.

Pride House Tokyo Legacy, which will host events as part of the Olympics and Paralympics, will remain as a community hub for sexual minorities after the games end.

The center in Tokyo's Shinjuku Ward is supported by 20 embassies in Tokyo, a number of companies including longtime IOC sponsor and electronics giant Panasonic, individuals and nonprofit organizations.

"Since we've been officially recognized by Tokyo 2020, our LGBTQ program has expanded, and we plan on working together with the organizing committee. It would be great to see all those promoting gender equality and other causes cooperating with one another," Matsunaka said.

"Japanese sport has had many systemic issues such as the antiquated use of physical violence as a coaching technique, but I hope we can put an end to them once and for all."