Japan will strengthen efforts to support Asian countries' shift from coal to liquefied natural gas for use in power generation to reduce carbon emissions, in the hope of lowering procurement costs for the energy source, the industry ministry said.

Japan, the world's largest LNG consumer, expects increased demand for the fuel, which is less polluting than coal, to lead to greater production by countries in the region and a diversification of suppliers, the Ministry of Economy, Trade and Industry said.

Japan is looking to broaden LNG procurement from its main suppliers such as Australia, Qatar and the United States to include more Asian producers, which mostly do not have sufficient infrastructure for exports. 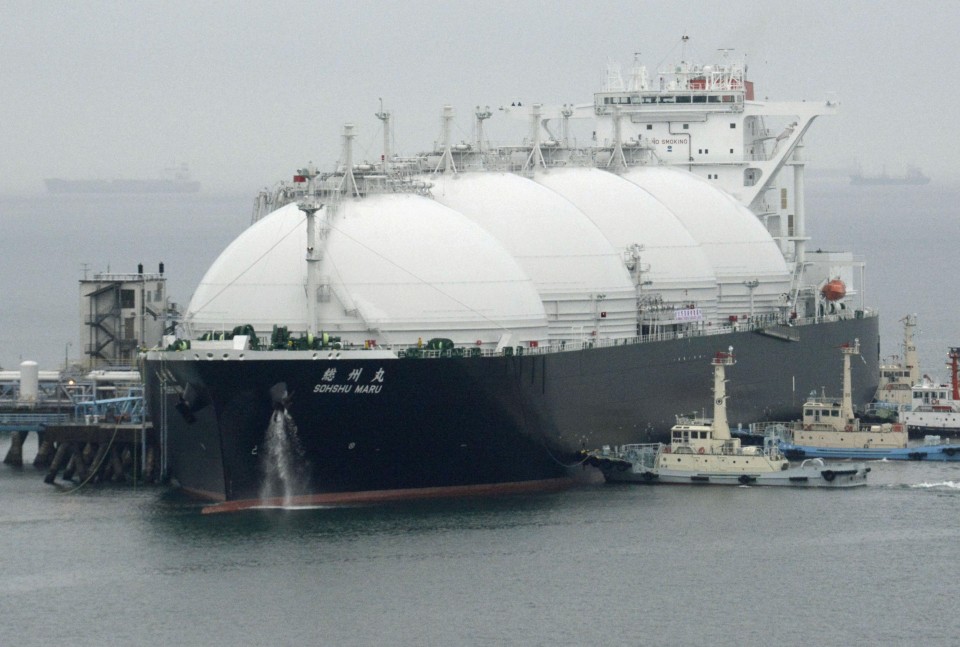 A ship carrying liquefied natural gas arrives at a pier near a power station of JERA Co. in Kawagoe in the central Japanese prefecture of Mie on Jan. 23, 2020. The shipment marked the first delivery to Japan of LNG under the Freeport LNG Project in Texas, in which JERA and Osaka Gas Co. have taken part. (Kyodo) ==Kyodo

The efforts to reduce purchasing costs and ensure stable supply come as the country faced a depletion of LNG stocks amid unseasonably cold weather this winter.

The world's third-largest economy, which relies on LNG for nearly 40 percent of total power generation, doubled its public-private investment initiative to $20 billion in 2019 to help Asian countries build LNG terminals, storage tanks and other facilities necessary for shipments overseas.

LNG is mostly traded under long-term contracts with prices linked to those of crude oil. Such trading makes it difficult to procure LNG in a timely manner at prices based on supply and demand conditions.

Japan hopes more producers and buyers would make it possible to establish an LNG market with flexible pricing.

Coal is still a major fuel source for rapidly growing economies in Southeast Asia, such as Indonesia and Vietnam, due to its affordability. But LNG produces around half the carbon dioxide emissions that coal does when burnt for power generation.

If seven Asian countries -- India, Indonesia, Vietnam, the Philippines, Malaysia, Thailand and Myanmar -- shift from coal-fired to gas-powered plants, it would reduce carbon dioxide emissions by around 864 million tons, equivalent to 71 percent of Japan's annual greenhouse emissions, according to ministry data.

It is estimated such a shift would create additional LNG demand of 166 million tons, more than double Japan's annual imports, the data showed.

Japan's imports of LNG rose sharply in the absence of nuclear power generation following the Fukushima Daiichi nuclear crisis, triggered by the devastating earthquake and tsunami in the northeast of the country in March 2011.